With the recent passive-aggressive threats coming out of Edmonton in relation to a potential move of the Oilers to Seattle, one can’t help but think of the deep devotion that all Canadians have towards the game of hockey, and the absolute travesty that it would be for another team to move South of the border. As such, it’s high time that hockey fans from sea to shining sea don the blue, orange & white of the Oil & rally around this team in the hopes that their young core might grow together in Alberta and bring the Cup back to the true north, strong and free … right? 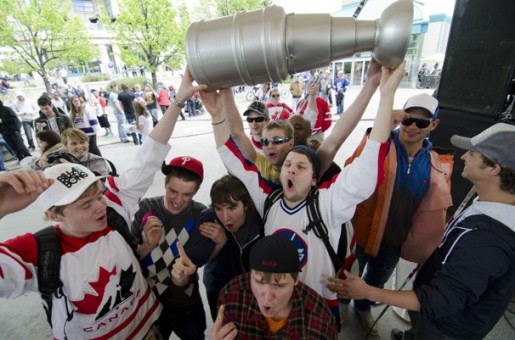 Nope. At least not entirely.

First of all, let me say that it’s entirely unobjectionable for Canadians to espouse the notion that there should be as many NHL teams as possible in this country; our hunger for hockey is largely unrivaled, and it would indeed be a travesty for a storied franchise such as the Oilers to pack up and head out of town.

Having said that, the idea that all Canadians must actively cheer for the success of all Canadian teams constitutes one of the great lies that we are sold as hockey fans. On top of that, the notion that the Cup “belongs in Canada” is also terribly misplaced. The reality is that there is absolutely no obligation for any fan of the NHL to support another team simply as a matter of geography, and, as it happens, the Cup often spends a large part of its summer in Canada as a result of the makeup of the team’s roster, not because it was won by a Canadian team.

Allow me to speak from personal experience for a moment. I grew up as a Bruins fan, largely in the context of the current divisional / conference format, so simply as a matter of rivalry, it would be incredibly difficult (if not entirely impossible) for me to bring myself to support the Canadiens or the Leafs (the former as a matter of long standing tradition, the latter more recently as a result of dealings between the two clubs). At the same time, the 2011 Cup Final against the Canucks would eliminate all probability of me supporting Vancouver in the future, as that rivalry has entered a domain that demands full club loyalty, at all times. So the simple fact that my team of choice is from an American city with rivalries with a few Canadian teams would preclude me from cheering for at least 3 of the 7, right off the bat.

Now, on the flip side, given the fact that I grew up in Ottawa, I will admit that I do have a spot for my hometown team, and did in fact get caught up in the excitement of their ’07 run, albeit while living in Manitoba. And hey, since I did live south of Winnipeg for 2 years, I was pumped about the return of the Jets, and would get behind them in the future, provided that it did not conflict with my first hockey love from Boston (same with the Sens on that point, in fact).

Personal preferences aside, one major question to consider is this: what makes a team more Canadian – where they play or how the roster is made up? Let’s use the Calgary Flames as an example of the difference between supporting a Canadian team (ie: city) and a Canadian roster. Jump back to the 2004 Stanley Cup Final. The Flames, led by a good Canadian boy in Jarome Iginla, pushed the Lightning to 7 games, only to lose a Cup to a team based in Florida. What a sham, right? Again, nope. While this idea of “supporting Canada’s team” was running rampant, there were many who were very much supporting Tampa Bay based on the the fact that their roster was made up of several incredibly talented Canadian players, including Brad Richards, Vincent Lecavalier, Martin St. Louis & Dan Boyle, among others. When the Senators made it to the Final against the Ducks, would it have been treason to support Anaheim? Not when their roster featured names like Pronger, Niedermayer, Getzlaf, Penner, Perry, McDonald, Kunitz, May, Thornton (et al).

To build on that, teams containing several Canadians will no doubt have folks from their respective hometowns rooting for them with all their hockey loving hearts, regardless of whether or not it will visit Parliament Hill as opposed to the White House (the good people of Flint, MI aside, thanks to Tim Thomas). Why? Because based on the tradition of every member of the team having the opportunity to spend one day with the Cup, chances are it could come to a town near you during any given summer. Again, to speak from personal experience, it was a thrill for me to be able to combine my joy over the Bruins winning the Cup with the ability to head down to the Sleeman Centre here in Guelph to get my picture taken with Rich Peverley & that beautiful silver mug. In fact, the place was packed with fans of the black ‘n’ gold, all thrilled to death that the Canucks had failed to “bring the Cup home.”

All this to say, let’s put any talk of “getting behind Canada’s team” to death, shall we? For one thing, being a serious fan negates any real fluidity in terms of backing a rival, and quite often a team’s makeup makes it more Canadian than the city in which it plays. But above and beyond all that, the real problem that needs to be eliminated here is the “us vs. them” mentality when it comes to hockey. We may possess the most recent Olympic Gold Medal, but Canada certainly doesn’t own the game of hockey. They are legitimate fans of this game all over North America & the world, all with a passion for seeing their favorite teams or homegrown talent succeed in the NHL.

To reiterate, Edmonton without the Oilers would be like peanut butter without some jelly; they truly, madly and deeply belong together.

Just don’t ask me to root for them on the ice.