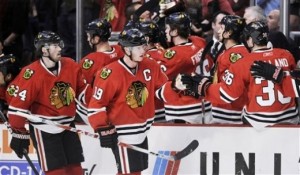 It happens every season in professional sports: the “experts” weigh in with their predictions on how the coming season will unfold. They forecast standings, statistics, playoff outcomes and award winners. And, invariably, they typically have the success rate of your local weatherman. Sure, sometimes the hunches come true but, just as often, there are those teams and individuals that surprise you. That’s why they play the games, though, right? So roughly halfway through this 2013 season, here is a look at the NHL’s three most pleasant performances from either a team or an individual standpoint.

Without question, the Ducks underachieved last year. Corey Perry followed up his Hart Trophy winning season with a 60 point campaign, 38 less than his MVP year. Off-years from fellow stars Ryan Getzlaf and Bobby Ryan helped doom Anaheim’s season as they finished 13th in the West. In fact, the team’s best player was the ageless Teemu Selanne. And while Selanne was a nice story, having a 41 year old not named Nicklas Lidstrom as your best player, as the Ducks found out, is often a recipe for disaster.

What a difference a year makes. While most people expected Anaheim to compete for a playoff spot, nobody saw this coming. Through 26 games, the Ducks sit first in the Pacific Division and second in the Western Conference. They have a nearly insurmountable 13 point lead over the defending champion Los Angeles Kings in the division and are within four points of the Chicago Blackhawks – you know, the same team that set a league record for games to start a season without a regulation loss – for the conference lead. Getzlaf, fresh off of his newly signed contract extension, sits eighth in league scoring with 31 points and the team as a whole is +25 in goal differential. In net, Jonas Hiller and Viktor Fasth have combined to give up only 64 goals, tied for second best in the Western Conference.

It’s not a surprise that the Chicago Blackhawks are having a good season. In fact, it’s not even that big of a surprise that they lead the Western Conference. After all, they have the likes of Jonathan Toews, Patrick Kane, Marian Hossa and Patrick Sharp. That’s a pretty potent attack. What is a surprise is the utter dominance they began the season with. The Blackhawks set an NHL record for games to start a season without a regulation loss and flirted with the Philadelphia Flyers record of 35 consecutive games overall without a regulation loss.

Chicago’s ability to put the puck in the net was never in question. And true to form, the Blackhawks are second in the West with 87 goals in 27 games. Patrick Kane leads the way with 31 points and seems to relish making an absolute mockery of goaltenders when the ‘Hawks reach a shootout.

No, the main question people had about the Blackhawks came from between the pipes. Specifically, how would Corey Crawford and Ray Emery hold up? Well, despite Crawford having some issues staying healthy, the tandem has played exceptional. Having surrendered only 59 goals, Chicago boasts the stingiest goals against average in the West and is third in the league. Despite a “rough patch” in which they have dropped two of their last three, the Blackhawks have positioned themselves to make another deep run in the playoffs this postseason.

Chris Kunitz is one lucky individual. He spent last season as a winger for Hart Trophy winner Evgeni Malkin and subsequently set or tied career highs in goals (26), assists (35) and points (61). Coming into this season, though, it wasn’t enough to stick on Geno’s line. Had he been demoted? Nope. Just moved to play alongside arguably the other greatest offensive player in the world, Sidney Crosby. Boy, has he responded. He leads the league in plus/minus (+23) and sits second in goals (18) and points (39). In fact, he’s on pace to set new career highs in goals, assists and points in a 48-game season. Not bad for an undrafted free agent.

Ottawa broke out last season in large part due to stellar goaltending and the emergence of last year’s Norris Trophy recipient Erik Karlsson. People were expecting them to take the next step this season after their surprise run to the playoffs last spring. So the fact that they sit fifth in the East wouldn’t be that big of a surprise…if it weren’t for all of the injuries. Sure, every team has to overcome injuries but the Senators have been absolutely decimated. First, Jason Spezza went down with a herniated disc in his back and could be out for the season. Then Karlsson had his Achilles partially severed by a skate blade and will miss the rest of the year. As if that wasn’t enough, Craig Anderson then went down with a sprained ankle and has yet to return to action. So what have the Senators done? Packed it in for the season and wait for arguably their three best players to return, whenever that is? Hardly. Ottawa still boasts the second ranked defense in the East, having given up only 58 goals in 27 games as they sit in fifth place in the conference. Despite losing so much talent, it looks like they may fight and scrap their way to a playoff spot.

Last season, Montreal finished dead last in the East with 78 points. Most people weren’t expecting a vast improvement under new coach, Michel Therrien. After all, this was a team that was supposed to be rebuilding. Um, wrong. All the Canadiens have done is climb to the top of the Eastern Conference, racking up 40 points through 27 games. Possessing a balanced attack that features 12 skaters having already reached double digits in points and steady play in net from Carey Price, Montreal finds itself in a dogfight with the Bruins for the Northeast title.

If not for Kunitz’s monster season, Voracek would be the surprise player of the season, hands down. A cast-off of the Columbus Blue Jackets (no, seriously), Jakub has been the one bright spot in an otherwise miserable season for the Flyers. He paces the club with 31 points and is primed to shatter his career high in goals, needing only five to reach last year’s total of 18.