Though overlapping injuries to Johnny Boychuk and Travis Hamonic have thinned the Islanders’ blueline, they have also proven the team can survive without them. And with Hamonic set to return as early as Friday and Boychuk likely to crack the lineup after the All-Star break, their injuries may become a blessing down the road.

For the players who are healthy, there’s the benefit of increased confidence. The team has needed to raise its collective play without two of its top defensemen, and the Islanders have generally answered the bell. When injuries confront this group again, as they inevitably will, it will face the challenge with a steely gaze.

But this is more about the message sent to GM Garth Snow and the rest of the Isles’ management. In the past four games without Boychuk and Hamonic, Snow and his confidants have learned the Islanders are deeper defensively than they may have thought. With the team in dire need of another difference-maker up front, management can feel confident in drawing from its defensive assets to facilitate a trade. 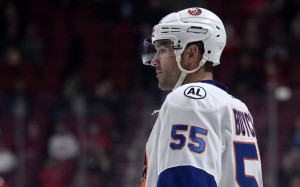 The Islanders have been without Boyhcuk for three weeks, but have managed to stay competitive. (Eric Bolte-USA TODAY Sports)

In exchanging current NHL players, the worry for most GMs is robbing Peter to pay Paul. One area of the roster is made stronger, another is made weaker, and the team is more or less left where it started. But in light of the Isles’ ability to weather the storm without Boychuk and Hamonic, Snow has to see a surplus in his roster waiting to be exploited.

The Islanders lost Boychuk on Dec. 31. Seven days later they lost Hamonic, and suddenly everyone on the blueline was bumped up a couple of spots. It began with Calvin de Haan assuming first-pair minutes with Nick Leddy and trickled down to Bridgeport, where Adam Pelech and Scott Mayfield were summoned to Brooklyn. As a group, the defensemen have rallied in the face of adversity.

That’s not exclusively the work of the defensemen, of course, and it’s likely the forwards have pledged a broader commitment on the defensive side of the puck to compensate for a compromised blueline. Still, the team has managed to grab points in three of four games without needing to light the lamp like a Christmas tree (or a Menorah), and it stands to reason such play is sustainable. 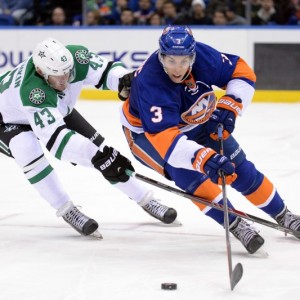 Travis Hamonic is likely to return Friday, but his days in Brooklyn appear to be numbered. (Joe Camporeale-USA TODAY Sports)

(The continued excellence of Jaroslav Halak is relevant here too, and further impetus for trading a defenseman. His effect has been as big as any on the team’s strong response to injury, and his play over the course of the year certainly gives Snow some wiggle room in handling his defensive corps.)

Look, four games isn’t a great sample size, and the overall numbers are admittedly skewed by the Isles’ dominant performance against the Canucks – a game they ironically lost. But it’s hard to overstate how crippling these injuries could have been given their coincident timing, and the Islanders have pressed on without much of a drag.

If it was one defenseman on the shelf, or two depth defensemen, the team’s current level of play likely wouldn’t embolden management to make a deal, certainly not at the expense of the blueline. But we’re talking about two of the Isles’ top defensemen – heck, two of its very best players – so the takeaway from this situation carries substantial weight.

Honest self-evaluation is critical to a team’s front-office approach, and the Islanders have taken a pretty square look at themselves without Boychuk and Hamonic. They have to like what they’ve seen.

For as the trade deadline nears and the team looks to improve, Snow and those around him will have the benefit of knowing neither Boychuk nor Hamonic is an indispensable part of the puzzle.