After the season wrapped up a couple of weeks ago, general manager Ken Holland and coach Mike Babcock mentioned that they would like to add a right-handed top-four defenseman in the offseason. For those that have been living under a rock and haven’t noticed, the Wings are loaded with left-handed shooters. In fact, the Wings only had four right-handed players on their roster this past season, and there is a possibility that all four will be gone this offseason. The importance of the right-handed shooting defenseman is often stated but not well understood. However, Wings’ fans have surely noticed the difference in the power play over the last few years since Brian Rafalski retired. In Rafalski’s last season (2010-2011), the Red Wings power play scored on 22.3% of its chances, 5th best in the league. Since his retirement, the Wings have posted power play numbers of 16.1% (22nd), 18.4% (15th), and 17.7% (18th). If you then look at the top power plays from the past three seasons, you see Nashville in 2011-2012 (Shea Weber), Washington in 2012-2013 (Mike Green), and Pittsburgh this season (Matt Niskanen, Kris Letang). It’s clear that a right-handed defenseman is key to a successful power play.

Why is a Right-Handed Defenseman Important?

After seeing statistics indicating that a right-handed defenseman is important, you’re probably wondering what exactly they do that makes them so invaluable. Take a look at the diagram below. 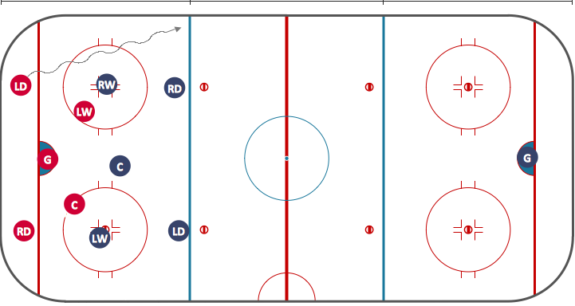 This diagram depicts a typical power play unit in the offensive zone when they are not in possession of the puck. The defensive team has the puck and is getting ready to clear it. If both your defenseman are left-handed, then it will be easier for the defense to clear it up the boards indicated by the arrow. This is because the offensive right defenseman (blue) is left-handed and his stick will be in the middle of the ice. It will be near impossible for him to keep the puck in if the defensive defenseman (red) puts the puck high and off the boards. Now, imagine that the offensive right defenseman is right-handed and the offensive left defenseman is left-handed. Think about the same clearing attempt. This time, when the penalty kill unit attempts to clear the puck, both defenseman will have their sticks to the boards, giving them both the opportunity and ability to knock the puck out of the air and keep it in the zone. This was a skill that former Red Wing great Nicklas Lidstrom had and it drove the opposition crazy.

Shots to the Middle 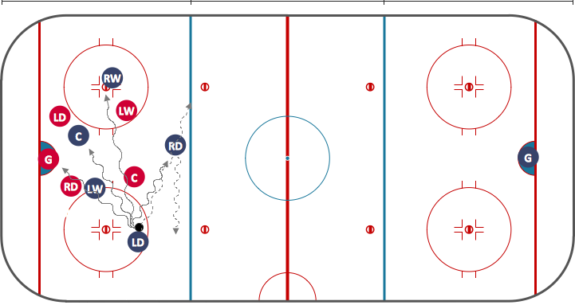 This diagram depicts a standard umbrella power play. The puck is currently with the left defenseman and his passing options are detailed by the solid arrows. He can throw the puck to the net from where he is and hope for a deflection from his left-winger. He can attempt two different cross-slot passes to either his center or right wing. Finally, he can pass to the right defenseman. Ignore those passing routes and instead focus on the dashed lines, which indicate skating options. The left defenseman can “walk the blue line” and switch point positions with the right defenseman. This will put the sticks of both defenseman in the middle of the ice, allowing for easy one-timers. Nobody was better at walking the blue line than Lidstrom and Rafalski. The video below shows a classic example of how the two of them switched to put their sticks in the middle of the ice, allowing for easier one-timers.

As of right now, the Wings have five defenseman under contract for next season (Niklas Kronwall, Jonathan Ericsson, Jakub Kindl, Brendan Smith, Brian Lashoff), one restricted free agent (Danny DeKeyser) and one unrestricted free agent (Kyle Quincey). I touched on the signings of these guys in my breakdown of Detroit’s offseason gameplan, but to reiterate, DeKeyser will absolutely be re-signed and Quincey in my opinion is gone. There is no situation in which I think Holland brings Quincey back due to the amount of money he will ask for. Assuming that DeKeyser re-signs with no issue, that leaves the Wings with six defenseman on the active roster.

Jakub Kindl is another guy that might be on the move. At 27 years of age, he should be at his prime but he was often scratched due to weak play. He simply was not aggressive enough and Mike Babcock would like to avoid relying on him for 82 games. If Kindl is still on Detroit’s roster, a best case scenario would be for him to be the 7th defenseman. That leaves Detroit with one to two possible openings, depending on if Kindl is traded or not. I personally don’t think Kindl will be moved as he would likely not command more than a mid-round pick and lower-tier prospect. He’s locked in through 2016-2017 at a $2.4 million cap hit so he’s most likely not going anywhere. So, who fills the open spot on Detroit’s blue line?

Who Will be the Right-Handed Defenseman for Detroit?

How should the Red Wings go about obtaining a right-handed defenseman? The Wings truly have three options, as they have ample salary cap space to make a trade or sign a free agent. The third option involves filling the position internally.

A trade seems most unlikely for the Wings, because with any trade, the Wings have to part with somebody. With most of Detroit’s prospects and draft picks being off limits, the Wings will have to deal a player off their active roster. The one guy that I could see Detroit moving is Johan Franzen. In 2008, Franzen put on a show for the ages, recording 13 goals in 16 playoff games, including nine goals in the four-game sweep of Colorado in the 2nd round. In fact, from 2008-2010, Franzen scored 31 goals and 59 points in 51 playoff games. In that same timespan, Sidney Crosby recorded 27 goals and 67 points in 57 playoff games, Alex Ovechkin tallied 20 goals and 40 points in 28 games, and Henrik Zetterberg scored 31 goals and 66 points in 57 playoff games. Clearly, Franzen was a superstar performer.

However, in the four playoff campaigns since, Franzen has been invisible, scoring 7 goals, 12 points and is a terrible -11 in 32 games. He’s lost, inconsistent, and is only slowing down. However, a team desperate for offense, such as Buffalo or Winnipeg may be willing to take a chance. Specifically, Winnipeg may be willing to part with defenseman Dustin Byfuglien. While not a stalwart on defense, Byfuglien would bring much needed offensive boost to the Wings’ blue line. Franzen’s cap hit is $3.95 million and Byfuglien’s is $5.2 so the added salary would not be that significant. The only issue would be Franzen’s length of contract. He is currently under contract through 2019-2020 and the Wings may have to deal with a recapture penalty if he decides to retire early. Regardless, Byfuglien should be the main trade target, followed by Phoenix defenseman Keith Yandle, and Vancouver defenseman Alex Edler. The only issue with Yandle and Edler is that they both are left-handed shooters.

We know Ken Holland is not going to make an offer to an opposing team’s restricted free agent so we will throw that pool of players out and focus only on the unrestricted free agents. The class of free agents is fairly deep this year. However, one guy stands out and that guy is Pittsburgh’s Matt Niskanen. Niskanen is a right-handed shot, 27 years old, and posted a career year with 10 goals and 46 points. There are a couple of concerns with signing Niskanen though. First, Niskanen is probably going to be the biggest prize on the market in terms of defensemen and will therefore field numerous offers which will drive up his price. I’d expect Niskanen to settle on an offer that gives him $25 million over 5 years. Holland will have to determine if that price is too steep as a cap hit of $5 million would make Niskanen Detroit’s highest paid defenseman and fourth highest paid player behind only Pavel Datsyuk, Jimmy Howard, and Zetterberg. I think Holland would be willing to shell out that kind of cash as Detroit will have $20 million in cap space this offseason according to CapGeek. The real question is whether or not Niskanen will sign with Detroit. The Wings have struck out on high-profile players the last few seasons so this will be an interesting decision.

If the Wings elect to fill the position internally, there are several candidates, however only two are right-handed shots. Ryan Sproul and Alexey Marchenko each saw limited action with the Wings this season but both are highly promising. Sproul is definitely the more offensive-minded of the two and would be the better candidate to fill the open vacancy on the blue line. Unfortunately, neither of these guys are the best overall defensive prospect Detroit has as Xavier Ouellet is the most NHL-ready. I think the Wings will try to avoid solving this problem internally, but will look to get Sproul, Ouellet, and Marchenko playing time this upcoming season.