Another week has passed, and only 14 days of play remain. With every matchup, teams are seeing their magic number drop, whether that is their elimination number or the points required to clinch a playoff spot. The week saw the Pittsburgh Penguins and New York Rangers join the St. Louis Blues with a guaranteed playoff spot, while the Edmonton Oilers became the second team to become mathematically eliminated and shifting their focus to the 2012 NHL entry draft. These teams are not alone, as multiple clubs can seal their fate in the upcoming days, whether that fate be one of glory or of shame.

The playoff bubble also reached dramatic heights. In the Eastern Conference, strong efforts by the Washington Capitals and Buffalo Sabres put them in the midst of an intense playoff race, sitting in 8th and 9th place. The Winnipeg Jets are also not far behind, thanks to a dramatic come-from-behind victory against the Caps. The Ottawa Senators, the team that was once leading the Northeast Division, see themselves hanging on to a playoff spot after a 3 game losing streak. The race for the last 2 spots will be a 4 team affair.

However, the debacle that is the Western Conference playoff bubble puts the Eastern Conference to shame. With Dallas sitting in 3rd with 87 points, the Sharks, Coyotes and Kings sit right behind with just one point catapulting them to the top spot in the Pacific division. Beyond the 3 teams that are not leading the Pacific, the Colorado Avalanche and Calgary Flames are also on the horizon, and can go from 7th to 11th contingent on a win or loss. There is no doubt that this race will not be resolved until the final day of the season, which is April 7th.

As always, the week was more exciting than what the standings showed. Beyond the boxscore, the National Hockey League had its fair share of excitement. Ranging from an arena eating their words to a familiar face jumping the pond to flying elbows, there was many topics of discussion. Here is the week that was from March 18th to March 24th.

The Winnipeg Jets have had one of the more surprising campaigns of the NHL season, pushing hard to claim the final playoff spot in the Eastern Conference. 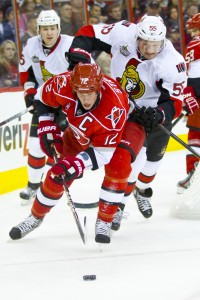 Throughout the year, the Jets have seen themselves near the bottom of the league, and more recently right on the playoff bubble. If the Jets do squeak in, however, it will be because of their home record. The MTS center has been a 7th man on the ice, and has made a horrible road team dominant in Manitoba. The fans have also booed every captain and made taunts to players, such as “Silver Medal” to Ryan Miller and “Crosby’s Better” to Alexander Ovechkin. On Sunday, the Jets faithful decided to bring this recent fad to the arena against the Hurricanes. When Winnipeg took a 3-2 lead, the fans began to taunt Hurricanes’ captain Eric Staal. When he touched the puck, a smaller chant of “Jordan’s Better” started up, referring to Eric’s brother playing in Pittsburgh. Thinking back on it, most fans would agree that might have not been the right thing to do.

Eric Staal had a dominant 3rd period, scoring his 2nd goal of the game to tie it up, and set up Chad LaRose with a minute to go to win the game. The win was not vital for the Hurricanes, but seriously affected the Jets’ chance of advancing to the postseason. Washington had lost earlier, and Winnipeg had the chance to close in on the 8th spot. The Jets currently find themselves on the outside looking in, and the Sabres’ recent surge does not help. Whether or not Eric heard the chants, it’s quite clear that the MTS Center is eating their words, as the “worse” brother seriously hurt the Jets’ chances of making the playoffs.

“Staged fights” are a hot topic of discussion among hockey fans.  The New York Rangers and the New Jersey Devils took this controversy to new heights on Monday night. After coach Peter DeBoer filled out the lineup card first with Boulton, Janssen, and Carter, coach John Tortorella responded. Torts put Dubinsky on the blueline to have Stu Bickel join Rupp and Prust up front. What followed was hardly a surprise. The second the puck dropped, 6 men dropped their sticks and gloves to start 3 separate fights (video can be seen here). The Rangers won the game 4-2, but the war of words did not end. Tortorella and DeBoer bickered back and forth, and the hockey community immediately began to defend their respective decisions on this somewhat delicate issue. Some people strongly believed this was wrong or right, while there was a majority that was rather indifferent.

The consensus seems to be the most reasonable and level-headed response. “Staged Fights” are not really needed, but honestly add no harm. What the series of fights did was immediately raise the stakes of the game, and make the first goal all that more important (which was scored a minute later by Dubinsky). Was it needed? Probably not. These two teams are bitter rivals and the animosity that these two teams share would’ve shown its true colours at some point during the 60 minutes.

In addition, a main reason that fights like these (or fighting in general) will never leave the game is shown in the crowd’s reaction. Looking at the crowd, it did not look like anybody left MSG at that instant, disgusted at the actions. Rather, the crowd was immediately overwhelmed and some fans have gone on the record via twitter, claiming it was one of the best moments they’ve witnessed all year. If this sort of thing was seen all year it would lose its flavour, but seeing something like this due to its rarity seems to make it special and exciting, but nothing more.

The recurring theme of this week was the elbow. Rarely do we see an elbowing penalty, and if so they are minor penalties. However, as seen last season via Matt Cooke, elbows can be a very dangerous part of the body when striking an opponent, especially when caught in the head. On Tuesday, Shane Doan elbowed Jamie Benn and was suspended for 3 games. Not even a week later, Duncan Keith elbowed Daniel Sedin on Thursday night to earn himself a 5 game suspension. On the surface, a combined 8 games of suspension for 2 respected and star players seemed very fair. Despite this notion, a sudden outcry arose. People faulted Brendan Shanahan for being too lenient in his rulings, and that both men should’ve been suspended into the playoffs. The Doan hit did not receive as much attention. The elbow connected with Benn’s head and was deemed blatant by everyone that saw it. Doan had previous offences, and Benn was left uninjured. Taking all of those factors into consideration, 3 games seemed about right. The real controversy lies in the Keith hit.

The Duncan Keith elbow was one of the oddest sequences of the year. Just prior to the Keith’s already infamous blow to Daniel Sedin’s head, the latter player hit the former player in the head with his shoulder. The principle point of contact was the head, there were no sudden movements by Keith, and Keith was not in a vulnerable position. It wasn’t a terribly dirty hit, but it was a hit to the head, which is illegal. This incident makes it too obvious that the elbow to the head was revenge. As a result, the public drew the following conclusions:

Duncan Keith had no right to attack Daniel Sedin in such a violent matter. Sedin’s hit was illegal and should’ve been penalized, but the punishment didn’t fit the crime. Keith is a fantastic player, but his emotions need to be kept in check if he wants to have a long and controversy-free career.

Back from the USSR 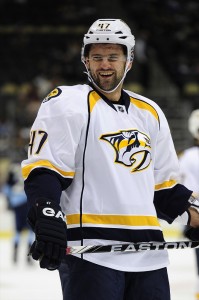 The chronicles of Alexander Radulov have been the talk of the hockey world for quite some time. The talented sophomore had made serious strides with the Nashville Predators in 2008, hitting 26 goals. However, Radulov bolted to the KHL, and his future plans of returning to North America looked hazy. However, this all turned the corner last week, when his team was eliminated from the KHL playoffs. Now, Radulov had turned into the star of Russian hockey, posting great numbers and making dazzling plays. However, he finally decided it was time to return to Nashville, and help the team win the Stanley Cup. On paper, the Predators had received the only piece missing from their arsenal of weapons, which was a sniper. It looked like the Predators would contend no matter the opponent, and would start the new Radulov-era by defeating the powerful Pittsburgh Penguins. Things did not start according to plan.

The Predators came out flat, losing quite easily to the Pens 5-1. Pekka Rinne allowed 5 goals on 23 shots and the offense could not make up for lack of goaltending. Radulov did record his first goal in his first game back, but was also on the ice for 3 of the Penguins goals. However, he did backcheck and play a solid game, but his team did not do so as well. This was clearly a slight bump in the road as his second game saw Radulov much more comfortable, but it showed that the Predators do need a little bit more practice with their new star before taking on the big dogs of the National Hockey League.

Since the beginning of October, the search for the Stanley Cup favourite was on. For the past half-year, many teams have seen themselves as the perennial choice to win hockey’s top prize. The year started with the Canucks on top, and quickly switched to the Bruins until their subpar play. Following them, the Detroit Red Wings and their unprecedented home winning streak reigned supreme, and injuries saw them lose that title to the conference leaders: the Rangers and the Blues. However, last week saw the return of a dynasty. With Sidney Crosby and Kris Letang returning, there was no denying that the Pittsburgh Penguins (when healthy) had a chance to beat any club in the league. After a stretch that saw them go 3-0-1, the Pens had a matchup with the contending Predators, and made them seem like they were a bottom-feeder AHL team.

Evgeni Malkin scored 2 goals, Fleury ended up saving 29 of 30, and James Neal notched 4 assists to lead the Penguins to a decisive 5-1 victory over the Nashville Predators. In their past 5 games, Pittsburgh has outscored their opponents 25-12, allowing 4 goals when their 3rd string netminder was in goal. The team has won 13 of their last 14 games prior to Saturday, picking up 27 of a possible 28 points. The lone loss happened last night, when backup Brad Thiessen took the reigns from Fleury to allow 8 goals on 28 shots. There’s no denying that this team is currently unstoppable and Thursday further reiterated this point.

Play of the Week: T.J’s Dangle Tickles the Twine