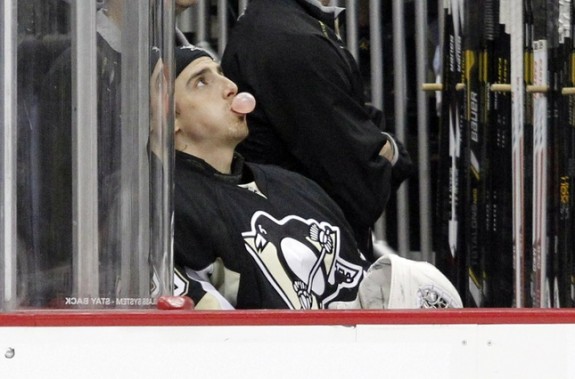 There are always those numbers and stats that enough GM’s think do not belong. Whether it is +/-, PIMS, shutouts, shifts, games started; there is one thing that remains the same. One or more of these categories literally gnaws at a fantasy owner’s very soul. Imagine if we talked about several of these mind numbing categories all at once. That is just what I am going to do with those “fantasy categories that drive owners CRAZY”.

The first category is likely to be the most obvious and that has to be +/-. It is the one that literally feels like “guilt by association” sometimes whether good or bad. And now plus/minus…….

Oh no! It really is the fantasy hockey nightmare of nightmares. Imagine losing a league because your player just happened to be leaving the ice just as an empty netter was going i for the opposition. I have seen it occur and more than once. For the congregation, short handed and even strength goals are the two times where +/- comes to play. Empty netters can but only in the two scenarios mentioned above.

All we know is that when I said “+/-“, it set off a firestorm which was our first clue at the real outrage by the fantasy masses. Now it is time to let them speak.

Words from the congregation:

Josh Smith  — Plus minus. Questionable stat to begin with, but it can really mess up a potentially offensive superstar in fantasy leagues.

Shawn Reznik — +/- aka the most arbitrary stat in hockey. Can’t stand it one bit. I believe one season Nik Lidstrom was a +40 something and then the next season he was a -2. Figure that one out for me.

This is another category that creates strife. The way officials call penalties is bad enough but the fact that those infractions can mean the difference between winning and losing can stir the pot like no other.  There is the minor penalty which is two minutes. The double minor is worth four. A major gets you five. Any misconduct will add ten minutes. This is simple enough and now the pros and cons.

Words from the congregation:

“If there is one quirky stat category in fantasy hockey that stands out as a bit controversial, it’s penalty minutes (or PIM). Some like the category because it rewards a certain amount of grit and can make defensive-minded defenseman a bit more useful in fantasy hockey. Others reasonably counter that taking a penalty often puts your team in a bad position, so why reward a mistake?”  — Pro Hockey Talk

What do we mean? This mainly covers those newer categories to the party like power play points and shorthanded points. Fantasy hockey fans are very mixed on these as they do have impacts at odd times it seems. Their explanations are fairly self explanatory however. It is time to dive into the pros and cons.

Words From The Congregation:

Nathan Kanter — Shorthanded points for sure, 2 yrs ago was tied with a guy heading into Sunday in a playoff match, i held the tiebreaker so was for sure gonna win, only to have Jussi Jokinen get a SHP for him which gave the guy a 7-6 win…

Which categories do you consider to be dishonorable that we missed? Let us know in the comments section and thanks for reading. Maybe someone will toss in the dreaded secondary assists. Stay tuned.