Midway through the season, and the Stars find themselves in a familiar situation. They are outside of the playoff picture, scrapping and clawing to earn points in the difficult Western Conference where three-point games happy very often. Like every season, there have been some ups and downs. They’ve already survived several critical injuries on defense, a few on offense and the troubles of learning a new system under a new coach with new teammates, but there is still a long way to go in the season. I take a look at three critical points I feel the Stars need to emphasize for a successful second half.

1. Stick to the Team’s Identity

The Stars find themselves right on the edge of the playoff bubble, but they know they are capable of better placement in the standings. They have been blown out by top teams like the Blackhawks and Blues, but they have also beaten strong teams like the Kings, Sharks, Bruins and Canucks. They difference is their style of play in those games. The Stars are one of the fastest teams in the league. They are very effective offensively when they use their speed to their advantage. They have already been award six penalty shots this season.

The style of play that has given the Stars the most success this season is a combination of quick transition play, a hard forecheck, and full team support on defense. If they can continue to play the game their way, they can challenge the best teams in the league. When they get away from their game plan, results similar to the 6-2 drubbing by Chicago on December 10 ensue.

With Sergei Gonchar, Aaron Rome and Trevor Daley returning from injuries and solid backchecking from Rich Peverley, Vern Fiddler and the rest of the forwards, the Stars should be better in their zone the second half of the season. With the third and fourth line establishing more chemistry and producing more regularly, the Stars can roll four lines and spread their speed throughout the lineup to attack the opposition in waves.

To say the Stars have struggled on the power play this season is a major understatement. They sit second to last in the league with the man advantage at a measly 12.5%. They’re currently even worse with the man advantage at home, where they stand at 7.7%, good for last in the league. Precious points have been lost in several games already due to an inability to convert on the power play. On December 29, the Stars had a man advantage in overtime against the visiting St. Louis Blues. They failed to score and instead gave up the game-winning goal 73 seconds later, ending their night 1-for-5 on the power play while the Blues converted both of their oppportunities.

If you told me before the season that Jamie Benn, Tyler Seguin, Ray Whitney and Sergei Gonchar would be part of the one of the worst power plays in the league, I would have laughed it off in disbelief. Take a look now and you can see a far from ideal lineup including Jordie Benn and three rookies, including recent call-up Colton Sceviour, on the power play. If a rookie with two NHL games under his belt is immediately placed on the power play and considered a welcome help for the man advantage, it’s safe to say there is a problem. 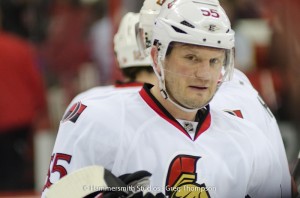 The Stars don’t shoot enough on the power play. They look for a pass too often, missing opportunities to simply put the puck on net with a player planted in front of the net. They are too tentative near the blue line and tend to send the puck around the boards more often than making direct passes or shots. The success of their entries has fluctuated as well. At times, Benn, Seguin and even Alex Goligoski fluidly enter the zone and set up behind an opposing player or two, but a lot of times the Stars run into a clogged up blue line and either turn back or lose the puck ten feet into the zone before it gets cleared down the ice. It is possible to make the playoffs with a struggling power play, but the Stars are not in a position where they can afford to lose any more points due to futility with the man advantage.

The team rises and falls with Kari Lehtonen. It’s as simple as that. He has more support this season in the form of more two-way play, a more team-oriented defensive scheme and a more potent offense. It still comes down to his play in goal. Lehtonen has 197 out of a possible 253 games over the past four seasons, but fatigue seems to seep in eventually. The Stars currently rank 24th in shots against at 32. They have been better this season at outshooting their opponents and winning faceoffs, but 32 a game is still too high.

Dan Ellis has been decent so far this season. His .897 save percentage and 3.27 GAA aren’t stellar by any means, but he is 4-4 in 11 appearances, and he gives the Stars a chance to win when he plays. If Ellis can continue his decent play or improve as the season moves along, the Stars can afford to give their top goaltender more nights off, in hope of a rested and ready Lehtonen down the stretch.