The Calgary Flames continue to struggle with mediocrity and an embarrassing loss to the last-place Columbus Blue Jackets Monday night sure made for a lot of long faces for both players and fans alike. The team continues to hover around the .500 mark but have yet to show an ability to play consistent hockey, having won consecutive games on just one occasion this year.

After failing to make the playoffs in each of head coach Brent Sutter’s first two seasons as the Flames bench boss, the club is once again flirting with being a team that is good enough to hang around the Western Conference race but has no realistic chance at taking that next step in becoming a team that can actually grab a spot in the top eight.

The word that might best describe the state of the Calgary Flames is “stale.” From the players and the way they perform on the ice, to the coaches and the style of play they’ve implemented; there just doesn’t seem to be any spark within in this hockey team. While GM Jay Feaster’s hands are tied with the type of roster he has — at least until the trade deadline — he could decide that a coaching change is needed if they can’t start finding ways to win more games on a much more consistent basis. 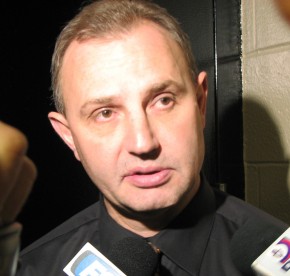 Brent Sutter was an excellent junior hockey coach and put some dominant teams together during his time with the WHL’s Red Deer Rebels and with Canada’s National Junior Program. He also enjoyed success with the New Jersey Devils in his first three seasons as a head coach in the NHL. However, it could be said that the Devils already had the system in place that perfectly suited Sutter’s coaching style. Sutter was very much a defensive-minded player during his playing career and that approach to the game has certainly carried over to coaching and the way in which he wants his teams to play. The Devils had all the pieces in place to play a sound defensive game that could propel them to victories in low scoring games. The Calgary Flames do not.

In fairness to Sutter, he didn’t pick the players and the argument can be made that he is doing a fair job with the talent he has at his disposal; but that isn’t always good enough when you are the coach of an organization who is still under the impression of being a contending team.

That mindset might be the main thing going against Sutter. The fact that the team has never really undertaken a rebuilding mode, and has continued to expect winning when maybe it shouldn’t have, certainly doesn’t work in his favour. Whereas someone like Ron Wilson was given the chance to go through a few tough years with a young team, Calgary has maintained a veteran roster that features a professionalism where making the playoffs is to be expected and not making the playoffs cannot be tolerated.

The most frusturating aspect of the Flames during Sutter’s tenure with the club has been that they have shown the ability to win on any given night, but as they painfully demonstrated last night in Columbus, they also have the ability to lose on any given night. It all comes back to that five-letter word: stale. The players are stale and the coach is stale, and unfortunately for Sutter, the players can’t really go anywhere but the coach sure can.

Brent Sutter has shown that he can be a good NHL coach and there are certainly teams out there with which he could have success. It just might not be the Calgary Flames.

2 thoughts on “Time Running Out For Brent Sutter?”