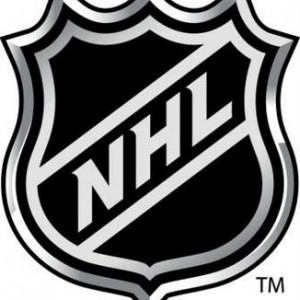 With the economy hitting season ticket sales, the continuing saga of the Phoenix Coyotes, and ongoing debate about the CBA, competitive markets, revenue opportunities, etc. I believe it is time to once again bring up the three “R’s” — realignment, rescheduling, recalculating.

Why?  More reasons than I have time to recount in this space, even though I am not known for brevity in my writing.  However, there are some overriding factors that support the concept that the changes can and should be made, and that the time is now.

First, let’s make sure that we understand what we are talking about here.  Realignment is pretty straightforward — how are the teams in the league are grouped into playing units?  Rescheduling is also obvious — how many games do the teams play, and against whom?  Recalculating refers to how we use the points system to determine standings (assuming we continue to use points).   With the terms defined, let’s dig in to why the changes need to be made, and what those changes should be.

The NHL is  the most geographically imbalanced league in professional sports, dominated by the Northeast, and with the true geographic center just outside Columbus, Ohio.  At the same time, it encompasses more of North America than any other professional league.  Notwithstanding this fact, the league attempts to organize along East/West lines, resulting in such anomalous results as having Columbus and Detroit in the Western Conference.  Both cities are located east of Atlanta, which is in the Eastern Conference.   The result is some brutish travel for Western Conference teams, while many eastern clubs can reach their games on bicycle.  Over the course of 82 games, that adds up.

Secondly, the concept of divisional play in the NHL is an idea whose time has come and gone, particularly any divisional system that grants “automatic” playoff seeds to the division winners.  We are now in the 10th year of divisional play, and the fiction that the divisional structure would promote regional rivalries is just that — a fiction.  All divisions do in the NHL is promote competitive imbalance, one way or the other.   A few teams benefit from weak members of a division, while other divisions boast a bevy of good clubs who just happen to be paired with juggernauts, and must face them 6 times per year.   Further, the automatic top three seeds that go to the division winners is far too much reward for the effort, and is not really appropriate when you have a large playoff pool such as the NHL.   Since 2000 (excluding this year),  28 teams have had equal or higher point totals to one of these automatic bids.  If divisions are kept, let the points fall where they may.  If the Pacific has nobody who qualifies — too bad.  Ask the NFL execs how they feel about the automatic berth for division winners, with the NFC West leader not sniffing .500.  Many newspapers and other outlets do not even bother running divisional standings anymore.  The focus is exclusively on the conference standings, which is what determines playoff standings.

Speaking of the conferences, let’s turn to competitive imbalance for a moment.  Since the NHL resumed play after the 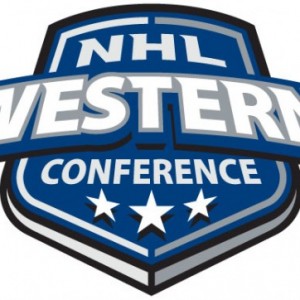 lockout, the Western Conference has a collective 591-373-118 record vs. the Eastern Conference.  That, folks, is domination.  Lest you think that this is due largely to huge victory margins by Detroit, San Jose and Vancouver, it is more stunning to note that every team in the West has a winning record against the East.  The closest to parity is St. Louis, with a 35-30-8 record.  The three expansion teams in the West — Minnesota, Nashville and Columbus, are a collective 117-73-27 against the East.  That is some serious competitive disparity, and with divisional and conference scheduling the way it is, shows that 90 points in the West is an entirely different animal than 90 points in the East.

In my view, the best solution is to adopt a conference structure analagous to the league structure in Major League Baseball, where each conference has representative members from each geographical region, and accompany this with a schedule that largely ignores conferences and divisions (if any), and enables everybody to play everybody else, to the maximum extent possible.  Here are two ways that could be done:

As I noted above, the NHL is a league of stars and teams, not individual rivalries.  Sure, there are teams that don’t like 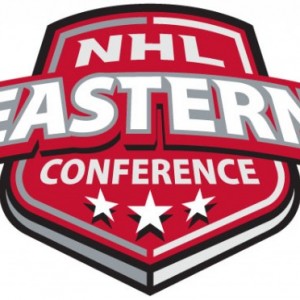 each other, and teams that we love to see face off, but some of the revenue and attendance problems could be alleviated by ensuring that everybody gets seen everywhere.  The six games against divisional opponents is more numbing than anything, and the four against the conference foes is only slightly better.  There is an intensity to NHL hockey that is lacking in other sports, and focusing that intensity on 2 or 3 opportunities against a given opponent is a way to heighten interest and likely make the games themselves more competitive.   In this way, it doesn’t matter which teams are “hot” — they will get seen everywhere, and the prospect of teams getting penalized for being in a “stacked” division or benefiting from a weak one are greatly ameliorated.

Here’s one take at a conference lineup.  The conference names are optional — I’m not getting into that debate here!    Further, the teams could be mixed and matched, so long as the regions are split between the conferences — i.e. Anaheim and Los Angeles need to be in separate conferences, as do the Rangers and Islanders, etc.

Turning to the calculation side of the equation, there are two principal changes that need to be made. (Again, my opinion — but that’s what this is all about).  First, as already discussed, eliminate the divisions and the free ride into the playoffs for division winners.   Go strictly by the points — with a largely balanced schedule, you’ll end up with the eight teams in each conference who have done the best against largely the same competition over the course of 82 games.  That’s what the playoffs should be.

Secondly, and more controversially, I would adopt the 3-2-1 system of scoring games.  3 points for a regulation win, 2 points for an OT/SO win, 1 point for an OT/SO loss.   While I could maybe be talked into allowing a 3/0 split for OT and reserving the 2/1 for SO, that would not be my preference.   My beef with the existing system is that it is too subject to manipulation, and that you should never, ever have a system where the inherent value of a game changes based upon the conduct of the participants.  A game is a game — every one of the 82 contests a team plays should weigh precisely equally in determining the final standings.  Yet that’s not the way it is today.  When the two teams stop being aggressive with five minutes left in the game, just so they can get the “guaranteed” one point, they have changed what was a 2 point game into a 3 point game.  That is just fundamentally wrong.

Other leagues are using the 3-2-1 system, and it’s time for the NHL to jump on board.  I’m not prepared to simply do away with the “extra” point, for a couple of reasons.  First, hockey is far more susceptible to the freakish bounce or “lucky” play than most other sports.  We have decided, in the interests of revenue and excitement, to play to a decision, though we do that with a modified version of the game — first five minutes of 4-on-4, then a shootout.  A regulation game is 60 minutes of hockey, with 5 guys on the ice, power plays excepted.  If you can score more goals than the other guys in that time, terrific.  Take your points, and the other guy goes away with nothing.  However, if you play to a draw, then proceed to a skill contest, I don’t think that you should take away the 1 point the other side would have had for a tie.  The quality of their effort is better than a team that loses in regulation.  Give them that reward.  By the same token, the achievement in winning 4-on-4 or in a SO is less than a team that can prevail in regulation time, and the points earned should reflect that fact.   The system will provide true incentive for avoiding overtime and shootouts, and insure that games retain the same value throughout the season, for every team.

So, why make these changes now?  Because the NHL has the opportunity to capitalize on some things it has done right, and perhaps make up for some things it has done wrong.  The on-ice product since the lockout is a much improved one — faster, more skilled, more exciting to watch.  Young, dynamic stars are emerging across the country, rekindling interest in the game.  Crosby, Ovechkin, Stamkos, Kane, Nash, Kopitar — the list goes on.  With HDTV becoming standard, the game is becoming watchable on TV, further increasing exposure and interest.

Of particular importance right now is the fact that both the NFL and the NBA are hurtling headlong into labor disputes that could well end in protracted work stoppages.  TV numbers are up for the NHL as is, and with the prospect of bleakness and empty programming slots come next October, ESPN is supposedly expressing interest once again in carrying the NHL.  This is a huge opportunity for Bettman and the league to atone for the Versus fiasco, and create some positive momentum for the league.  Make these changes to increase the exposure of all of the teams, and make the entire system fairer and more competitive, and the game could be poised for a new period of prosperity — which is one goal that the NHL, the owners and the players can all agree upon.

NHL hockey is the greatest game around.  These few tweaks would make it even better, in my view.  Let the debate begin!

3 thoughts on “Time to Realign, Reschedule, Recalculate . . .Are you listening, Gary?”