TORONTO — Andreas Johnsson scored twice as part of Toronto’s four-goal outburst in a seven-minute stretch to open the second period as the Maple Leafs dismantled the Edmonton Oilers 6-2 on Wednesday.

Mitch Marner added a goal and two assists, while John Tavares, William Nylander and Patrick Marleau had two-point nights to provide the rest of the offence for Toronto (39-20-4).

Frederik Andersen made 34 saves for the Leafs, who now turn their attention to Thursday when they visit the Islanders in Tavares’s return to New York.

Leon Draisaitl and Ryan Nugent-Hopkins replied for Edmonton (26-30-7). Mikko Koskinen allowed four goals on 16 shots before getting the hook in favour of Anthony Stolarz, who finished with 18 saves. Darnell Nurse had two assists. 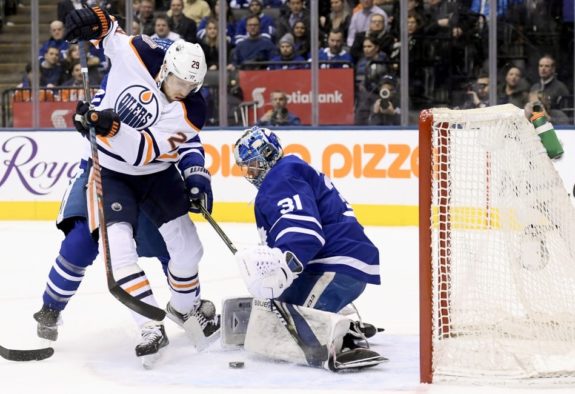 Oilers superstar Connor McDavid returned to the lineup after serving his two-game suspension for a hit to the head on Islanders defenceman Nick Leddy last week. Wednesday marked another homecoming for McDavid, who grew up in a suburb just north of Toronto and cheered for the Leafs as a kid.

The 22-year-old had actually sat out three of Edmonton’s last four games — one with illness and two because of suspension — with his team managing five of a possible six points. The Oilers came in with six out of a possible eight points in their last four outings, but were also just 3-8-4 over the last 15.

Edmonton head coach Ken Hitchcock said after the morning skate McDavid was “pissed off” about the suspension.

The entire roster probably had a similar feeling in the wake of Wednesday’s second period.

Tied 1-1 after the first, the floodgates opened for Toronto at 1:09 when Marner redirected a perfect feed from Zach Hyman under Koskinen’s blocker for his 22nd goal of the season, and just his second in the last 14 games.

The Leafs then went up 3-1 just 1:17 later when Johnsson finished off a pretty passing play with Kasperi Kapanen and Auston Matthews for his 18th to match his jersey number.

Nylander got in on the action on the power play at 4:50 when he ripped his fifth shortside upstairs on Koskinen, who gave way to Stolarz.

Johnsson rounded out the seven-minute deluge on another man advantage when he took a feed from Tavares in the slot and beat Stolarz through the pads for his second of the night. 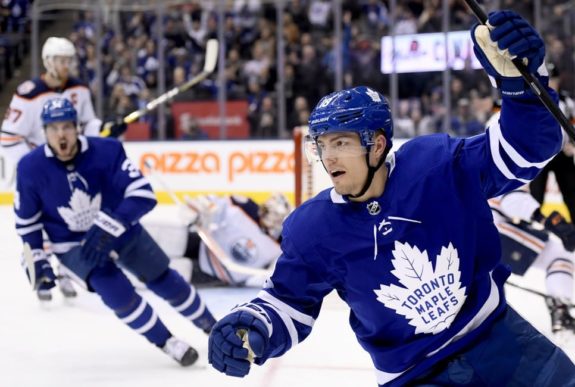 Andersen held the fort in the first for Toronto, but made his best save on Oscar Klefbom later in the period when he robbed the defenceman on a great chance at the side of the net.

The Leafs got a brief scare earlier in the second when Kapanen crashed awkwardly into the boards and went to the locker room after one shift, but the winger returned towards the end of the period.

It wasn’t all good news for the Leafs, however, as defenceman Travis Dermott went straight to the locker room midway through the final period doubled over in pain favouring his left arm/shoulder after taking a hit along the boards.

Things actually started out well for the Oilers as Draisaitl opened the scoring on the power play at 11:06 of the first when he stepped around Jake Muzzin and then toe-dragged fellow Leafs blue-liner Ron Hainsey before depositing his 39th goal, and 15th in the last 15 games, past Andersen.

Toronto, which trailed 13-2 on the shot clock at one point after also getting badly outplayed in the opening 20 minutes of Monday’s 5-3 victory over Buffalo, got back even just after an Edmonton penalty expired.

Stopped on a breakaway earlier in the period, Marleau collected the rebound of Muzzin’s point shot and slid home his 12th of campaign, and second in the last 13 games.

The 39-year-old also moved into a tie with Ron Francis for 28th on the NHL’s all-time goals list with 549.

Notes: Tavares spent nine seasons with the Islanders before signing with Toronto as a free agent on July 1. … The Leafs announced defenceman Jake Gardiner is week-to-week with a back injury, while centre Nazem Kadri missed a fourth straight game with a concussion. Kadri skated before Monday’s practice. … The Oilers visit Ottawa on Thursday.