The Toronto Maple Leafs have signed veteran forward Patrick Marleau to a three-year contract worth $18.75 million dollars, the team announced Sunday on the second day of the free agency period. The deal carries a cap hit of $6.25 million and will run until Marleau is 40 years old.

The #Leafs announced today the signing of F Patrick Marleau to a 3-year contract. The annual average value of the contract is $6.25 million.

One of the biggest free agent names on the board to start free agency, Marleau and his camp chose not to sign a contract on the first day of the signing period. Still, at 37 years old, Marleau was generating a considerable amount of interest from teams around the league. After all, the veteran was coming off of his 19th NHL season – a year in which he scored an impressive 27 goals and 46 points with the San Jose Sharks in the 82 games in the regular season before scoring three goals and four points in six postseason contests.

Originally drafted by the Sharks with the second-overall pick in the 1997 NHL Entry Draft, Marleau has been one of the best players of his generation and arguably of all time, scoring 508 goals and 1,082 points in 1,493 games. Being part of the 500-goal club is no easy feat, but Marleau managed to join it last season and now has the chance to join the exclusive 600-goal club by the time his contract ends. Consistency is probably the best word to describe Marleau as he’s scored at least 20 goals in 14 seasons (as well as 17 in 48 games in the lockout-shortened 2012-12 season), at least 30 goals in six seasons, and he scored career-highs in goals with 44 and points in 83 in 82 games during the 2009-10 season.

End of an Era

After spending his entire career with one team, Marleau is set to leave the Sharks and join a young Maple Leafs team ready to take the next step. Despite all the regular season success that the Sharks and Marleau have had together, there has always been a concern about the fact that the team has been unable to win the big game. Without a Stanley Cup Championship to his credit and with only one career Stanley Cup Final appearance coming two years ago, change is finally coming. While Joe Thornton may be remaining with the Sharks after signing a one-year deal to stay with the team to try and take care of unfinished business, Marleau is starting the next chapter of his career alongside some of the brightest young stars the NHL has to offer. 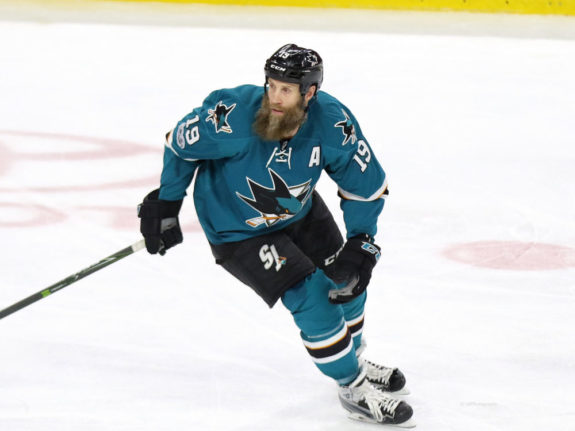 It looks as though the Sharks will be bringing back Joe Thornton on a one-year deal. (Amy Irvin / The Hockey Writers)

The Maple Leafs have been in a rut for over a decade. Missing the postseason in 10 of the 11 seasons prior to the 2016-17 campaigns (and being eliminated in the first round of the 2013 postseason after holding a 4-1 lead in Game 7), the Maple Leafs are finally starting to see the light at the end of the tunnel. With the drafting of Auston Matthews first overall coupled with other impressive rookie seasons from the likes of William Nylander and Mitch Marner, among others, the Maple Leafs were one of hockey’s most exciting teams last season.

A playoff berth was more than the team could have hoped for last season, but still, they found themselves playing against the President’s Trophy-winning Washington Capitals in the first round and giving them a run for their money. Though the team lost the series in six games, it was clearly a step forward for the young squad lead by head coach Mike Babcock. A veteran leader like Marleau joining the fold should help the Maple Leafs as they look to continue their progression with a player who not only adds experience to their locker room but who still has a lot left to give in the NHL.