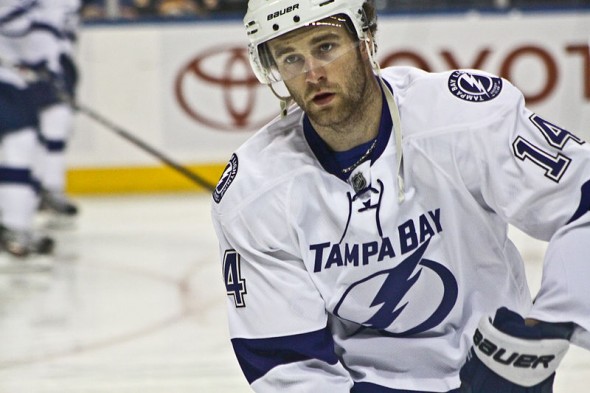 Sometimes the players that benefit the most from the trade deadlines are the ones that stay on the roster. While the Tampa Bay Lightning might not have been as big of a seller as they could have been, the moves they did make provided a chance for some players to make their mark on the team – none more so than rookie Brett Connolly.

The 6’2”, 190lb winger surprised many by making the Lightning out of training camp. At 19 years old and having only one full season of play following hip surgery it was assumed that he would be returned to his junior team for another year of seasoning. Instead, with the last cut before opening night, the Lightning chose to send Dana Tyrell to Norfolk and keep Connolly on the roster.

For the first two months he didn’t disappoint. Occasionally finding himself on one of the top lines with Vincent Lecavalier and Marty St. Louis he chipped in 4 goals and 4 assists during the first two months of the season. Most of his success was the result of his positioning in front of the net, playing the same type of game that Ryan Malone plays, in that he was looking to score on deflections and rebounds.

However, as the months wore on his play suffered. Perhaps due to his early success he felt he didn’t need to work as hard. As a result his playing time and production on the ice decreased. For the fourteen games he played in December and January he picked up zero points and only cracked double digits in ice time twice. His play was so ineffective General Manager Steve Yzerman had no qualms in loaning the former number one draft pick to the Canadian national team for the World Junior Championships.

Early in his tenure with the elite team of 20-and-under stars, most of whom had not played in the NHL, his work ethic was questioned. Head coach Don Hay told the National Post that the coaching staff informed the winger that he had to “put his work ethic in front of his skill level” and that his poor body language was having a negative effect on the squad.

Connolly took the criticism to heart, perhaps too much so as he plastered teammate Quinton Howden into the boards during practice with such force that Howden was sidelined with a possible concussion. Serving as an assistant captain during the tournament Connolly played well racking up five goals en route to Canada’s bronze medal finish.

He returned to the Lightning in early January and with the roster saddled with injuries it was hoped that he could inject some life into the moribund offense. It wasn’t to be. He continued to struggle offensively, and more important to Coach Boucher, he struggled with his defensive zone coverage. Now, along with dwindling ice time, Connolly would find himself a healthy scratch in several games. When he did play it was no longer on the top lines, rather he would scratch 6 or 7 shifts together on the 4th line.

As the trade deadline loomed there was speculation that Connolly could end up back in juniors with the Tri-City Americans. The deadline came and went and the Prince George’s native found himself still with the Lightning. The consensus among the front office was that while he would undoubtedly have success with Tri-City it wouldn’t help him develop his game defensively. Mr. Yzerman also found himself in a position where he needed warm bodies after dealing forwards Dominic Moore and Steve Downie while losing Tyrell and Lecavalier to injuries.

Since the deadline Connolly has found himself on the second line with Ryan Malone and Tom Pyatt and has been playing some of his best hockey of the season. While it hasn’t necessarily translated to points yet (he only has 3 assists since the move) their line has been one of the more effective at spending time in the offensive zone.

Connolly has also shown a little more diversity to his game. Along with his size he’s been relying a bit more on his skating ability. On at least two occasions (one against Ottawa and one against Washington) he has taken defenders one-on-one and beat them with his speed. Malone’s presence as the big body in front of the net has allowed Connolly to roam around the offensive zone a little more and create chances – a skill his size and speed are a better fit for.

With the Lightning’s playoff hopes dimming a bit after 3 consecutive losses, the remaining month of play will serve as a tryout for young players such as Connolly. He has the opportunity to show the organization that not only does he have the talent, but he also has the desire to be an elite player in the NHL.