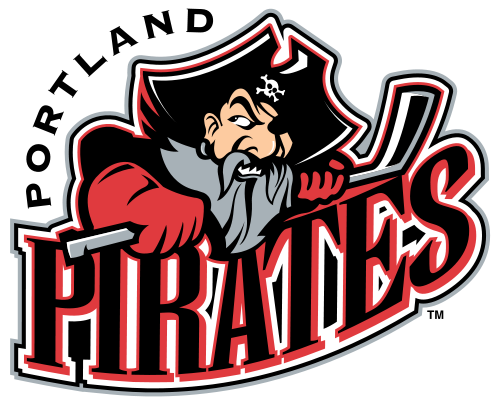 For fans of the Portland Pirates, November was quite a tumultuous roller coaster ride. And not one of those kiddie caterpillar coasters, but one that makes your eyes unwillingly water and your stomach relocate itself to your throat, before it jerks you every which way. From extending an away game winning streak (then ending it), to an embarrassing shut-out to finish the month, it’s been a rough ride. Fans seem to have forgotten the thrill and are now just emotionally disheveled.

Now that the season is a quarter of the way in, it’s time to take a peek back at the high(and low)lights of this month, including a quick career overview of starting goaltender Mark Visentin, and a look ahead at what the next month will hold for the team.

The Ups and Downs

The Pirates began the eleven-game month with a 4-2 loss at home against the St. Johns IceCaps, leaving their record 2-5-0-1 as of November 1st. It wasn’t much of a surprise then that the Pirates sat the bottom of the Eastern Conference standings, having lost more than twice as many games as they’d won in regulation.

After dominating the Worcester Sharks 5-1 at home on November 8th, the Pirates then took to the road and beat the Sharks again, this time 4-3, and extended their road game streak the team had began in late October to three games. Left-winger Chris Brown registered the game-winning goal, bringing the Pirates’ record to 4-5-0-1. The Pirates won again at home on the 15th against the Manchester Monarchs, defeating the best team in the Eastern Conference 4-1.

The first half of the month was fairly consistent, the team either losing or winning back-to-back games. The second half, however, was not so pretty, beginning with a 2-1 shoot-out loss against Springfield on the 16th. On the 17th, the Pirates extended their road game streak to four games after defeating the Providence Bruins 4-3 in overtime. For the first time all season, the Pirates had actually won more games than they’d lost, their record 6-5-0-1, but they quickly lost their momentum when the team lost 3-2 in overtime at Norfolk on the 23rd, the Admirals crushing their best streak of the season. The Pirates hadn’t traveled to Norfolk since 2011, and were quickly able to redeem themselves against the Admirals by defeating them 4-3 in a shoot-out the following night.

The final three games of the month were all lost by the Pirates with a deficit of two or more goals each game – 4-1 at Hartford, 3-1 against Worcester, and a final 3-0 shut-out at Springfield to finish the month. The Pirates’ current record is 7-8-1-2, back to their unfortunate position of having lost more games than they’ve won so far this season, and sit at 14th out of 15th place in the Eastern Conference.

While it’s easy to generally blame a loss on a lack of defense or offensive leadership (or both), it’s important to take a look at Pirates’ starting goalie, Mark Visentin, and see exactly what he’s contributed to the Pirates since joining the team in 2012.

The 21-year-old is a large presence in net, standing 6’2″ and weighing 200 pounds. Professionally, Visentin played for the Niagara IceDogs for four seasons, beginning in 2008. Visentin played 166 games for the OHL team, and averaged a save percentage of .906 overall. Before beginning his career with the Portland Pirates during the 2012-2013 season, Visentin contributed to Team Ontario’s gold medal win in the 2009 World Under-17 Hockey Challenge with Hockey Canada. He then made the Canadian team for the 2011 World Junior Championships, and though Olivier Roy was the starting goalie, Visentin filled in from the quarterfinals on, but ultimately let Russia sneak 5 goals into the net, resulting in Russia’s 5-3 victory over Canada in the finals. Visentin made another appearance in the WJHCs in 2012, where Canada won the bronze medal against Finland (check out a save from the game in the Youtube clip below).

Visentin was drafted 27th overall in 2010 by the Phoenix Coyotes, and in his first season with the Pirates, he played 30 games, and finished the season with a total of 2.98 GAA, 773 saves, and a save percentage of .903. So far, he’s played 15 out of 18 games this season, including nine out of the eleven-game month of November. The Pirates have won six games with him in net, and have lost seven in regulation, plus a shoot-out loss and an overtime loss.

It seems the young goaltender is still developing at the AHL level, which is entirely understandable. But are more losses than wins acceptable at this point in the season? Last season, in the 30 games Visentin played, he was able to pull off 15 regulation wins and 12 regulation losses, so there is definitely time to make up ground with the more than 30 games he is projected to start throughout the remainder of the season. Last year’s starting goalie, Chad Johnson, is now Tuukka Rask’s backup in the Boston Bruins organization, so Visentin has some skates to fill.

What about a general prediction? Visentin will struggle this season. He hasn’t been the starting goalie for an American Hockey League team yet, but the potential to be a top AHL goaltender is there with some more development.

December looks like November, at least at this point, for the Pirates. The team is unpredictable at best, and December promises four tough games against the Providence Bruins, who are currently at sixth place in the Eastern Conference, and loaded with hard-hitting Boston Bruins prospects. Some of the Pirates’ top offensive players have been recalled by Phoenix, thus continuing the inconsistency in lines and on-ice structure.

December also looks like the month where the Pirates will have to seriously consider looking for a place to call home that isn’t Lewiston or Portland. It was announced Monday December 2nd that the Cumberland County Civic Center, former home of the Portland Pirates, will house the Maine Moose Trax, a team of the United States Lacrosse League, as tenants.

Saco doesn’t seem like such an outlandish future home for the Pirates after all, as it may be their only option.

Regardless, another eleven-game month is upon the team, and they’ll kick it off on December 6th with a trip to Worcester to battle the Sharks, whose record is currently 8-8-1-0.