Following an inauspicious, technical difficulty-filled arrival into the NHL, the Vegas Golden Knights hit another road block last month when it was announced that their trademark application was denied by the U.S. Patent and Trademark Office (USPTO).

On Dec. 7, the USPTO formally denied the attempt by team owner, Bill Foley, to officially trademark the new franchise’s full team name. The main reason of which was that the name could be confused with similarly-named collegiate athletic programs. As one example, the USPTO attorney deemed that people could “easily” mistake the Vegas Golden Knights with a collegiate program. In some cases, both pro and collegiate teams play in the same arena.

So, what’s next for Foley’s unregistered Golden Knights?

Path to an Accepted Trademark 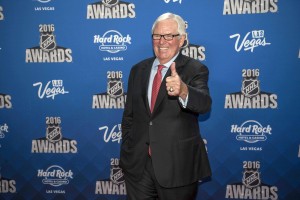 With the help of a trademark attorney source, we can examine what needs to be done in order for the franchise to officially register “Vegas Golden Knights” as the trademark of the team name.

First, Foley and his team of lawyers have six months from the rejection date to respond with evidence resolving the issues cited by the USPTO in the rejection notice. This could include examples of how the Vegas Golden Knights logo and usage differentiates from the other athletic organizations cited or reasons the Vegas team branding is unique in its own way.

Following a response by Foley’s team, the USPTO will usually respond within 1 to 2 months. If the trademark is then accepted, Vegas is all set. But, if the trademark is rejected again, then there are two courses of action Foley’s team can take. First, they can respond within six months with even more evidence proving the name’s uniqueness. The second option is to file a formal appeal with the USPTO.

Choosing the latter option provides the Golden Knights’ legal team with an administrative court setting to prove their case in front of a three-judge panel. This may be more beneficial than continuing to go back-and-forth with the same USPTO attorney who has already rejected their case. However, if an appeal is filed with the USPTO, the typical resolution of such cases usually takes one-to-two years. Even that USPTO decision can be appealed in various courts, further extending the process.

With possibilities of an initial Vegas response, further responses, and/or an appeal, it’s conceivable that the Golden Knights’ trademark issue may continue well into the summer and even into next season. It’s completely possible that the Vegas team does not have a registered trademark once opening night comes around.

Can the Golden Knights officially enter the NHL, select players in the expansion draft, and begin the 2017-18 season without a registered trademark? Yes, but they would not have the same legal benefits as the other NHL franchises who are registered.

Without going into too much detail on what is a very dense subject, the Golden Knights can operate without a USPTO registered trademark. They technically acquired some enforceable rights—protection from future, outside usage—under federal and state law when the franchise announced their name on Nov. 22. Having a registered trademark simply makes their rights easier to enforce.

In conclusion, Vegas can operate without a registered trademark, but they would be wise to complete the registration process of their name to ensure they have the most legal protection possible.