Last postseason, the St. Louis Blues coaching staff witnessed one of its players break out just when it was needed most.

Vladimir Tarasenko, who missed the final 15 contests of the 2013-14 season with a hand injury, scored four goals in the six-game series loss to the Chicago Blackhawks. He and T.J. Oshie were the only two players on the roster to accumulate multiple goals in the series.

It went deeper than just tallying goals. It was the way that the Russian winger did it. In Game 1, his first game in over a month, Tarasenko registered three shots on goal in the first period, including an equalizing goal at 15:52 of the period. The 2010 first-round pick finished the game with seven shots on goal, tying teammate Chris Porter for the lead on both teams.

He added his second career postseason goal in Game 2 (another big tying goal) and had his first multi-goal contest of the NHL playoffs during Game 4 in Chicago.

“He’s a great player every game and a young, emerging player,” head coach Ken Hitchcock said after Game 4. “Hopefully he stays with it and helps us a lot. He’s really shooting the puck well, he’s putting pucks on net, he’s not looking to make the second or third play; everything’s coming at the net. He’s got such a great shot, he can pick corners like he did (in Game 4).”

Tarasenko is no stranger to catching fire in the postseason. With SKA St. Petersburg during the 2012 KHL playoffs, Tarasenko accumulated 10 goals and 16 points in 15 games played. Although his team did not make it to the Gagarin Cup Finals (the last playoff round), he finished third in the postseason in goals and fourth in points.

Tarasenko has made it easy to believe that his progression toward stardom has not reached its peak.

Before Tarasenko was drafted 16th overall by the Blues in 2010, there was belief he could be taken in the top 10 of the draft. The only fear? His willingness to come over to play the North American style of hockey.

The accolades were promising — 15 points in seven games for Russia at the 2009 Under-18 World Championship, played two seasons in the KHL before that year’s draft — but the infamous Russian factor weighed in for teams considering Tarasenko’s services. Alas, the Blues’ trusted then-head scout Jarmo Kekalainen’s word and traded the team’s 2009 first-round pick, defenseman David Rundblad, to draft Tarasenko with the Ottawa Senators’ original pick.

Tarasenko went on to play the next two seasons in the KHL, amassing 32 goals and 66 points with teams Sibir Novosibirsk and SKA St. Petersburg. He arrived in St. Louis in the summer of 2012, but the impending lockout struck and the Blues’ property returned to Russia to begin the KHL season. It wasn’t just the Blues management team that worried about Tarasenko returning after the lockout was lifted.

“I was really excited when I saw that he decided to come over,” Kekalainen said in June 2012, then the general manager of Jokerit of the Finnish Elite League. “The draft is not successful until the guy comes over and plays in the NHL. People can say all the want after the draft, ‘Oh, that was a great pick.’ It’s not a great pick until he plays in the NHL and plays a lot.”

Tarasenko did, in fact, make the jump to the NHL. The debut against Detroit saw two goals and the dream began for both Tarasenko and Blues nation. He finished the season with eight goals and 19 points in 38 games, missing 10 games with a concussion. He also appeared in just one postseason game after registering just three assists in the final 15 regular season games.

Tarasenko’s second season was much more consistent than his first, scoring 21 goals and 43 points in 64 games. If history is any indication, his stock will continue to rise.

Multiple NHL players, including teammate David Backes, saw a boost in production in their third season. The following chart shows current NHL players who benefited from a prosperous third season. 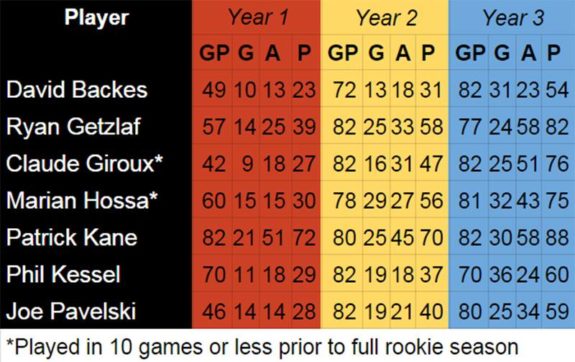 Of course, players have been known to go the other way in progression (see Alexandre Daigle), but Tarasenko has not shown any signs of slowing down. The mobile forward saw his numbers trend upward during his final KHL years (47 points in 54 games in 2011-12 and the aforementioned 32 points in 31 games in 2012-13). There’s no reason to believe he won’t do the same at the NHL level.

Factor in that the Russian will see his former KHL linemate with Novosibirsk, Jori Lehtera, on the same roster, a career year seems even more likely.

The duo played on the same line during the 2011-12 season, each posting near-point-per game seasons (Tarasenko with 38 points in 39 games and Lehtera with 26 points in 25 contests). The two have picked up where they left off,  skating together for the majority of the informal skates at the Blues’ practice facility.

“We played together in Russia for a couple years, (and) it was a really good time,” Tarasenko told the St. Louis Post-Dispatch. “He’s a really skilled player. He can score, he can pass. I liked to play with him.”

The belief is that coach Hitchcock will start training camp on Sept. 18 with Lehtera and Tarasenko on the same unit. This is potentially two-thirds of a top line that will take the ice opening night on Oct. 9.

A lot of potential has built up for No. 91 over the years, and there is plenty of reason to believe that it will boil over in 2014-15.