Here at The Hockey Writers, we complied predictions from 25 of our writers for the 2017 Stanley Cup Quarterfinals. We predicted both the winning teams, plus the series length. Our first-round predictions were broken down into two parts: the Western Conference and Eastern Conference.

For the Western Conference series, the majority of us picked the Edmonton Oilers (21-4) and the Anaheim Ducks (19-6) to move on to the second round. Of the 21 of us that predicted the Oilers would defeat the San Jose Sharks, only six of us correctly predicted they would win in a six-game series (Rob Soria, Jon Bateman, Louis Pannone, Ryan Pike, Marcy Di Michele, and Scott Kline).

The Anaheim Ducks swept the Calgary Flames, extending the Flames’ losing streak in Anaheim. Nineteen of us believed that the Ducks would win this series. However, only one of us (Trevor Beggs) predicted that this series would end in four games, in favor of the Ducks.

Unfortunately, the majority of us incorrectly predicted the Central Division winners in round one. For the Nashville Predators-Chicago Blackhawks series, our lopsided picks for the Blackhawks (20-5) missed the mark. Only five of us thought the Predators would be victorious in their first-round matchup (Josh Boulton, Trevor Connors, Matt Pryor, Ryan Szporer, and myself). None of us anticipated the Predators sweeping the Blackhawks, though, as we all predicted this series ending in six or seven games.

As for the Minnesota Wild-St. Louis Blues matchup, only six of us predicted the Blues winning (Jeff Hawkins, Andrew Forbes, Brandon Share-Cohen, Hannah Bonnie, Marcy Di Michele, and Scott Kline). Nineteen of us believed that the Wild would defeat the Blues, with 12 of us thinking the series would extend to six games. Of the six of us that predicted the Blues, our picks were split between the series ending in six or seven games. 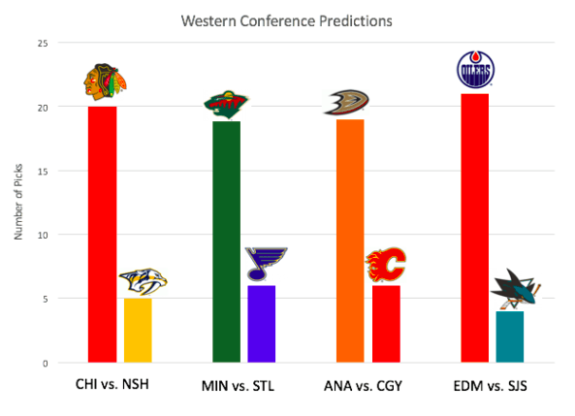 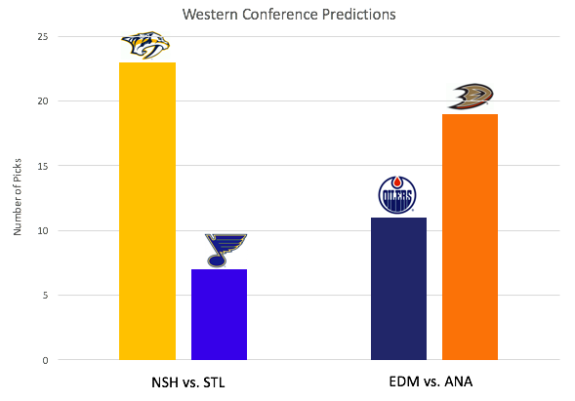 After sweeping the Chicago Blackhawks, the Predators will face off against the Blues. The Blues concluded the first round of the playoffs with a five-game series win against the Minnesota Wild. The Blues finished third in the Central Division with a record of 46-29-7, accumulating 99 points. The Predators finished fourth in the Central Division, slotting them as a wild card for the playoffs. Ultimately, the Predators finished as the second wild-card seed. They finished the season with a record of 41-29-12, which equated to 94 points.

The Blues’ leading scorer, Vladimir Tarasenko, ended the regular season with 75 points, which is higher than any member of the Predators. There is a 20-point difference between the Blues’ first two leading scorers, as Jaden Schwartz trails with 55 points. Their defensemen have chipped into the offense this season, with their captain Alex Pietrangelo leading the defense in scoring with 48 points (he is fourth overall on the team in scoring for the season). At the trade deadline, the Blues lost their second-highest scoring defenseman–Kevin Shattenkirk, who accumulated 42 points with the Blues this season.

Through their first five playoff games, Schwartz is their leading scorer with five points. Alex Steen has scored four points, while Vladimir Sobotka, Tarasenko, and Patrik Berglund have three points so far.

The leading scorer on the Predators during the regular season was Viktor Arvidsson, who had a breakout season with 61 points through 80 games. Although that does not compare with Tarasenko’s season, the Predators had three forwards that earned a high number of points. Tied with Arvidsson for points was Ryan Johansen (who played the full 82-game season) and third in points was Filip Forsberg, who finished the season with 58 points.

Similar to the Blues, the Predators have offensively-capable defensemen. Roman Josi scored the fourth-most points for Nashville this season (49). Fellow defensemen of P.K. Subban and Ryan Ellis also impressed this season with 40 points (in 66 games) and 38 points (in 71 games), respectively.

All but four members of the Predators have accumulated points through their first four playoffs games. Even their goaltender, Pekka Rinne, has two assists so far. Johansen leads the Predators with six points in the playoffs. Forsberg follows with five points, then Arvidsson and Ellis with four each. Additionally, Josi and Colton Sissons both have three points.

The goaltending for the Blues (Jake Allen) and Predators (Pekka Rinne) will be imperative in this series. Both goaltenders were game-changers in the first round and their teams will likely rely on them again in this series. During his five starts, Allen went 4-1 with a .956 save percentage and 1.47 goals-against average. He had one shutout in this series. Allen’s goals saved above average was 5.76 against the Wild.

Pekka Rinne, on the other hand, had a save percentage of .976 and a 0.70 goals against average in his four starts, where he went 4-0. He shutout the Blackhawks twice in the quarterfinals. Rinne’s goals saved above average in the first series was 6.21.

Injuries moving into the semifinals must be considered as well. As of April 20, Craig Smith sustained an undisclosed injury, and his availability for Game 1 of the semifinals has not been determined. The Predators may also be without Colin Wilson, who suffered a lower-body injury on April 6, to begin this series. Other than Robby Fabbri, who has been out since Feb. 5 with a torn ACL, the Blues do not have any major injuries moving forward into this series.

After analyzing this matchup, we predict by a count of 23-7 that the Predators will win this series. According to our predictions, the outcome most likely (that generated 13 votes) is a Predators victory in six games. Although the Predators did not have the majority of support in the quarterfinals, their sweep of the Blackhawks was convincing enough to inspire 23 of us that they will defeat the Blues in the semifinals. 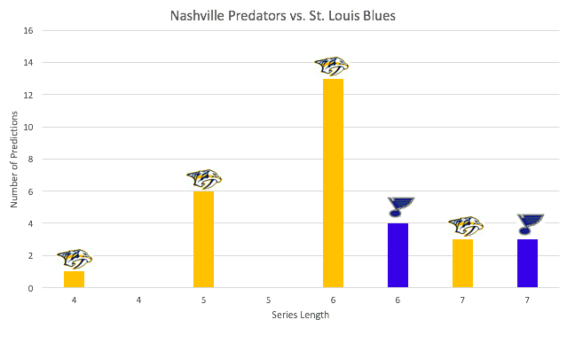 In their first playoff appearance since the 2006 Stanley Cup Final, the Oilers were victorious in the first round against the San Jose Sharks. While the Oilers defeated the Sharks in six games, the Ducks swept the Flames. Now, the Oilers will begin their next series in Anaheim against the Ducks.

The Ducks completed the regular season in first place in the Pacific Division. With a record of 46-23-13, the Ducks finished the season with 105 points. The Oilers finished behind the Ducks in second place. Their 103-point season consisted of a record of 47-26-9.

The Oilers played the Ducks five times in the 2016-17 regular season. In those games, the Oilers went 3-2-0. Two of the Oilers’ three wins in their series matchup were at home. Both of their home wins against the Ducks were in overtime. Three of their matchups this season were closely matched and each team had one decisive win against the other (Edmonton had a 4-0 win while Anaheim had a 4-1 win).

In their four-game playoff series against the Flames, the Ducks’ leading scorers were Getzlaf, Rakell, and rookie defenseman Shea Theordore with five points each. Nate Thompson and Kevin Bieska followed with four points each.

The Oilers’ regular-season leading goal scorer was their captain, Connor McDavid, who reached an impressive 100 points. Leon Draisaitl had the second-highest number points this season at 77. The team also had offensive contributions from their defensemen, including Oscar Klefbom (38 points) and Andrej Sekera (35 points).

McDavid also led the team in scoring through the first round of the playoffs, with four points. Klefbom, Draisaitl, and Mark Letestu trailed with three points each. The Oilers have received contributions from Zack Kassian, David Desharnais, and Milan Lucic, each of whom has added two points in the first series as well.

Oilers have the edge in 5v5 offense and penalty takes.
Ana has the clear edge in 5v5 defense and faceoffs. pic.twitter.com/kd0PCkYeG7

Gibson started all four games against the Flames in the first round, but was relieved by Bernier in the second half of Game 3. In his four appearances, he went 3-0 with a save percentage of .926, a 2.60 goals-against average, and a 5.03 goals saved above average at five on five.

Talbot too was pulled in one game of his first-round series (in Game 4), and replaced by his backup, Laurent Brossoit. In the six-game series against the Sharks, Talbot’s save percentage was .927 and his goals-against average was 2.03. At five on five in the first round of the playoffs, Talbot’s goals saved above average was 2.35.

The Ducks have suffered a number of injuries this season, but Fowler (who has been out with a knee injury since April 5) is expected back for Game 1 against the Oilers. Sami Vatanen (who sustained an upper-body injury on April 15) is set to return for this series as well. Clayton Stoner, who has been on long-term injured reserve with an abdominal injury since Nov. 17, is uncertain for the upcoming series. The Oilers do not have any serious injuries moving forward into the next round.

With all of that considered, the majority of us predict the Ducks winning this series. The most agreed-upon outcome for this series is a Ducks win in six games, with 13 predictions. Of the 12 of us that predict the Oilers to win this series, we are split between the series going six (five votes) and seven (six votes) games. None of the 19 votes in favor of the Ducks in this series believe this will end in another sweep for the Ducks. 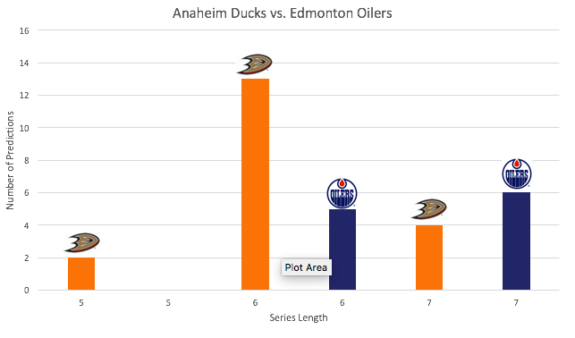 Therefore, at The Hockey Writers our consensus is that the Predators and Ducks will be moving onto the Western Conference Finas. Eastern Conference previews are coming soon!