This is Part 1 of 2 of  The Hockey Writers’ NHL Playoff predictions for the first round of the 2017 Stanley Cup Playoffs. The Western Conference predictions are here.

The first round of the 2017 Stanley Cup Playoffs begins on Wednesday. There are a number of factors that go into predicting each playoff series, including regular season matchups, home-ice advantage, playing styles, and injuries. Even with those considerations, the playoff results are often unpredictable. 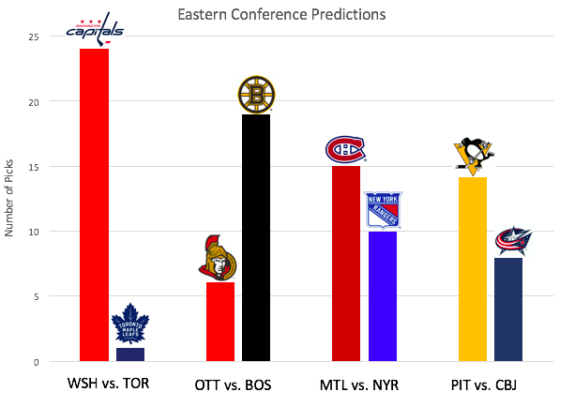 The Toronto Maple Leafs, who finished in the second wild card spot in the east with 95 points (40-27-15), will face the Presidents’ Trophy-winning Washington Capitals. The Capitals finished the season with 118 points (55-19-8).

Losing their final regular season game may come back to haunt the Maple Leafs, who dropped to the second wild card seed with that loss. Had they won, they would have edged out the Boston Bruins for the third seed in the Atlantic Division, matching up against the Ottawa Senators.

Unfortunately for the Leafs, the Capitals have been outstanding at home this season–setting a franchise record for single-season home wins. The Capitals’ roster is loaded with talent, from Alex Ovechkin, Nick Backstrom, T.J. Oshie, and Evgeny Kuznetsov on offense to Kevin Shattenkirk, Matt Niskanen, and Dmitry Orlov on defense. And of course, the Capitals have 2016 Vezina Trophy winner Braden Holtby in net.

The Leafs, on the other hand, have a plethora of young talent in rookies Auston Matthews, Mitch Marner, and William Nylander. On defense though, the Leafs may be without Nikita Zaitsev. Goaltender Frederik Andersen has returned to practice after being injured in Toronto on Saturday and is expected to start Game 1. Without Anderson, the Leafs’ disadvantage would only grow.

As offensively talented as both teams are, the Capitals have a distinct advantage because of their defense and goaltending. The Capitals also have more experience than the youthful Leafs, so they will likely be better able to handle the pressures of the Stanley Cup Playoffs.

Our predictions reflect the Capitals’ advantage over the Leafs. The final count from us was 24 votes in favor of the Washington Capitals in this series and only one predicting a Leafs victory. The majority of us (13) felt the series will end in five games. 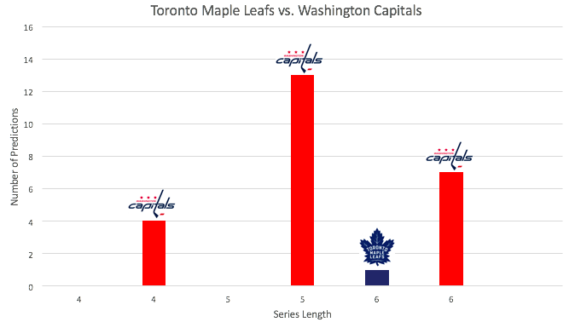 The reigning Stanley Cup Champions will begin the playoffs against the Columbus Blue Jackets. These two Metropolitan Division foes ended up as the second and third seeds in their division. The Penguins accumulated 111 points (50-21-11), while the Blue Jackets finished with 108 points (50-24-8).

The Penguins have a number of key injuries, including defensemen Kris Letang and forwards Carl Hagelin and Chris Kunitz. However, even with mounting injuries, the Penguins have been resilient thanks to their depth.

The Blue Jackets have unfortunately finished the season in an offensive slump. However, against the Penguins in the playoffs, they can bounce back. Their young players have thrived this year, including Alexander Wennberg, Brandon Saad, Zach Werenski, and Seth Jones.

This matchup will be tough for both teams. The key matchup of this series will be Sidney Crosby against Brandon Dubinsky. The goaltending of Sergei Bobrovsky will also be crucial for the Blue Jackets against Matt Murray and the Penguins.

While this appears to be a more even matchup, our cumulative votes favor the Penguins. Seventeen of us believe the Penguins will move past the Blue Jackets, while only 8 of us see the Blue Jackets winning. Much of this comes down to the Penguins’ experience. They managed to win a Stanley Cup with a lesser known group surrounding their core. Through injuries and suspensions, the Penguins persevered.

The Blue Jackets, on the other hand, have significantly less playoff experience. In 2014, the Blue Jackets lost to the Penguins in the first round in six games. Their 2016-17 season series was tied 2-2 as well. Our predictions reflect that this series will likely go the distance, to at least six or seven games. 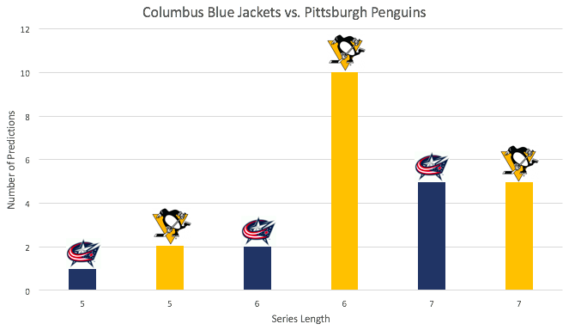 The New York Rangers will begin their series in Montreal against the Canadiens. The Rangers, who finished with 102 points (48-28-6), ended the season in the first wild card seed. The Montreal Canadiens led the Atlantic Division with 103 points (47-26-9).

Their last playoff matchup was in the 2014 Eastern Conference Finals when the Rangers defeated the Canadiens in six games. Both rosters have evolved significantly since that series, so the matchup is much different now.

The last time the teams met, Price only played a part of Game 1 before being injured. This season, Price’s numbers were superior to Lundqvist’s (Price’s 5v5 expected goals saved above average per 60 of 0.227 exceeded Lundqvist’s -0.098, for example). However, Lundqvist faces a higher volume of high-danger scoring chances than Price because of the lackluster defense in front of him.

All things considered, this is the closest matchup across the league according to our predictions, with a slight majority of us predicting the Canadiens will be victorious over the Rangers. Much of that can come down to the coaching and matchups set by each team. As it stands, it looks as if the Rangers will match the Canadiens’ gritty style, rather than forcing them to match their speed and skill game. And the consensus may be that Lundqvist cannot carry this team as he has in recent seasons. Our final count for this matchup is 15 in

Our final count for this matchup is 15 in favor of Montreal and 10 for New York. There is no overwhelming favorite for this series, nor for a particular series length. 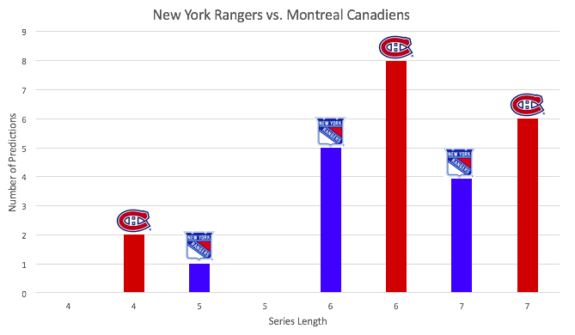 In the Atlantic Division, the Ottawa Senators and Boston Bruins claimed the second and third seeds. The Senators finished ahead of the Bruins with 98 points (44-28-10). The Bruins, on the other hand, had 95 points (44-31-7).

Both teams are dealing with a number of injuries. The Senators are missing both Marc Methot and Cody Ceci, while the Bruins are without Brandon Carlo and Torey Krug. The Bruins have signed their draft pick from Boston University, Charlie McAvoy, to help on defense. 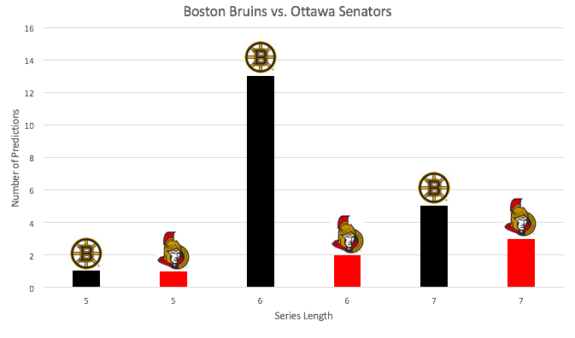 Based on our Eastern Conference predictions, the semi-finals of the Stanley Cup Finals in the East will be as follow: Capitals vs. Penguins and Canadiens vs. Bruins.

*All data courtesy of Corsica.hockey.