This is Part 2 of 2 of The Hockey Writers’ NHL Playoffs predictions for the first round of the 2017 Stanley Cup Playoffs. The Eastern Conference prognostications can be read here. 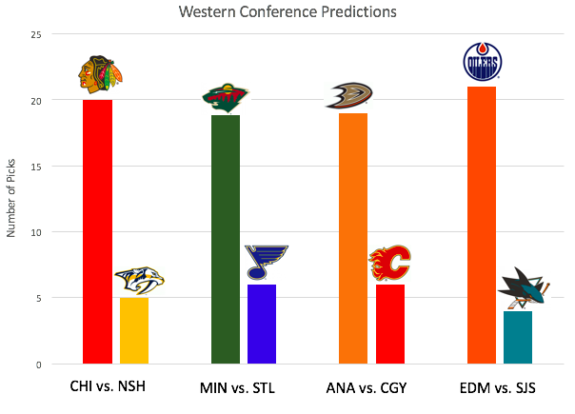 The Chicago Blackhawks completed the season as the best team in the Western Conference with 109 points (50-23-9). As such, they will meet the second wild card seed in the first round, the Nashville Predators. Although they are in a wild card position, the Predators will still play through their division. The Predators earned 94 points this season (41-29-12), finishing fourth in the Central Division.

The Predators and Blackhawks last met in the 2015 Stanley Cup Quarterfinals, which the Blackhawks won in six games before moving on to winning the Stanley Cup. Both teams have kept much of their cores intact since that matchup, but have made a number of key additions.

The Blackhawks have added several young players to keep their team strong, including Artemi Panarin, Ryan Hartman, Nick Schmaltz and Richard Panik. The most significant change the Predators made was trading captain Shea Weber to the Montreal Canadiens in exchange for defenseman P.K. Subban. They also added Ryan Johansen and forward Viktor Arvidsson had a breakout season. 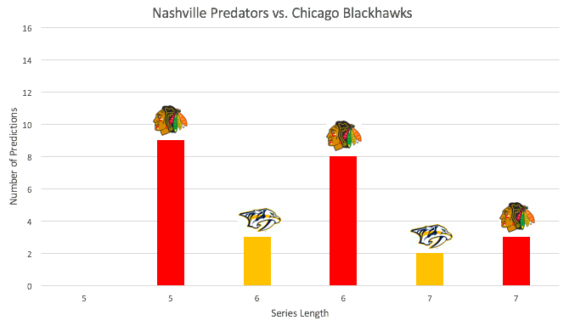 For the second time in three seasons, the St. Louis Blues and Minnesota Wild will meet in the playoffs. The Wild finished ahead of the Blues in the Central Division with 106 points (49-25-8). The Blues were behind their competitor with 99 points (46-29-7).

These teams last matched up in the 2015 Stanley Cup Quarterfinals. The Wild took the series in six games. This season, the Wild and Blues met five times, with the Blues going 3-2-0 against the Wild.

Former Wild head coach Mike Yeo took over in the same capacity with the St. Louis Blues since Ken Hitchcock’s dismissal. This is Bruce Boudreau’s first season as the head coach of the Minnesota Wild.

For the first time since the 2012 Stanley Cup Playoffs, the Blues escaped a first round elimination last season, making it to the Western Conference Final before being eliminated by the San Jose Sharks in six games. The Wild have appeared in the last four Stanley Cup playoffs, but only made it past the quarterfinals twice and were eliminated in the semifinals both times.

Neither the Wild nor the Blues have had particularly impressive goaltending this season, but the Wild’s Devan Dubnyk’s expected goals saved above average of -0.2365 was superior to that of Jake Allen of the Blues (-0.07552).

With all of that considered, 19 of us predicted the Wild will win this series. Only 6 project that the Blues will move on to the semi-finals. Almost half of the total predictions believe the Wild will take this series in six games. 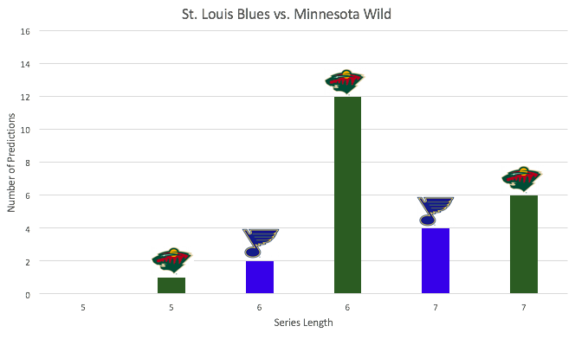 The Calgary Flames will play the Anaheim Ducks to begin their playoff journey this season. The Ducks led the Pacific Division with 99 points (46-23-13), while the Flames ended in the first wild card seed with 94 points (45-33-4).

In their final regular season matchup on April 4, Flames captain Mark Giordano injured Ducks’ defenseman Cam Fowler, who is expected to be out six weeks. The teams brawled in their last matchup, and those harsh feeling will likely carry over into the postseason.

The Ducks have relied on John Gibson in net, with Jonathan Bernier excelling in his absence. Unlike last season, Gibson will be able to compete in the playoffs without the threat of losing his starting position to Frederik Andersen, who was dealt to the Toronto Maple Leafs last summer. The Flames’ goaltender Brian Elliot has improved in the second half of the season, emerging as a key player for the team. 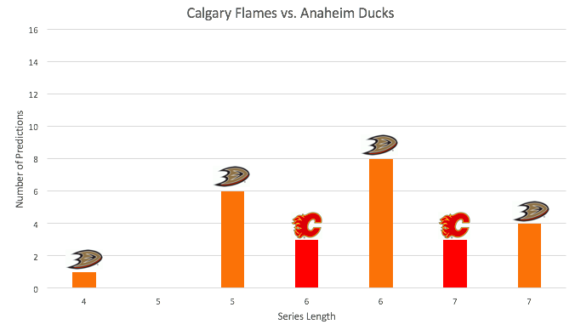 The Edmonton Oilers will return to the Stanley Cup playoffs for the first time since the 2006 Stanley Cup Final. In the first round, they will compete against the San Jose Sharks. The Oilers accumulated 103 points (47-26-9), earning them the second seed in the Pacific Division, while the San Jose Sharks finished in third place in the division with 99 points (46-29-7).

The Oilers and Sharks faced off five times this season, with the Oilers going 3-1-1 in that span. Many of the Oilers’ core has not appeared in the Stanley Cup playoffs before, while the Sharks are experienced in the postseason, as they reached the Stanley Cup Final last season.

Led by Connor McDavid on offense, who accumulated 100 points this season, and Cam Talbot in net, the Oilers have surpassed expectations. One of the biggest concerns for the Oilers should be their fatigue of their goaltender Talbot, since he played 73 games this season. In those 73 games, Talbot has been vital to the Oilers. His expected goals saved above average per 60 is above average at 0.3215. In comparison, Martin Jones of the Sharks, is considered average at -0.0004035.

The Sharks may be missing some of their top forwards in Joe Thornton and Logan Couture to start the playoffs. Without their top two centers, the Sharks may be at a major disadvantage. The Oilers exceeded the Sharks in a number of offensive categories this season (5v5 shots for per 60, scoring chances for per 60, expected goals for per 60), making the potential loss of Couture and Thornton even more detrimental. 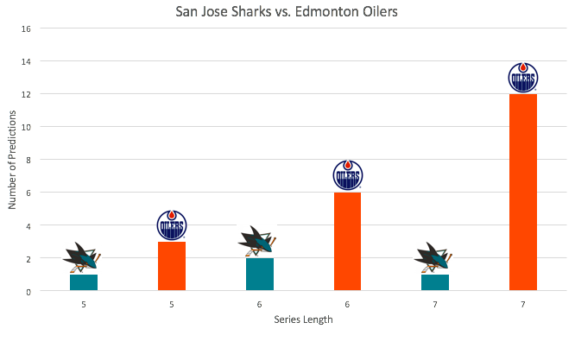 Based on our Western Conference predictions, the semi-finals of the Stanley Cup Finals in the West will be as follow: Blackhawks vs. Wild and Ducks vs. Oilers.

*All data courtesy of Corsica.hockey.