What Is Hockey Craic?

In order to explain what Hockey Craic and this column will be about, I need to tell you what the Irish term Craic means. Here is the definition you’ll get if you Google Craic:

“Craic” (/kræk/ KRAK) or “crack” is a term for news, gossip, fun, entertainment, and enjoyable conversation, particularly prominent in Ireland. It is often used with the definite article–the craic–as in the expression “What’s the craic?” (meaning “How are you?” or “What’s happening?”).

In terms of hockey, that’s exactly what I intend to give you in this column. My take on the latest news, gossip or hot topics around the NHL with an insightful yet entertaining spin that will hopefully spark some great hockey conversation. With my strong passion for music, you can also expect plenty of music connections to the content and topics. So without further ado, let’s get into some good Hockey Craic!

Farewell to the Joe

The Stanley Cup playoffs begin Wednesday and ironically as they arrived, we said goodbye to a place that hosted the best tournament in sports for the last 25 seasons. You can bet there was plenty of Hockey Craic at Joe Louis Arena in Detroit last weekend as this past Sunday the Red Wings and their fans bid adieu to the penultimate “Barn” in the NHL—with the Saddledome now the last—and the place they called home since 1979. (Note: Madison Square Garden doesn’t count because it had a complete renovation and makeover in 2013).

For those who don’t know me, I grew up just outside of Boston. I was born into Boston Bruins season tickets that my grandfather purchased in 1967 and would hold on to them until the Boston Garden’s “Last Hurrah” in September 1995, which I had the privilege of attending.

Watching the “Farewell to the Joe” this past Sunday, that amazing memory came flowing back again. That and the fact I was always a Red Wings fan, thanks to Steve Yzerman, definitely helped me relate to what all those in attendance for this amazing and everlasting memory were experiencing. Colleague, Detroit native and longtime puck scribe Nicholas J. Cotsonika did a fantastic job of painting the picture on NHL.com.

“I’ve never had goosebumps this many times during a game in my career,” – Red Wings captain Henrik Zetterberg told the assembled media after a 4-1 Red Wings win and his 1,000th game.

Speaking of goosebumps, how about Bob Probert’s wife spreading his ashes in the Joe Louis Arena penalty box where her husband spent plenty of time?

If you haven’t seen the Farewell to the Joe, the Red Wings’ Twitter feed has some great clips and also posted the full video.

Also, as I sat down to watch the last game and subsequent ceremony this past Sunday, I reached out to my old friend and colleague Rob Simpson, who grew up a diehard Red Wings fan in Michigan and asked him to email me a Joe Louis memory. This is what ‘Simmer’ who hosts “Stellick and Simmer” on SiriusXM NHL Network Radio replied with:

“It’s tough because I’ve been there for a lot of incredible events, concerts (Yes, U2, (and) Queen, back in the day), and a bunch of Stanley Cup Final games. Game 2 of the 1998 Final against Washington stands out, where the crowd literally picked the team up on its shoulders and carried it through three 2-goal comebacks, and then to win it in overtime with Draper. Can’t describe the energy.

“But nothing compares with January 12, 1980! I was with my oldest brother and my dad when Gordie and his sons played for the Hartford Whalers against the Red Wings. This was two weeks before the famous ovation at the All-Star Game which gets a lot of deserved recognition, but the night Hartford played Detroit and the crowd continuously chanted “Gordie! Gordie! Gordie!” I had a huge lump in my throat all night and was trying to be the tough teenager and not tear up in front of dad and bro. Tough. Gordie was, and is, my hero.”

Farewell to the Joe. Thanks for the memories!
[irp]

Another Michigan hockey legend also said goodbye, as after standing behind the University of Michigan hockey bench for 33 years, Red Berenson retired from his alma mater at the young age of 77. Check out these stats from this piece by Nick Baumgardner of Mlive.com:

Berenson is one of four college coaches with 800 wins. His 22-year NCAA Tournament streak at Michigan is still a record. He won two national titles. He coached 73 NHL players, two Hobey Baker winners and made 11 Frozen Fours.

Yours truly had the pleasure of interviewing Berenson by phone when I was writing for the now-defunct On Campus column of NHL.com back in 2008. I’ll never forget how he opened the conversation.

“So you’re from Boston, eh?” And then he proceeded to tell an array of tales from playing in the old Boston Garden, including how the Bruins would turn the heat up as high it would go in the playoffs to sweat out and “dehydrate” Berenson and his Blues teammates in the 1970 Stanley Cup Final that Boston won on the famous Bobby Orr goal.

“That’s why Bobby could fly and we could hardly skate,” the legendary coach told me.

Shawn Thornton  never skated or dropped the gloves in the old Garden but he did his predecessors like Stan Jonathan, Terry O’Reilly and Jay Miller proud in the new TD Garden as a fan favorite for six seasons in the Black and Gold, three in Anaheim prior to that and then the last three in Florida with the Panthers.

I had the pleasure of covering Thornton, who I learned in his first season there was named after the character Shawn Thornton in the classic John Wayne film The Quiet Man. Thornton became part of a renewed rivalry between Boston and Montreal during his tenure with the Bruins, and with the Stanley Cup playoffs upon us as he says goodbye to the NHL, I thought of this beauty he gave me when I asked him what it’s like to be on the opposing bench during the anthem at the Bell Centre for a playoff game.

“You’re either going to piss your pants or go out and kill someone!” Thornton exclaimed.

He’s right. There truly is no better place other than the United Center for pre-game atmosphere.

There also won’t be many others like Thornton. He was tough but with a heart of gold, always giving back to the community, especially in his adopted and now permanent home in Boston, and still does so with The Shawn Thornton Foundation. Best of luck to the not-so ‘Quiet Man’ of hockey, and thanks for always humoring us hockey mucks! 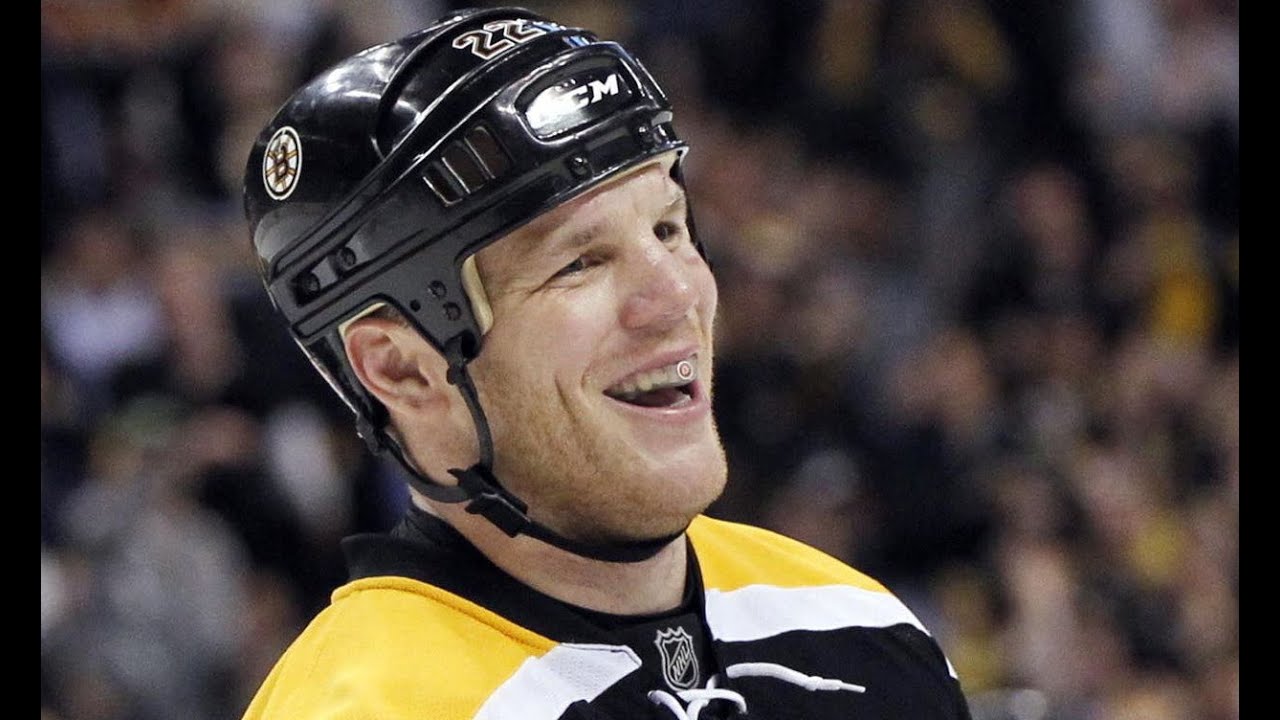 Unfortunately, there was another emotional goodbye in the NHL, but not by choice. Three-time Stanley Cup champion and Hurricanes forward Bryan Bickell was forced to retire due to multiple sclerosis. After battling the disease off ice for months, Bickell returned to the ice recently to see if his body would be able to handle playing again, but after a game last Thursday he told the media it was time to hang them up.

But Bickell wasn’t going to go out on a sour note. On Sunday, he scored a shootout goal in his final NHL game to help his team to a 4-3 shootout win over the Flyers. It was one of those moments that reminds us all why we love this great game!