The Toronto Maple Leafs have made the playoffs.

It feels weird, doesn’t it? The last time the Leafs made the playoffs was the 2012-13 season, but it feels like it’s been longer. Maybe it’s because of how that series against the Boston Bruins ended or that it was only one post-season appearance before missing the next three seasons.

When thinking about the Leafs in the playoffs it’s often the Mats Sundin era that comes to mind first. Under Pat Quinn, the Leafs made the playoffs for six straight years from the 1998-99 season to the 2003-04 season. Those glory years were 13 years ago. Now it finally feels like the Leafs are in a new era and there is hope for this franchise again.

So with the Leafs back in the playoffs who will their first round opponent be? Maybe the Ottawa Senators with a renewed “Battle of Ontario” or maybe a chance to get revenge on the Bruins for last time? Oh no, it’s the worst opponent the Leafs could face in the first round.

The Defeatist Era Is Over

Think about when you saw the news that the Leafs would play the Presidents’ Trophy winning Capitals? What was your first reaction?

It was probably that the Leafs would be swept in four games and that they had zero chance of even winning one game. With the Capitals being the top team in the NHL and the Leafs being the bottom Wildcard team; it’s rational to think that would be the case. All signs point to it.

Now think back to the beginning of the season. Did anyone think the Leafs would make the playoffs this year? Did anyone think that Matthews would hit 40 goals this season and break long-held team records? There were doubts that Mitch Marner would even be able to play at the NHL level due to his size. There were doubts about all the rookies. There were even doubts about Frederik Andersen being a true number one goalie.

This is a team that has defied expectations at every level. Any of those early season doubts seem laughable now. So why should fans start doubting this team now?

Brian Boyle: "We're here for a reason. We should feel good about ourselves."

Are the odds against the Leafs? Absolutely. But beating the odds is what this team has done all season.

So it’s time for the defeatist attitude to end. It will be difficult to change considering the Leafs had only made the playoffs once in 11 years since the 2003-04 season. But this is a new team. So it’s okay to have hope and to cheer, against all odds, for the Leafs to win.

The Presidents’ Trophy winning Washington Capitals. The scary monster of the NHL. It’s time to shine a light on the Capitals and show that they’re not as scary as they seem.

The Presidents’ Trophy is awarded to the team with the most points in the NHL regular season. It’s a very prestigious honor that shows the excellence that said team has achieved in a season as the best NHL team. The problem is that this award doesn’t automatically translate to playoff success.

Since Alexander Ovechkin’s rookie season in 2005-06, the Capitals have made the playoffs eight times. In that time they’ve been one of the most dominant teams in the NHL. They’ve won the Presidents’ Trophy three times: 2009-10, 2015-16 and this season. The problem for the Capitals is that it hasn’t translated to playoff success. 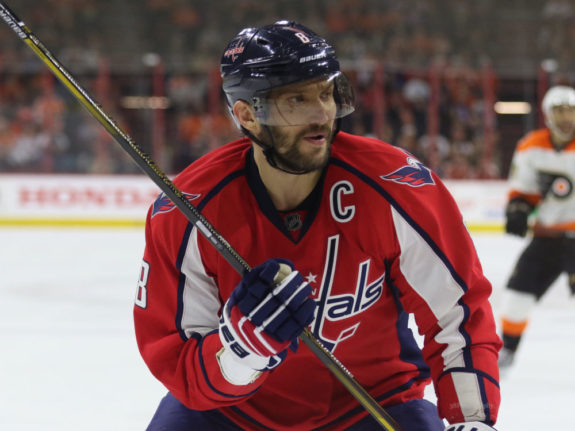 In the eight playoff appearances since Ovechkin’s rookie season the Capitals have never gotten past the second round. They’ve also lost in the first round three of those times, which includes the 2009-10 Presidents’ Trophy season.

Since the 2005-06 season, only two teams have won both the Presidents’ Trophy and the Stanley Cup in the same season. The Detroit Red Wings in 2007-08 and the Chicago Blackhawks in 2012-13. The Vancouver Canucks won the award in 2010-11, but lost in the finals that year.

The Leafs have done surprisingly well against the Capitals this year. The two teams have faced each other three times this season and have come away looking pretty even.

Jake Gardiner on facing #Capitals: "You have to beat the best at some point. Might as well do it in the first round."

The Capitals still look like the better team, but that doesn’t mean the Leafs are just going to roll over and let the Capitals win. The Leafs have outperformed expectations and so they are in a playoff series that nobody expected them to be in. And by playing against the top team in the NHL means there is no pressure.

Nobody expected them to be in the playoffs and nobody would be shocked if the Leafs lost to the Capitals. The Capitals are the opposite. They are heading into this series with the most pressure of any NHL team. It used to be the San Jose Sharks, but now the Capitals are the team that always chokes in the playoffs. They need to win this series and make it to at least the third round to quell their own demons.

So with the Leafs up against, seemingly, insurmountable odds do you cheer for them to prove doubters wrong again and defy expectations or fall back into old defeatist attitudes?