Since reaching the Stanley Cup Finals in 2006, it is common knowledge that the Edmonton Oilers have struggled mightily.

This has been due largely in part to playing in the Western Conference, a Conference whose teams have become increasingly competitive and successful, especially in recent years during the Oilers’ rebuild.

This begs the hypothetical question: what if the Oilers played in the Eastern Conference?

Based on the current scheduling structure put in place at the beginning of the 2013-14 season, each Western Conference team will play 32 games per season against the Eastern Conference, while those in the East play 28 against the West.

During these inter-conference games over the past few seasons, the Edmonton Oilers have played some of their most successful hockey (to their standards). 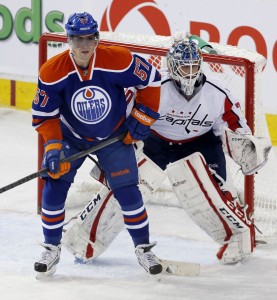 If a member of the Eastern Conference, the Oilers would play 54 games within the East and 28 against the West. In using the Oilers’ record versus the East over the past five seasons, the Oilers have an overall record of 43-42-13, a record which would award them 99 of a possible 196 points. This equates to a Points Percentage of .505%, meaning that the Oilers have secured over half of the points available against the East.

Further to this hypothetical situation, the Oilers would have to play 28 games against the Western Conference. Based on the records above, the Oilers have a painful 68-125-27 record within the West over the past five seasons, a record which would has them winning 163 of a possible 440 points. This equates to a disastrous Points Percentage of .370%.

In putting the results of a hypothetical Oilers season in the Eastern Conference together, Edmonton would finish an 82 game season with approximately 76 points. Although this is not a spectacular points total, the Oilers have and continue to improve as a team despite their poor record, and would in all likelihood, have produced a much greater points total in past history in the Eastern Conference.

Keep in mind this is all strictly hypothetical. However, it goes without saying that it would be interesting to see how the Oilers would fair in a full season playing the majority of their games against the NHL’s Eastern Conference, especially so given their 6-2-1 record against the East so far this season.