The Vancouver Canuck’s newest netminder, and current starter, Ryan Miller has entered the 2014-2015 season without much negativity coming out of the Vancouver media. He has played in 75% of the Canucks games so far and is sitting with a record of 12-3-0 good for third of all NHL goaltenders.

When you start to look at his underlying play these numbers are not so positive. One of the best goalie advanced statistics we have are simply a goaltender’s Save-Percentage (Sv%) and his Even-Strength (ES) Sv%. These numbers do not bode well for Ryan Miller who has a .900 Sv%, good for 49th in the NHL while posting a .904 at ES, good for 51st in the league. To put these numbers into context, as of November 22nd, the NHL league average Sv% is .913.

Using some of the advanced statistics for goaltenders we can see look into Miller some more. His Goals Saved Above Average have not been very good with a -5.09 placing him at 61st in the league. Additionally Miller has 9 Quality-Starts so far, good for a 60% rate which is a reasonable QS rate for goalies.

Plainly these numbers are not good and have been costing the team. If the Canucks had a league average goalie the Canucks would have five less goals against; by using the 3-1-1 rule where every three goals is an additional point in the standing the Canucks would be sitting an extra 1.66 points higher. This does not seem like much of a difference but over an entire season that Sv% gap can make all the difference between making the playoffs or not. If the Canucks still had Luongo his Sv% would have given the Canucks an additional 3 points in the standing and they would be sitting ahead of the Anaheim Ducks for first in the league. 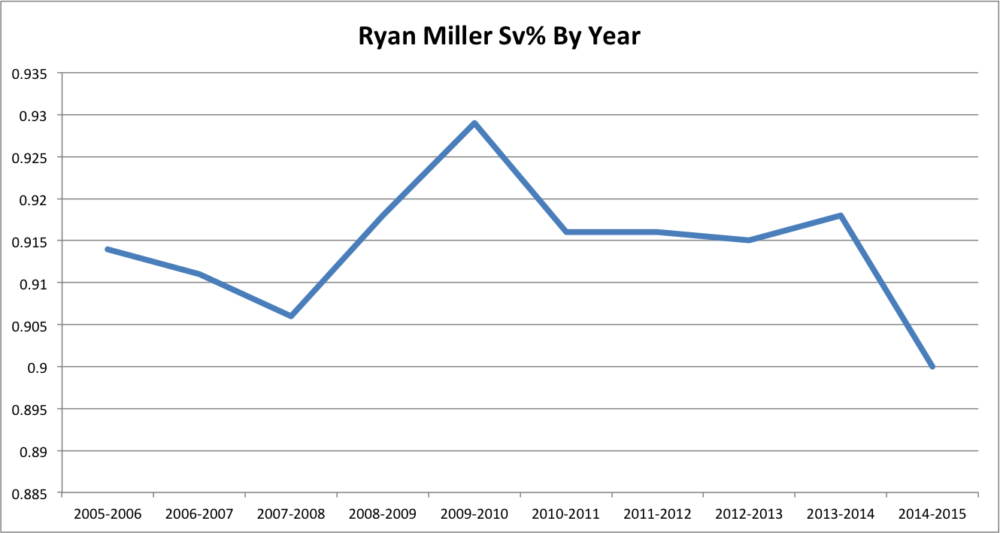 There is some good news though, this type of performance does not look sustainable for Miller and he should regress upwards. We can look at his career numbers and we can see the Miller has been an above-average goaltender for most of his career. Goaltenders consistently decline in Sv% as they age but the changes are not huge. We expect that Miller would have a small drop in his sv% from a .918 but not as drastically as he has played. 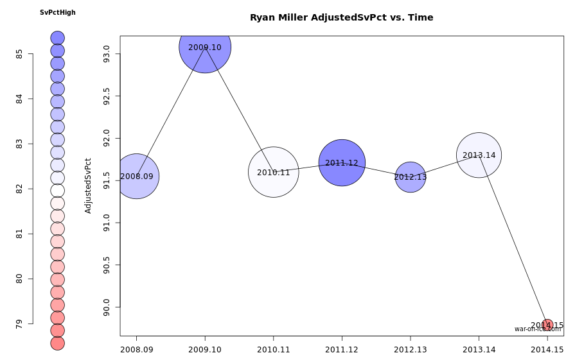 It seems that most of his bad play has resulted from a few blow ups in his 15 starts which is seemingly worse than his actual play. Miller has played bad in his limited sample size and it has costed the Canucks actual points in the standings. This is okay though because we a can be reasonable confident that Miller will regress to the mean and see his performance move to a much more normal level.  Over a whole season he is not likely to be the problem with the Canucks.