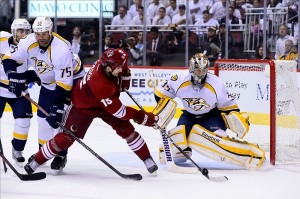 Headed in to the post season, the Nashville Predators were considered a serious threat, but for the second straight year they failed to get past the second round. What went wrong? How did a team that looked so good coming in come apart in the post season? How can the problems be fixed?

The first glaring issue was overall team focus. After a game two loss to the Phoenix Coyotes in round two, Alexander Radulov and Andrei Kostitsyn broke the team’s curfew rules and were sat out of games three and four. Both are players that the team needed focused on winning. Just how big of an issue focus was and whether or not it spread further than Radulov and Kostitsyn is hard to tell, but it seems to have factored in to the Preds demise.

Another problem was the lack of consistent production from big name players like Fisher, Erat, and Weber, who combined to add just 11 points in 10 games. The Problem was not as evident in the first round victory over the Detroit Red Wings because of the strong supporting cast of players like Bourque and Klein, who stepped up when the team needed it most. In round two, the lack of production from the big names once again became an issue as the team was shutout twice and held to two or less in the final three games of the series. When they were fighting for their playoff lives, the big guns came up empty. In fact, the lone game Nashville won in the series was a 2-0 victory at home in game 3 in which Mike Fisher scored. Fisher failed to light the lamp in every other game in the series and it they were defeated.

The next problem was the power play.  Coming into the post season Nashville had the leagues best power play at 21.6% efficiencey.  In the post season they converted just 5 times on 41 opportunities for a disappointing 12.2%.  Power play opportunities could have made the difference for Nashville, but instead was part of the team’s failure.
Phoenix deserves a lot of credit.  The stellar play of goaltender Mike Smith and strong Defense really frustrated Nashville at times.  However, this does not make it any easier for fans in Music City to accept.  One interesting statistic is the team’s record with and without Hal Gill.  Gill was brought in to solidify the back end as he has done for several teams in the post season before.  That being said, Nashville was 4-1 without Gill and 1-4 with him.  Why? Maybe because of his size and lack of speed.  Ryan Ellis and Jack Hillen split time taking Gill’s place while he was injured in round one.  Ellis(21) and Hillen(26) are both under six feet tall and under 200 pounds, while Gill towers at 6-7 and 240 pounds.  With Gill in and Hillen/Ellis out, Nashville gained defensive presence, but lost quickness and youth on the back end, which may have been a factor that led Preds being on the wrong end of the hand shake line.
This off-season, Gm of the year nominee David Poile has decisions to make.  With Weber becoming a free agent, it should be a very interesting off-season for Nashville.  Will Weber return? What direction will management take in making the team better? Will next season be the year the team can finally break through? Only time will tell and one thing is certain, it will be interesting to watch how it all plays out
http://www.nhl.com/ice/series.htm?season=20112012&series=l