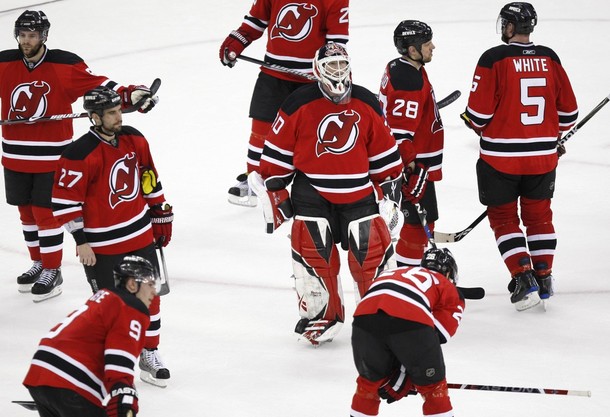 After taking the past couple of weeks off from writing a article, I took time to sort of let the shock wear away and to reflect on the 2008-2009 season of the New Jersey Devils.

While reflecting on the season, I recalled many great memories from the season as well as the bad moments. It’s unfortunate that such a great season will not be remembered for the great things the Devils accomplished; instead it will be remembered for what could’ve been and of course their monumental collapse at the end of Game 7 of the Eastern Conference Quarterfinals against the Carolina Hurricanes.

All the pieces seemed to be in place this season and for the first time since the lockout, it appearred as though the Devils were poised for a long run in the playoffs. They had their few weak spots, but every team has those. However, the New Jersey Devils’ weak areas became abundantly clear in the playoffs and it wound up costing them their season.

The first problem, which had been there all season but only got increasingly worse in the playoffs, was the power play. The power play had been awful for pretty much the entire year. They brought in Brian Rolston in the off season to be the power play quarterback, but he had a terrible season and did not help out the power play.

The Devils were right in the middle of the pack in power play rankings somehow, but like the saying goes…sometimes the numbers don’t tell the story.

In the playoffs, the Devils were only able to score on three power plays and they were never really able to cash in on the opportunities. The fact that they weren’t able to take advantage of these opportunities, proved costly when the series came to a close. For example, in game 7 when the Devils were up 3-2 in the 2nd period, Zack Parise caught a stick up high and it cut him open. As a result of this, the Devils were given a four minute power play. A power play that was very uneventful and was a flat out failure. If the Devils scored here and went up 4-2, the Hurricanes would be on the golf course instead of New Jersey.

The next thing that went wrong was the play of the “no name” defense. All of these guys had done a great job all year, and in game 1 they shut down the Hurricanes and defenseman Mike Mottau even scored a goal, which is rarely seen by a Devils’ defenseman.

However, for the rest of the series the true colors of the defense became abundantly clear. They failed to clear the zone when the game was on the line, they were often out of position, and they allowed way too many shots on Martin Brodeur.

The fact that they struggled to clear the zone cost them three games in the series. If they were able to do this simple task, the Devils would have taken this series in 5. As far as the defenseman being out of position, this was mostly directed to Colin White and Niclas Havelid. Havelid found himself out of position on numerous occasions, which lead to many goals including Jussi Jokinen’s game tying goal in Game 7. Colin White was constantly getting beat because of his lack of speed, and he often got caught of of position on the quick Carolina forwards, which also lead to goals, including the series clinching goal given up to Eric Staal.

The defense only contributed offensively one more time in the series, which was when Andy Greene took a slap shot from the blue line, which David Clarkson was able to tip in the net, in Game 5.

The goal was huge, as it turned out to be the game winner. The Hurricanes defense contributed offensively and helped the Hurricanes win games. When the Devils D stepped up offensively, they too won games; unfortunately the defense only stepped up in two games, which was not enough for the Devils to win the series.

The biggest problem of all which lead to the downfall had to be the fact that the New Jersey Devils only had two lines which consistently contributed offensively and scored goals. Take a look at the four teams remaining in the playoffs. All four of these teams have more than two lines that contribute to scoring.

The best example is the Detroit Red Wings. This team is overloaded with depth, and lines one through four contribute night in and night out. Depth is what you need for your team to be successful in the playoffs.

The New Jersey Devils lacked depth. The first two lines were the only ones that ever did anything offensively. These lines included the “ZZ Pops” line (Zach Parise-Travis Zajac- Jamie Langenbrunner) and the “E-Z Going” line (Patrik Elias-Dainius “Minus” Zubrus-Brian Gionta). Occasionally they’d get goals from David Clarkson (who’s the team’s enforcer), Brendan Shanahan, Jay Pandolfo, and from Brian Rolston (who turned out to be one of the biggest busts of the season).

However, many other players never stepped it up when the team needed them the most. John Madden, Dainius Zubrus, Bobby Holik, and Mike Rupp were the guys who are supposed to be the veterans, but they played like they’ve never been to the playoffs before. They played a major role in why the Devils’ season ended so early.

All of these problems lead to the downfall of the New Jersey Devils in the first round of the 2008-2009 Stanley Cup Playoffs.

The Game 7 loss is a game that the players and fans will never forget. How do you play well for an entire game and then you fall apart in the final 1:20 of the biggest game of the season. It never should’ve occurred, but when your team has weak spots they tend to rear their ugly heads in the most inopportune times.

Thinking about this loss still stings. In all my years of watching sports I have never seen anything like it. The New Jersey Devils have a lot to fix in the offseason. They’ll need to patch up these areas and put together a team that can go deep into the playoffs.

There are many question marks heading into the offseason. Who won’t be back next year? Will Brent Sutter return as head coach? Is Brodeurstill the goalie he once was? Will there be some new players added to the roster? We’ll find out the answer to these questions in the near future.

For now, we’ll just have to enjoy the rest of the NHL season, and for Devil fans everywhere it’s another year of wondering what if?

4 thoughts on “What Went Wrong with the New Jersey Devils?”