There’s never a good time to make a trade. Too soon and you’re giving up on your team. Too late and you’re, well, too late.

This is the situation Peter Chiarelli is currently in with the Boston Bruins. For what it’s worth, the Bruins aren’t a bad team. If the playoffs were to start on Wednesday, the Bruins would be the second wildcard team, the last ones into the postseason from the Eastern Conference. In the league, they sit exactly at 15th overall. Not good, not bad, just mediocre. The Bruins went from heavy favorites to win the Atlantic Division to what we’ll call a “probable” team to make the playoffs. This is a departure of sorts for a team who has been a perennial Stanley Cup contender in recent years.

Now, in the first week of December, Chiarelli has scouted two games in as many nights in a non-Olympic season. He’s looking to improve his team, but where should he start?

The Bruins have been without Zdeno Chara for the last 15 games while David Krejci has only appeared in 11 of the team’s 26 contests this season. Losing your top defenseman and center would put any team at a sizable disadvantage and the holes left by injuries have certainly impacted some of the Bruins games.

According to War on Ice, the team’s PDO is exactly 100.00, even though they have the 8th worst shooting percentage in the NHL. Credit Tuukka Rask’s performance thus far to make up for the lack of offense. The biggest issue the Bruins are facing is not being able to withstand adversity and create offense with the current roster assembled as it is. Why are the Bruins, an organization that for so long have prided themselves on their depth, a completely different team with two key players out of the lineup? That’s the first question Chiarelli needs to provide an answer for.

The Bruins have allowed 63 goals on the season, still among the top ten stingiest teams in the NHL. They’ve scored the same number of goals this season too, leaving them with an even goal differential and amongst the bottom ten teams in the league in goals for. Consider this: for teams currently in the playoff picture, the Bruins have scored the least amount of goals. And as a comparison, last season at this time, the Bruins’ 75 goals-for stuck them in the middle of the league while the 53 goals-against placed them second best in the NHL. The Bruins need offense – especially after mustering up just one goal in their past two games. Did Jarome Iginla, Johnny Boychuk, and Shawn Thornton really leave that much of a hole? 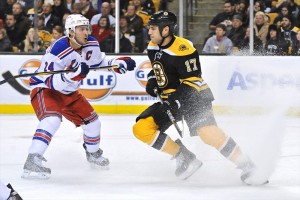 What’s wrong with the Bruins is that the players on the current roster aren’t progressing – they’re not getting better. A case can be made that only Dougie Hamilton and Carl Soderberg have improved from last season. After that, it’s tough to identify a current Bruin that hasn’t regressed, either a little, in Patrice Bergeron’s case, or a lot, like Milan Lucic. The Bruins need to play better on their own but they need some help, too.

Chiarelli noted that he was looking to add “heaviness” to the current roster in order to give the team an added level of physicality and toughness that’s been missing this season. Elliotte Friedman of SportsNet reported that Boston could be in on discussions to acquire Kings’ forward Jordan Nolan. Nolan has one goal in 15 games and his CorsiFor% of 46.8, according to Puckalytics, would actually be third lowest on the Bruins, only ahead of Daniel Paille and Gregory Campbell. While Nolan’s 221-pound frame would make him the second “heaviest” forward on the team, he’d only add to the logjam of mediocrity that the Bruins already have in their bottom-six. That’s not where they need help.

The Bruins actually have depth – plenty of it, in fact. It’s just in all of the wrong places. Fraser isn’t a top-nine forward right now and Griffith is somewhere between a third and fourth line winger that’s unfairly seeing time as a healthy scratch. Loui Eriksson is probably only ever going to be a third line winger at this point. And while we’re at it, the Bruins’ fourth line is totally ineffective and stale, combining for a total of 10 points even though they are the second most frequent line combination on the team this season, according to Left Wing Lock.

The Bruins need a game changer and it’s very possible that Chiarelli’s idea of that fix comes in the form of Chara and Krejci returning to the lineup. This is a tactic that Chiarelli has played in years’ past when an injured Bergeron and Marc Savard returned to the lineup in lieu of any external acquisitions. But the fact that Chiarelli was in Buffalo for the Sabres/Lightning game and then in Chicago for the Blackhawks/Blues tilt on back-to-back nights with the Bruins on a West Coast road trip suggest that he’s actively looking.

Two names that come to mind from both games are the Sabres’ Chris Stewart and the Blues’ Patrik Berglund. Both players have been rumored to be moved and both fit Chiarelli’s description to add “heaviness” to the lineup – Stewart weighs 231, Berglund, 217 pounds. The problem is that it still doesn’t address the Bruins’ scoring needs. Berglund has two goals and four assists in 24 games while Stewart has three goals and one assist in 25 games. Berglund is signed through 2016-17 with a 3.7 million cap hit. Stewart is a free agent after this season, but carries a heftier 4.15 million cap hit.

While this is pure speculation, these are the two names that would fit the bill of Chiarelli’s trade needs. They just wouldn’t do much as far as moving the team forward. They’d be more of a depth move and another vote of non confidence towards giving the younger players an opportunity to prove themselves and earn spots.

Chiarelli knows the Bruins aren’t a bad team. The players know it, the fans know it, and the media that covers them feel the same way even though they’d never tell you. The current roster must improve and certain players will have to step up and accept roles with key players injured. Sure, the Bruins will get better once Chara and Krejci return, but for now, Chiarelli must do what’s best for the team and that might be making a shakeup.