The Ottawa Senators recently tried to trade Colin Greening but did not find any suitors.  The team then decided to send Greening down to their AHL farm team, the Binghamton Senators, and he was able to pass through waivers without being claimed.

Living in Ottawa I actively engage with a number of bloggers and hockey analytics personnel who follow the Ottawa Senators.  Over the last few weeks I have seen a large dislike for Colin Greening the player and have wondered why.  We can use analytics to look into this player and see if he is as bad as the vocal twitter users claim.

Greening was drafted by the Ottawa Senators in the 7th round of the 2005 NHL Entry Draft.  In his Draft Eligible year he played in the BCHL where he scored 62 points in 56 points.  Greening then went on to the NCAA where he played four years with Cornell, in the Eastern Collegiate Athletic Conference (ECAC), scoring just shy of a point a game over his last three seasons.  Since graduating Greening has been playing in the Ottawa System. 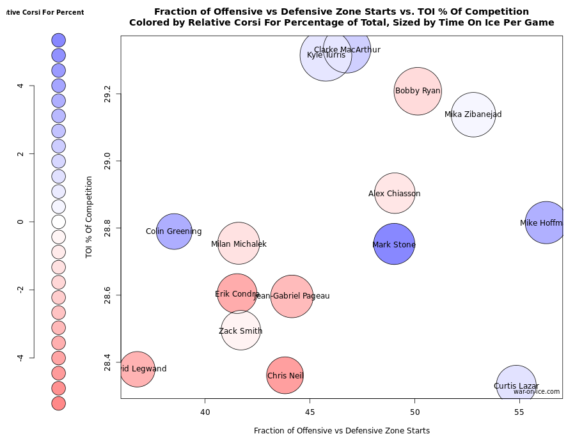 Analyzing Greening’s player usage chart, as seen above, he is starting play often in the defensive zone and playing against middling competition.  His Quality of Teammates (QoT) factor is 3rd lowest of forwards on the team and despite all of this Greening is a positive player in relative Corsi.  He did post a slightly negative relative Corsi in the full 2013-2014 season, when being deployed in a similar pattern, with his Corsi For bouncing above and below the 50% mark.

We evaluate his With-or-Without-You (WOWY) stats to see how he is helping his most common linemates.  The theory behind a WOWY is if teammates improve with a player that player is likely helping them on the ice and is considered a possession driver.  Greening’s 2014/2015 WOWYs are:

What stands out from this data is that Greening is not playing with very good players; his QoT is very low and this is going to affect all facets of his game which includes offensive point production, puck possession and the defensive side of the game.  We also see that Greening generally drives possession with his teammates.

Some of the dislike for Colin Greening stems from the fact he is not producing offensively.  In the last two seasons he has 18 points and 7 goals in 96 games.  This seems to be an issue of being snake bitten rather than the lack of Greening trying.  Greening has averaged almost 1.5 shots a game for the past two seasons which is a decent production given his low ice time (iCorsi/60 of 14.50 – 2nd highest on the team behind Mike Hoffman).  What hurts Greening is his low shooting percentage of 3.3% and 5.6% over the past two seasons, below his career average of 8%, with a very unlucky on-ice PDO of 94.2%.

From an analytical point of view Colin Greening is performing well on the 4th line.  The biggest knock against him is his cap hit of $2.65M which is more than a competitive team should be paying depth players.  As the Ottawa Senators are one of the lowest teams in salary cap spending this isn’t a concern, except against their internal cap, as they are not close to reaching the salary ceiling.

Currently Greening is 28 years old and past the peak age of forwards in the NHL.  Hockey is very much a “what have you done for me lately” game – with Greening’s lack of scoring and high salary cap it’s no surprise why he is not favoured by Ottawa fans and they wish to give an opportunity to younger players.  With that in mind, Greening is still a decent depth forward, it is too bad that the cognitive biases makes people forget the net good he is still providing on the ice.