Upon Boston’s shocking dismantling of the favored Penguins in last season’s Eastern Conference Final, endless questions immediately surrounded a Pittsburgh squad that so many thought would surely wear, at the very least, the Prince of Wales crown.  After all, this was a club that went “all in” at the trade deadline when G.M. Ray Shero supplemented arguably the most talented team in the league with additional scoring, character, toughness and versatility.  What’s more, he didn’t give up a single player from the Penguins’ roster to do it.  Unfortunately for Shero, though, the moves didn’t pan out and it was ultimately the Bruins that represented the Eastern Conference in the Stanley Cup Final.

Thus, after the Pens bowed out of the playoffs with a whimper, it was clear they would have a different look in the coming season.  Even if management wanted to keep this group together, not even the NHL’s executive of the year could make it happen with the salary cap set to shrink to $64.3 million for the 2013-’14 campaign.  Inevitably, some form of change was coming.  But following consecutive seasons that ended in disastrous postseason dismissals at the hands of the Bruins and arch-rival Flyers, many wondered just how different the Pens might look this year.   Would Kris Letang be dealt?  Would Marc-Andre Fleury survive his second straight poor postseason performance?  Would Dan Bylsma be back behind the bench?  With so much uncertainty, it seemed that at least one major shake-up would be coming to Western Pennsylvania. 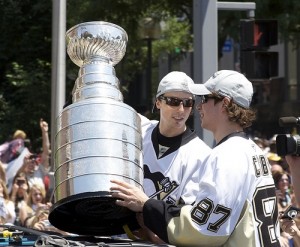 Marc-Andre Fleury hopes to prove Ray Shero made the right decision by holding on to him. Photo: “Cool Fleury” by michaelrighi

Nope.  While Shero let most of his trade deadline acquisitions walk as free agents (of the four, only Jussi Jokinen remains), the G.M. decided not to blow up a group that is a perennial contender, reached two Finals and brought home a Stanley Cup in 2009.  As a result, Pascal Dupuis was resigned; Evgeni Malkin, Chris Kunitz, Letang and Bylsma were all given extensions; and Fleury received a vote of confidence as the club’s franchise goaltender.  Shero even went a step further and brought back Rob Scuderi to fill a void on the back end that was admittedly never really addressed when “The Piece” departed for Los Angeles.

Quite frankly, it’s almost refreshing to see the Pens’ management take this approach.  Say what you will about Pittsburgh’s recent playoff performances but, in an industry full of knee-jerk reactions and “What have you done for me lately?” mentalities, Shero is drawing a line in the sand.  He’s standing behind a group that has won in the past, betting that they can come through again.  Maybe they will, maybe they won’t but the Penguins seem to be confident, at least for the time being, that blowing things up isn’t necessarily going to get them any closer than they are now.

Are the Penguins Trending Down?

Like every other club in this salary cap era, the Penguins have their share of question marks entering the 2013-’14 campaign.  From “How will Fleury rebound?” to “Is there enough depth beyond the top two lines?” to “Who will step up on the penalty kill without Matt Cooke?”, there are certainly concerns in Pittsburgh.  Consequently, a quick glance throughout social media reveals plenty of doubters out there:

@ColinPineauTHW @FredPoulin98 There was no way that team wasn't going to take a step backwards after all of that.

Obviously, it’s too soon to determine whether or not these claims will eventually, in fact, hold merit.  However, there’s been little indication that the Penguins aren’t still an elite level club.  The squad actually faced similar uncertainty coming into last season given Fleury’s subpar playoff performance against the Flyers and the departure of Jordan Staal, who joined his brother in Carolina.  All the Pens did was respond by earning the top seed in the Eastern Conference and marching all the way to the Conference Final.  And while the manner in which they were dispatched from the postseason was disappointing, Pittsburgh still managed to be one of the final four teams standing, something 26 other franchises would love to be able to say.

The Glass is Half Full

Despite the disappointing playoff exits the Penguins have suffered the last two years, the club is built to rank among the NHL’s elite for the foreseeable future.  While the team certainly possesses question marks moving forward, the strengths of the squad are still the envy of virtually every other organization in the league.

While bottom-six depth may be a weakness at the forward position, the Penguins  employ arguably the two most talented players on the planet, either of whom is capable (barring injury) of winning a scoring title in any given year.  Furthermore, Kunitz, Dupuis, James Neal and (possibly) Beau Bennett round out what most would consider the most formidable top-six in the league. 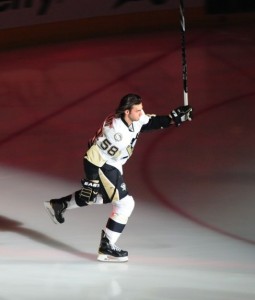 Kris Letang could really benefit from the return of Rob Scuderi. Tom Turk/THW)

Along the blue line, Letang provides Coach Bylsma with one of the most unique talents in the league.  While he can be inconsistent and even somewhat irresponsible at times, “Tanger’s” skill, tenacity and superior skating ability will surely keep him in the Norris Trophy discussion for the next several years.  Should he be paired with the ever-defensively reliable Scuderi, Letang’s game could potentially reach yet another level over the next several seasons.  What’s more, Brooks Orpik and Paul Martin – who was arguably Pittsburgh’s best defensemen last year – round out a solid top four, while the Penguins’ system is loaded with defensive prospects.

Finally, goaltending clearly represents the Pens’ biggest question mark and, given Fleury’s recent playoff performances, there is little doubt as to why.  Despite Marc-Andre’s recent poor postseason play, though, it wasn’t really goaltending that ultimately undid the Penguins last year.  No, in the end, it was Tuuka Rask’s stymying of Pittsburgh’s high flying attack that grossly overshadowed Tomas Vokoun’s own stellar play, a performance that proved the veteran Penguin netminder is more than capable of steadying the ship should “The Flower” falter.  Combine that with the fact that Marc-Andre Fleury should have all the motivation he needs to turn in a stellar campaign in 2013-’14 and Pittsburgh might be in better shape in net than people think.

Does all that mean the Penguins will necessarily return to Stanley Cup glory next season?  Of course, not.  The club was, after all, a heavy favorite to win it all in each of the last two years, only to come up short.  But, despite their recent struggles and the mounting critics who are all too eager to point out their shortcomings, the Penguins are still as talented and dangerous as any club in the league.  And in this age of parity and salary cap restraints, that’s really all anybody can ask for.