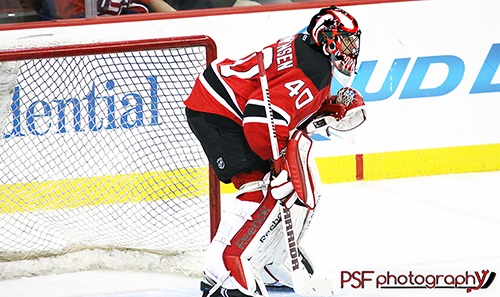 There’s one month and nine games remaining on the AHL docket for the Albany Devils. Their playoff hopes slim, better than none. While the parent New Jersey Devils were vanquished Sunday, Albany has a chance to make the Calder Cup Playoffs for a second consecutive season. After a hot beginning to their season, the A-Devils need a strong finish.

While math tells us the Devils can still qualify for the postseason, time may have other thoughts. Enter April and Albany is seven points out of a playoff berth. Albany’s 73 points trail the Worcester Sharks (80, seventh place), Portland Pirates (80, eighth place) and Springfield Falcons (76, ninth place). The most points the Devils can reach is 91 but the club is on pace for 82.

With 9 games remaining, the #ADevils are making their push. What to watch for this week → http://t.co/Tr4ZUSf1KP pic.twitter.com/GbNcsGZDlq

Following a brutal February, Albany rebounded in March. Headed into April, Albany rides a four-game win streak and has points in nine of its past eleven contests.

The Devils have four games left at home and five on the road. Within those nine contests, six feature opponents in current playoff position. Plus, the A-Devils play the Sharks and Falcons once more, both away. The schedule also has the Devils play three sets of back-to-back games, which includes one rough three-and-three, all on the road, at Binghamton, Hartford and Worcester. Although Albany does play two of its final three, along with the season finale, at home, they hope it isn’t too late by then.

Thompson's hat trick and Whitney's OT winner out of the box make up this week's #Top2Tuesday pic.twitter.com/Enu3wzpNL5

Albany is of course still paced by the offense of Paul Thompson and Joe Whitney. Last week, a pair of consecutive victories at Norfolk, saw Thompson net his second hat-trick of the season, while Whitney paced all scorers with two tallies and two helpers, also netting an overtime winner. Since being sent down at the beginning of March, Scott Clemmensen is channeling his heroics from the 2008-09 campaign with New Jersey, posting a 1.65 goals-against average and a .940 save percentage and is coming off a 37-save performance at Norfolk. Scott Wedgewood is repeating his solid late season play from a year ago, with a ledger of a 1.74 goals-against average and a .934 save percentage in March.

In addition, the A-Devils are getting contributions from Raman Hrabarenka and his four-game point streak, Captain Rod Pelley’s three points in four games and Mike Sislo’s four helpers in the last three outings. Defensively, Albany is tightening the penalty kill, staving off 20-of-21 (95.2%) in the past five outings and 35-of-37 (94.6%) in its past nine contests.

Once upon a time, in 1995-96, Albany set an AHL record with 13 consecutive road victories. If the Devils win out, it would be 13 straight wins overall. The way they are playing, the Devils are capable of putting a run together but time is ticking, the margin for error is slim but still better than none.