There is little point in trying to over analyze the fifth game of the Stanley Cup Final, a 4-2 win for the San Jose Sharks over the Pittsburgh Penguins. I’ll touch on the fancy stats. There will be a few comments on how San Jose was able to work the puck low and get three goals from these efforts. I’ll mention Joe Pavelski finally scored a goal in the series. I’ll note here Melker Karlsson’s energy and Logan Couture’s best scoring game of the series. But really, there were only two stories from Game 5. The first was how completely dominant Pittsburgh was in the skating part of the game. And second was how San Jose goalie Martin Jones absolutely stole the game.

Coming into Game 5, the Penguins led the series 3-1 for the most basic of reasons, they had outplayed the Sharks. They had outplayed San Jose by a very healthy margin in a couple of the games. In Game 5, Pittsburgh skated their best game of the series. They dominated the Sharks from the moment Dainius Zubrus flipped the puck over the glass for a delay of game penalty just 4:21 into the game. For the next 55+ remaining minutes, San Jose hung on for dear life.

Fortunately for San Jose, they’d managed two very early goals, both coming from getting the play deep into the Pens zone. Barely a minute into the game, Brent Burns took the puck behind the net before skating out front and firing in the game’s first goal. Barely a minute later, the Sharks pushed the play down low again, leading to Logan Couture deflecting home a shot from Justin Braun. The Sharks not only led for the first time in the series, they led by two goals less than three minutes into the game. 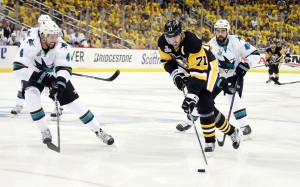 The Zubrus penalty, however, opened the floodgates for Pittsburgh. The Pens wasted no time in scoring on the power play, with Evgeni Malkin’s shot deflecting in off Justin Braun’s skate. Twenty seconds later, Carl Hagelin, my Conn Smythe leader at the moment, pressured Brenden Dillon into a turnover. Nick Bonino collected the puck at the point and sent it towards the net. Hagelin had moved quickly to the front of the goal. The puck glanced off his jersey and into the net to tie the game at 2-2. It was the third time in the series Dillon had the puck and Hagelin’s pressure created a turnover which quickly turned into a Pittsburgh goal.

The Sharks had one more goal in them later in the first period, on yet another play where the puck went deep. Brenden Dillon would get the puck to Logan Couture whose blind feed went perfectly onto the tape of Melker Karlsson. Karlsson’s shot put San Jose up 3-2.

The Nail-Biting Rest of the Game

That goal would stand up as the difference in the game for the next 44 minutes, until Joe Pavelski’s empty netter closed out the Penguins chances.

Those 44 minutes were among the most compelling of the series. Pittsburgh’s dominance during that time is hard to overstate. They doubled the shot attempts of the Sharks and that completely understates how much better Pittsburgh played. They had nearly continuous high quality chances. While the Sharks had few quality chances after the opening period, Martin Jones was making eye-popping save after eye-popping save. For the record, Jones saved 44 of 46 shots on goal. As brilliant as Jones was, a bit of luck also played a key role, most notably on Phil Kessel’s double post shot. Just a small portion of Jones handiwork is in the video below.

The fancy stats folks will find this game one for the ages. Every Sharks player had a negative Corsi. The best Fenwick for San Jose was Brenden Dillon’s minus-1. For Pittsburgh, 16 of their 18 skaters had a positive Fenwick. It really was that lopsided.

Each team skated 18 players. The 18 in the home yellow/black jerseys skated circles around the 18 visitors in white. The goalie in white made all the difference.

If the skaters duplicate their performance from Game 5, this series is unlikely to go past Game 6. For Pittsburgh, the challenge will be to maintain their intensity after their most frustrating game of the playoffs. For San Jose, the challenge will be to find ways to compete. Game 5 was, in most respects, a significant step back for San Jose. Only the grand theft goalie and the result on the scoreboard were steps forward. On this particular night, it was enough.

Pavelski’s empty net goal was the first empty net score of the series. It also means that all five games in the series have had a goal scored after the game’s 57 minute mark. For each late-game goal, the score was either tied or the teams were separated by just one goal.

Marc-Edouard Vlasic and Sidney Crosby were teammates on the Canadian Olympic team in Sochi and will be teammates again on Team Canada for upcoming the World Cup. But in Game 5, there was no love lost. They went after each other hard with a few seconds remaining in the game, earning matching roughing penalties.

Just before the start of Game 5, I took a look at NHL reseller ticket site and StubHub. Between the two sites, well over 3,000 tickets were available for Game 6 in San Jose. This is close to 20% of the capacity of the Shark Tank. Looking at the availability a few hours after the game, it had not changed much. It is possible many tickets will go to Penguins fans, as they are the only team which can win the Stanley Cup in Game 6.