VANCOUVER — Patrik Laine’s hat trick lead the Winnipeg Jets to a 6-3 win over the Vancouver Canucks on Monday.

The Finnish right winger put the puck into an empty net with less than two minutes to go seal the game.

Connor Hellebuyck stopped 22-of-25 shots for the Jets and Jacob Markstrom made 43 saves for the Canucks.

The Jets’ 49 shots on goal were the most Vancouver has allowed in a single game all season and extends the Canucks’ losing streak to six games.

Winnipeg opened the scoring just over a minute in after Markstrom tried to clear the puck along the boards. Little collected the puck at the point and hammered it in as the Vancouver goalie slid back into his net. 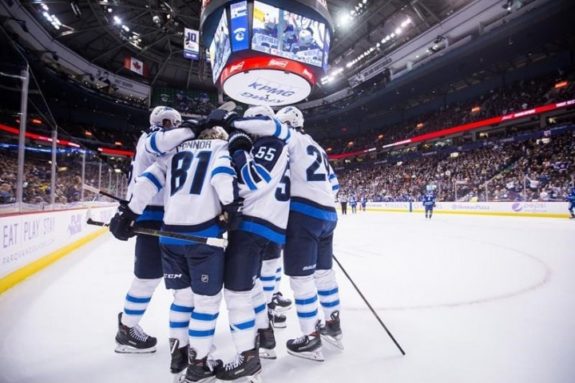 The Canucks responded with a power-play goal after Dustin Byfuglien was called for slashing.

Goldobin got a behind-the-back pass off to defenceman Ben Hutton, who sliced the puck to Pettersson. The Canucks rookie fired a rocket past Hellebuyck, tying the game.

Petterson now has 19 goals in his first 17 NHL games.

Markstrom faced a barrage of 23 shots in the opening period, including a hard wrister from Nikolaj Ehlers that went off his blocker.

The rebound popped out to the side and Scheifele poked it in to make it 2-1 for the Jets.

Winnipeg added another first-period goal when Connor popped in a top-shelf shot on the power play.

The left-winger is riding a five-game point streak where he’s notched four goals and three assists.

Midway through the second period, Pettersson and Hutton collided while trying to clear the puck from in front of the Vancouver net.

Laine took advantage of the opportunity, collecting the puck and getting off a quick wristshot that sailed past Markstrom to make it 4-1 for the Jets.

Motte clawed one back for the Canucks, scoring his second goal of the year on a short-handed breakaway.

It was Goldobin who brought Vancouver within one. The right-winger slid the puck across the crease, forcing Hellebuyck to sprawl, then tucked it into the net behind the netminder’s skate.

Laine registered two goals in the third frame for the sixth three-goal game of his career.

Both teams are now hitting the road. The Jets will be in Calgary on Wednesday to battle the Flames while the Canucks are off to California, where they’ll face the Anaheim Ducks on Thursday.