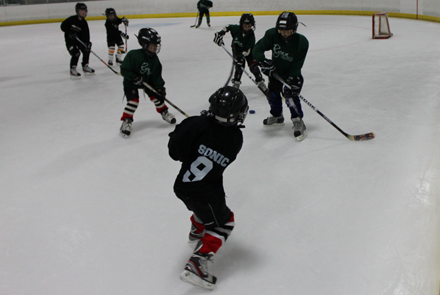 I am a hockey fan of all levels, and today I saw something hockey related that was quite disturbing.  While browsing my computer looking at national news stories I saw a hockey headline that made me sick.  I found an article on msn.com, and the headline read, “Youth hockey injuries border on child abuse.”  I could not believe what I had read.  I thought wait a minute, I am a parent of a youth hockey player, and is this guy saying I am abusive because I let him play?  I continued to read this article, and just shook my head.  The article was written by Art Caplan, Ph D..  It is obvious that he is not a hockey parent, or a hockey fan.  The article states that “If hockey does not change, it has a dim future.  Not because of the injuries being suffered by professional players but because of parents trying to do the right thing by keeping their kids away from a dangerous sport.”  I am a hockey parent, and I do worry about the safety of my child.  I also believe that we can only control a certain amount of dangers in their lives.  I do not in any way look at signing my son or daughter up for ice hockey a danger.  It is a controlled atmosphere on the ice, and yes injuries do happen, but the frequency has been over blown.  I fear much more danger in having my son play on the school playground.  Is it safer to send my kid up a ten foot slide, or send him on the ice fully decked out in protective equipment?  I will take my changes on the ice.

The article then goes on to state that the rates of injuries in youth hockey are frightening.  He stated that the New York Times reported in 2010 that in Alberta, a group of 9000, eleven and twelve year olds were studied.  A total of 700 concussions were reported that season.  I am not sure that the study really tells us anything.  That is a total of seven percent, but that is a extremely small, and localized study.  It also did not explain who diagnosed the concussions, and was it done by medical professionals or parents and coaches.  He stated that “they are so bad, it is hard to imagine a parent letting a kid play hockey.”  Is he insinuating that we are bad parents for allowing are children that privilege to play the game they love.  He also stated that the amount of children playing contact hockey in Canada is dropping, and stated “it is easy to see why.”  He had no statistics to back this statement, and failed to mention that USA Hockey numbers are on the rise.

Every kid playing youth hockey dreams of one time playing in the big leagues.  The reality of this is that it is very, very unlikely that they will play past high school.  In most cases kids will play the game for enjoyment, activity, and building friendships.  There is multiple times in this article that Dr. Caplan compares youth hockey players to National Hockey League players.  It is two drastically different levels of hockey.  He continually talked about what hockey parents think, and feel without being one, or asking any hockey parents.  He stated “It is one thing to face the risk of brain damage as an adult to get a big paycheck.  It is another thing for a parent to watch a school-age son get smacked in the head with a stick or have his head knocked into the boards.”  He followed that comment by speaking for us hockey parents by stating that “parents increasingly are going to feel they ought not let their kids play.”  I have not heard any talk of this around the rink in my hockey career.  In fact many hockey parents I have talked to have stated that taking hitting out of the game is actually more dangerous.  When hitting is allowed kids play differently.  They skate with their heads up, and protect themselves.  When there is no checking allowed, kids skate with their heads down and are unprepared for contact.  Inevitably contact happens, and their kid is not braced for it.  Most parents want their kid instructed on how to give, and receive a body check.

When I look at most injuries that happen in hockey very few happen on legal hockey hits.  A great deal of them happen on a rules infraction, and or cheap shots.  If you want to reduce the amount of injuries in hockey you must prepare children for contact.  The children crossing the lines of the rules must be dealt with severely.   The sport of hockey is as strong a ever, and the rules do not need to be changed to reduce injuries.  Players must be taught to protect themselves, and learn how to check within the rules, things will improve.  If the player does cross that line the penalties must be severe.  I want my children to grow up playing the great game of hockey.  I hope that they can enjoy this game, much like I do.  The hockey world is a tight knit family, and we look out for each other.  I get frustrated when I see all this negative press on the sport of hockey.  It does have its negative moments at times, but so does every major sport.  It just seems as if the media goes after hockey for every little negative thing.  It really upsets me when much of it is unfounded, or written by people who are not part of the hockey world.  Will we ever eliminate injuries in hockey?  No way, but we can reduce them by teaching and coaching.  I hope that my children are never injured on the ice, but I also hope that they are never injured off the ice.  I try to protect them off the ice, and on the contrary to what Dr. Art Caplan thinks “I am not a child abuser for having my child in youth hockey”!!

I am a hockey fan that enjoys every aspect of the game of hockey. I developed a hockey news, and information website in 2010, Inside Edge Hockey News.