For several generations of English-speaking Canadians, Bob Cole might be the most memorable voice from their childhood. For Americans and international viewers unable to view a CBC feed, you’re missing out on perhaps the most naturally talented sports media personality in the game of hockey. 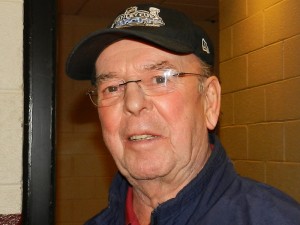 Starting in 1969 as a radio play-by-play man and moving to television in 1973, Cole has emerged as the epitome of “classic hockey voice”. While no one would read a transcript of a game called by Cole and confuse it for a Pulitzer Prize winning novel, his simplistic style is often imitated, but never matched. Simple catchphrases such as “Oh baby!”, “Wow!” and “Shot! Scores!” are captured by Cole in a perhaps dated style, but there’s little debate that Cole is among the all-time greats in terms of sports television play-by-play.

Cole’s role has been reduced since 2008, when the lead CBC job went to Jim Hughson. Most agree there’s always a sense of nostalgia when listening to a Cole-led broadcast.

While there are still a few who believe his best days are behind him, the rise of Twitter has shown Cole’s fandom thrives even to this day.  Cole has inspired at least two parody accounts, which is intriguing because it’s often tough to distinguish whether the tweets are actual Cole quotes, or rather just an embellished version of what Cole might have said. (You can see them here and here).

Toronto Star columnist Bruce Arthur captured the essence of Bob Cole, showcasing Cole’s voice as one that needs to be heard to be fully appreciated.

At the age of 80 years young, Cole’s obviously closer to the end of his career than the start, so it’s only fitting to take a look at just a few of Cole’s greatest calls.

Even though the Chicago Blackhawks ultimately fell in 7 games one of the greatest conference finals in recent memory, Michal Handzus’ goal in the second overtime of Game 5 sparked life into a Blackhawks fanbase desperate to return for another shot at the Stanley Cup. Cole was there to document it all, and his call of the third and overtime period(s) was only natural, as it was one of the most exciting prolonged stretches of end-to-end hockey one could ever see without a single goal being scored for over forty minutes.

Before Sidney Crosby’s heroics in Vancouver and Team Canada’s repeat in Sochi, Canada had been waiting 50 years for a gold medal in Olympic Men’s Hockey, a drought which seemed far too long for hockey’s original superpower. Joe Sakic’s goal in the closing moments was merely an insurance marker in a game that was already 4-2 with not much time left, but it helped seal all chances of an American comeback on home soil.

While the quality of this video isn’t great, there’s few (if any) more inherently exciting matchups than a Bruins-Canadiens playoff series. When an end-to-end rush leads to a goalmouth scramble and a missed open net to tie the game, Cole chose three words to describe the play in a very simple but effective way. 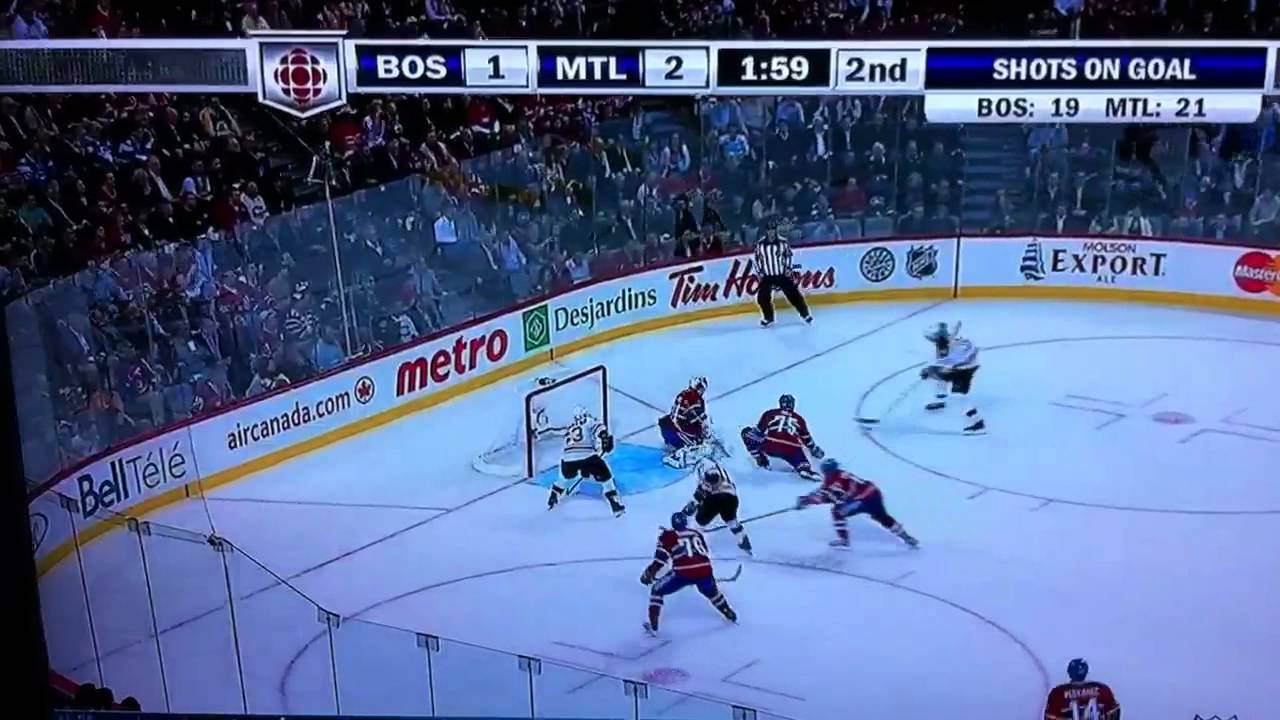 Although many of Cole’s classic moments feature Canadian teams, Original Six teams, or both, Cole has also called his share of games in non-traditional markets. The Pittsburgh-Columbus series from earlier these playoffs was a perfect example, as Cole was able to be on hand for Columbus’ first career playoff wins, including a late mishap of Marc Andre Fleury’s to send the game to overtime, where Columbus would quickly score the winner. 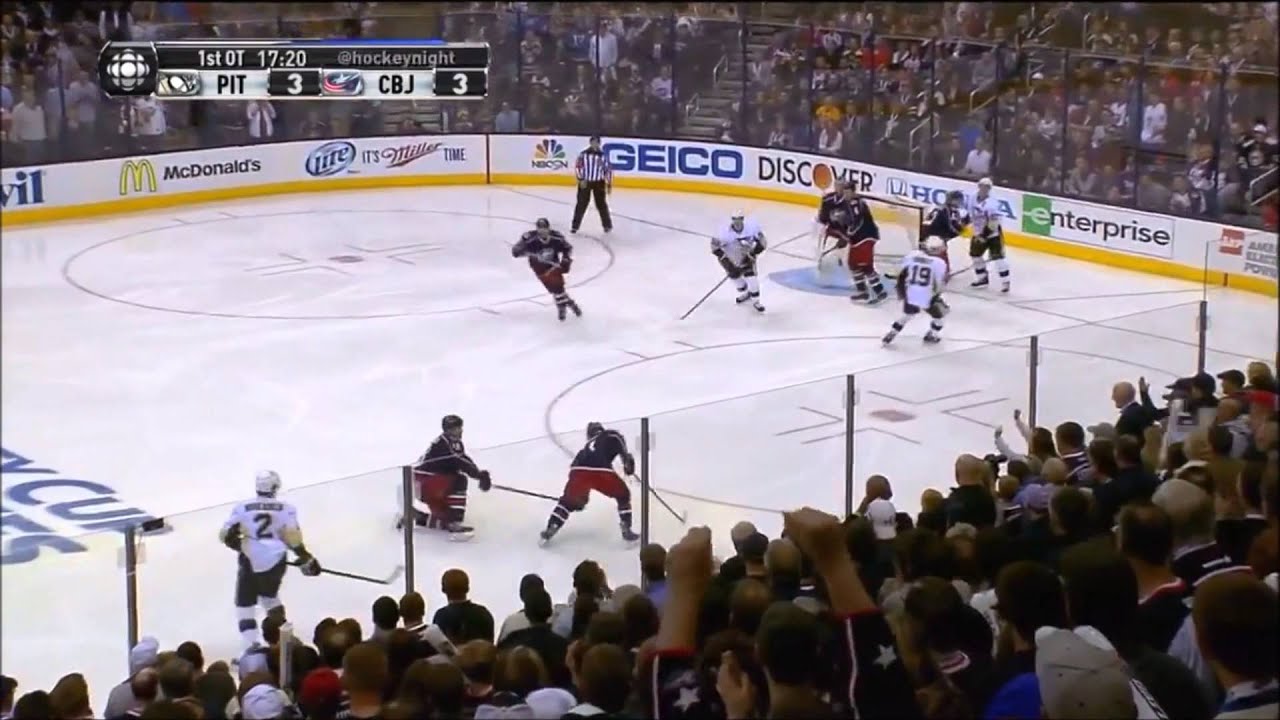 Classic Bob Cole line: “Out in front and they score. They score! And it tied… the game!”

While this isn’t actually a video clip of Cole calling a specific play, the audio listed comes from another Joe Sakic goal for Team Canada, this time in the 2004 World Cup of Hockey final. It’s a fun video to listen to for a few moments, as Cole packed three of his signature lines into one sentence, or three, depending on how you look at it. (For those interested, the actual goal can be seen here).

In what will surely be remembered as one of the most controversial Stanley Cup winning goals of all time, Cole called a triple overtime which culminated in Brett Hull’s infamous “skate-in-the-crease” goal. While Cole was clearly exhausted,

Classic Bob Cole line: “Can’t imagine how happy these players must be! Such an exhausting two months of hockey. And now, the big parade is on!”

The whole video is a 27 minute testament to Bob Cole, but it’s unlikely non-Red Wings fans would find the time to watch the full video. Starting at about the 22 minute mark however provides for plenty great Bob Cole moments, including his praise of Scotty Bowman as one the game’s all time great coaches and discussing Dominik Hasek’s first career Stanley Cup.

While Toronto ultimately fell short in their quest to face the eventual champion Montreal in the 1993 Stanley Cup Final, Borchevsky’s series-clinching goal lives on a a Leafs legend in a hockey-mad city starved for playoff success.

Classic Bob Cole line: “This.. has been.. an unbelievable turn of events!”

The 2003 playoffs were one to remember for a number of reasons, and it was only fitting that the final would be decided in the maximum seven games. The following pair of clips exhibit just what an exciting series and postseason year 2003 was.

Classic Bob Cole line: “Oh, this is something else!”

While Bob Cole has had his share of great NHL calls, he was also the CBC Radio play-by-play man for one of hockey’s most historic moments- Paul Henderson’s Game 8 Winning goal in the final minute of the 1972 Summit Series. Although much of Canada heard fellow broadcasting legend Foster Hewitt’s call of the game on TV, Cole’s call was no less impressive or memorable, capturing the true emotion Summit Series.

Classic Bob Cole line: “The team pours over the boards, they’re mobbing Henderson! They love him!”

While it appears that Cole will continue onwards with Rogers, it’s apparent that there will be a day in the future where Cole signs off on his final NHL broadcast, and with it a chapter of NHL history will have ended. As long as YouTube is there, though, Cole’s memorable calls will never be forgotten.