As teams approach the 20-game mark we are at an interesting point in the season from an analytics point of view. We start to have a solid idea of what team’s possession numbers truly are while the PDO numbers have regressed to the mean wrecking havoc within the standings. This leaves a number of different fans in different camps: those who have little knowledge of analytics firmly believing in the future success (or futility) of their team; those who don’t yet have a stronghold belief in analytics starting to waiver as they wonder “what if…”; and then there is the analytics camp who are 100% confident in the future outcome (though the outcomes don’t always happen).

We use two key analytic in this post: Score-Adjusted Fenwick (SAF) and PDO. For a reminder of these for the unfamiliar, Fenwick is a proxy for possession, or time in the offensive-zone, the higher your Fenwick the more often you have the puck and the more likely you are to score while less likely to be scored against. We use Score-Adjusted Fenwick to increase our sample size and include the team’s possession data in all states of the game (when tied, when leading, when trailing etc).

PDO is a representation for “luck” (i.e. when teams’ results are above/below their talent). It’s a summation of Shooting-Percentage + Save-Percentage as these numbers cannot be sustained at extremely high or low levels for long periods. Over a season they regress to 100%; playing with a PDO over 100% is considered “lucky” while less than 100% is unlucky. There’s much more to these data points but that’s a quick summary.

So how are the teams currently performing? Let’s chart the two numbers: 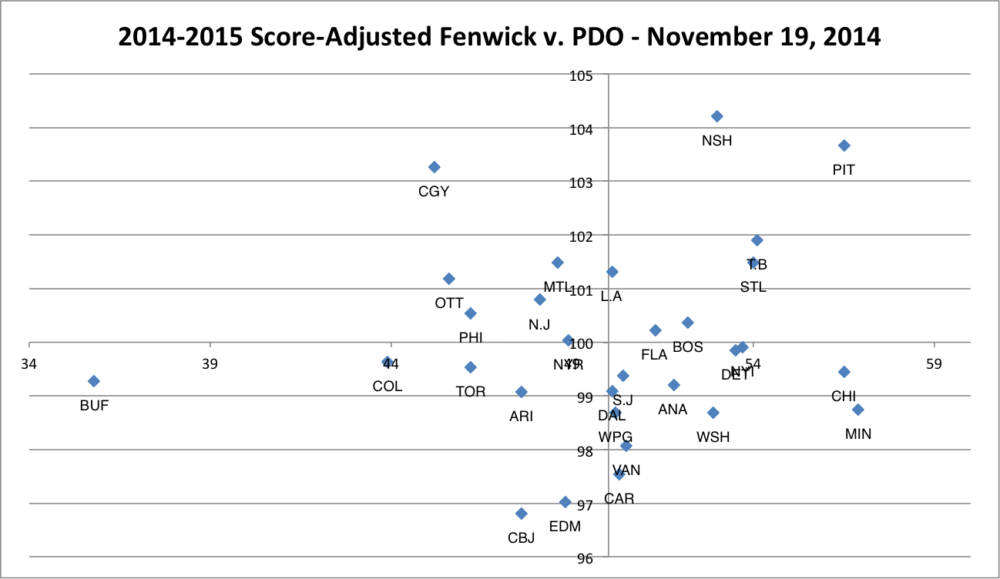 The above chart is all NHL teams currently with the x-axis being their SAF value while the y-axis is their PDO. The closer a team is to that horizontal axis, the more likely they have been playing at their true talent level. You’ll notice that the y-axis is shifted to the right and that is because Buffalo is so terrible this year that they skew most charts in hockey analytics; rarely do you see a team below 40% in possession (or higher than 60%).

The four quadrants separate the teams into four groups: the top-right group is the “Good and Lucky” group; the bottom-right group are those teams who are “Good and Unlucky”; the top-left column are the “bad and lucky” teams while the bottom-left are your “bad and unlucky teams”.

This chart allows us to quickly spot our outliers:

Calgary is by far this year’s biggest outlier. They are the definition of a team who is considered both bad and lucky similar to the 2011-2012 Minnesota Wild or the 2013-2014 Toronto Maple Leafs. If they are lucky and the puck-luck stays with them they may make out like the 2013-2014 Colorado Avalanche while earning a spot in the post-season while burning their likelihood of winning McDavid. They are currently sitting at a 45.2% SAF with a 103.26% PDO to compliment their second place standing in the division and tied for second in the conference thanks to both high shooting (10.61%) and save (92.66%) percentages. This success is not likely to continue so unfortunately Calgary Fans, while celebrating the success so far, should not expect it to continue.

Both of these teams fall into the “Good but Unlucky” category. Their possession numbers indicate they should be some of the better teams in the league but due to low PDOs they are not nearly as high in the standings as they could be. Minnesota is one of the league’s top possession teams at 56.9% but thanks to .900 sv% their PDO is at 9875 while they are sitting 5th in their division. Their possession numbers are comparable to Chicago so it would not be surprising to see them fighting for the division lead in April. In a similar situation is Carolina with its 50.2% possession and 97.54% PDO while currently sitting at 7th in the division and 3rd last in the conference so it would be expected that their should rise with the wins following. Washington could also be considered in this category.

Both of these teams are in the best position a team can be in: Good and Lucky. Both of these teams are sitting near the top of the possession standings at 53.0% and 56.5% respectively with high PDOs of 104.21% and 103.67% thanks in part to excellent goaltending and some strong offensive output. If you see these teams fall in the standings don’t be too alarmed, it is just them regressing to the mean. Towards the end of the season it would also not be a surprise to see them fighting for their division leads.

The Columbus Blue Jackets are a bad team that is having their bad record made seemingly worse by their unlucky PDO. While their possession is in the negative at 47.6% they are not as bad as their 96.81% PDO has made them. Columbus has the worst PDO in the league making them the most unlucky team largley in thanks to their Sh% stuck at an unsustainable low 6.3%. Despite the Jackets sitting in 29th place in the league their 22nd best possession numbers should see them rise which doesn’t bold well for their good draft pick position.

The Buffalo Sabres are in a unique position where their performance is not being terribly affected by their 99.28% PDO. Their possession numbers are so terrible that they are the worst team in analytics history for as far back as our records to go.  With how bad of a team they are, a 99.28% PDO might be their true talent level. You would almost think that with a 35% SAF Buffalo is trying to be bad this year for reasons I cannot figure out.