They may seem outrageous and in no such way plausible, but when it comes to fantasy hockey, you need to be bold. Here are 40 bold fantasy hockey projections for the upcoming season that I strongly believe in. Keep in mind that there is a strong chance I will be completely wrong on some of these, so take it with a grain of salt as it is just a way to have fun. When the end of the season comes, we will let the stats do the talking.

1. Slava Voynov notches 50 points, leading all Kings defensemen in scoring and finishing amongst the top 10 NHL blueliners in scoring.

2. Tyler Seguin takes off with his new team, hitting the 80 point mark. Loui Eriksson does well with Boston but doesn’t surpass 60 points due to all the balanced scoring. 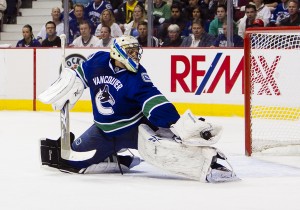 Roberto Luongo returns to being one of the best.

3. Taylor Hall leads the Oilers in goals once again but Jordan Eberle leads the team in points.

6. Erik Karlsson and Kris Letang fight for the defenseman scoring title all year with Karlsson finishing with less than a five point lead over Letang.

7. John Tavares hits 90 points for the first time in his career.

8. Ryan Kesler bounces back for Vancouver with a 30 goal, 60 points season.

10. Brayden Schenn has a breakout year with the Flyers, potting 20 goals and 65 points.

11. Not a single player on the New Jersey Devils breaks 60 points.

12. At least five players on the Edmonton Oilers break 60 points.

13. Sven Baertschi puts together an impressive campaign with the Flames, coming close to the 50 point mark.

14. A finally healthy Mike Green returns to being an elite fantasy hockey defenseman, finishing with 50 points.

16. Logan Couture proves to be the best fantasy option on the San Jose Sharks.

17. Jakub Voracek builds on his breakout season with the Flyers, hitting 70 points.

18. Mike Ribeiro is the only player on Phoenix to crack 60 points.

20. Tyson Barrie breaks out with a 40 point season for the Avalanche, becoming a fixture on the team’s top power-play unit.

23. Justin Schultz finishes among the top ten in defensemen scoring.

24. Pavel Datsyuk and Henrik Zetterberg both finish with 70 points.

28. Jake Gardiner almost finishes with as many points as Dion Phaneuf.

29. Steven Stamkos finishes with the most points in the NHL.

32. Danny Briere surprisingly puts together a 20 goal, 50 point season with his new team

34. Tyler Myers finally bounces back with a 45 point season on the blueline for Buffalo.

36. Mikhail Grabovski surpasses 60 points in his first season as a Capital.

Okay I was kidding on that last one.