Detroit Red Wings rookie goalie Roger Crozier continued his storybook season last night by taking a two-goal lead over Toronto Maple Leaf goalies Terry Sawchuk and Johnny Bower in the Vezina Trophy race as Detroit downed the Leafs 4-1 in Toronto.  In the other scheduled National Hockey League match, the lowly Boston Bruins shocked the Montreal Canadiens by drubbing them 6-2 right at the Forum in Montreal.

Trailed by a goal going into the game

Crozier entered the game one goal behind the Toronto goalie combine, but his team mates seemed intent on giving the rookie every chance to win the goalkeeping award and the $1,000 prize money that comes with it.  They out-skated the Toronto club by a wide margin right from the opening faceoff and only Toronto goalie Johnny Bower’s fine play limited the visitors to a single goal in that initial frame. 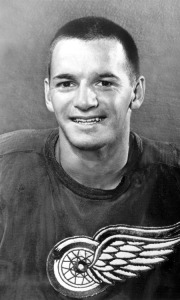 Pit Martin’s eighth goal of the season opened the scoring for Detroit.

After leading 1-0 at the end of one, the Wings added another couple of goals in the middle stanza and the issue was no longer in doubt.

Pit Martin, Eddie Joyal, Paul Henderson and Norm Ullman were the Red Wings marksmen.  Ullman’s goal was his 42nd of the season, while for the other three, it was each their eighth.  Rookie Ron Ellis notched his 23rd for the Leafs.

Bower was great for Toronto in a losing cause.  The 40-year-old veteran made 36 saves.  He was especially sharp in the opening period when the Wings pumped 15 tries on the Toronto goal.  Crozier had a bit of an easier time, making 29 stops for the Wings.

The Boston Bruins took advantage of a Montreal Canadiens team that was obviously looking  past this weekend to the upcoming Stanley Cup playoffs to coast to a 6-2 win over the Habs.

A couple of defencemen got the Bruins off on the right foot.  Don Awrey and Ted Green scored their second and eighth goals respectively before eight minutes had been played in the game.

After Jean Beliveau got Montreal on the board early in the second, Boston answered with three more from Tommy Williams, Wayne Maxner and Johnny Bucyk to up their lead to an insurmountable 5-1.  Henri Richard potted his 22nd of the year with two minutes to play in the middle frame to make it 5-2, but at that point, all the Montreal horses had vacated the barn. 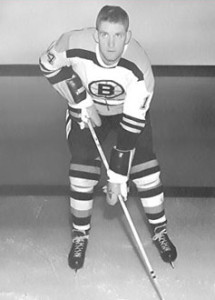 The Bruins added one more goal in the final frame, thanks to a good effort by Orland Kurtenbach, his fourth.

Following up on his idea to rotate his goaltenders on a 30-minute basis, Montreal coach Toe Blake switched his netminders at the half-way mark of the second period.  Charlie Hodge started between the pipes for Montreal and was replaced by Gump Worsley half-way through the second.  Hodge made 14 saves, while Worsley stopped 12, with each giving up three goals.