The Oshawa General opened the new Oshawa Civic Arena last night before 4,100 enthusiastic fans with a come from behind 6-4 win over the St. Catharines Black Hawks.  The Generals survived a jittery start, looking almost a little star-struck, before setting down and taking over the game.

The Generals were without several key performers, including regular goalkeeper Dennis Gibson.  Ian Young was summoned from Junior B and played very well for the home side. 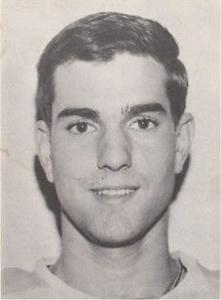 The Generals returned to the OHA Junior A ranks last season and played in Bowmanville until the new rink was ready for action last night.  They left the OHA back in 1953 when the original Oshawa Arena was destroyed by fire just prior to the 1953-54 season.  Although that team disbanded, it later came together to form the nucleus of the legendary senior Whitby Dunlops.

The Russian national ice hockey team, fresh off a convincing victory over Canada’s national squad, ran into some surprising opposition last night at Fort William, Ontario.  The Lakehead All-stars, a team made up of  players from the Thunder Bay Senior League, augmented by a few local juniors, held the Russians to a well-played 3-3 tie before 4,500 fans.

Two of the junior players, who were added only Monday night and didn’t have a chance to practice with the club, scored third period goals to give the all-stars the tie.

Lakehead scored on the first shot of the game, at the 17-second mark on a goal by Roger Sawicki.  The Russians came back to eventually take a 3-1 on goals by Alexandr Alatov, Veniamin Alexandrov and Konstatin Loktev.

Then the juniors, Bob Munro and Murray Smith of the Fort William Canadiens, notched their final frame markers to knot the score at three. Lakehead goaltender Joey Bamford  stood his ground and denied every Russian opportunity to keep the score intact.

Toronto Maple Leaf president Stafford Smythe was so disenchanted with the calibre of play shown by Canada’s national team against the Russians in Toronto on Sunday, he has requested that they be replaced by a team of NHL Oldtimers for an upcoming exhibition game against the Czechoslovakian national team.

Smythe said he would make the request to the Canadian Amateur Hockey Association after the Canadian team’s poor performance against the Russians.  When presented with the possibility the CAHA may refuse the request, Smythe was quoted as saying, “Then I’d have to seriously consider closing the doors and refunding money paid for tickets.” 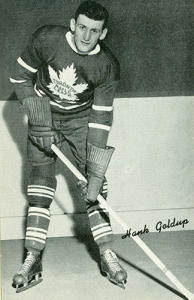 Hank Goldup, who manages the NHL Oldtimers team, said his group would love to play the Czechs, with some additions to their roster.  Former NHL stars Sid Smith, Cal Gardner, Barry and Brian Cullen, Murray Henderson and Ivan Irvwin play for the Oldtimers.  Goldup said some of the additions he would like to make include Hank and Steve Monteith, and Grant Moore from the University of Toronto, Wayne Carleton of the Marlboros Junior A Club, and ex-pros Danny Lewicki, Jack McIntyre and Earl Balfour.

The Rochester Americans seven-game winning streak came to a thundering halt last night at the hands of the Quebec Aces in Quebec City.  In an American Hockey League battle of division leaders, the Aces claimed a 3-1 victory. 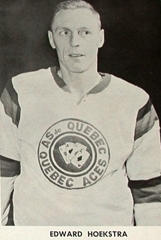 Red Berenson, Guy Rousseau and Ed Hoekstra scored third-period goals for the Aces.  Dick Gamble’s first-period marker was the only shot to get by Aces netminder Gump Worsley.