On January 1, 2008, the NHL held its inaugural marquee regular season event, the Winter Classic, at Ralph Wilson Stadium in Orchard Park, New York. The outdoor game between the Buffalo Sabres and Pittsburgh Penguins was an immediate success for the league. The next year, the event moved west to the Windy City where the Chicago Blackhawks faced off against the Detroit Red Wings in the highest rated televised hockey game in over three decades.

Since then, there have been four other Winter Classics with the only pause being in 2013 due to the lockout. In total, nine teams have participated in the six years it has been held with the Red Wings, Penguins, and Philadelphia Flyers each appearing twice.

This year’s game is set to be played in Washington D.C. at Nationals Park. Playing against each other will be the Blackhawks and Washington Capitals – two teams that have already made appearances in the event.

There is no doubt that the brainchild of NBC executive Jon Miller will be here to stay for a long time. The game has twice reached TV ratings of 2.9; most recently in 2014 when the Toronto Maple Leafs played the Red Wings at the Big House in Ann Arbor, Michigan. That game also had a record setting attendance of 105,491. 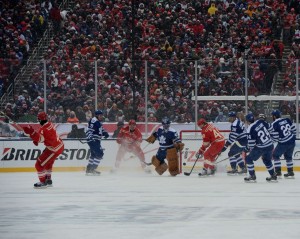 HBO even joined in on the fun when it produced three parts for its reality television series 24/7. The series followed the two teams in the weeks prior to the big outdoor game and gave fans a glimpse of what happens behind the scenes leading up to gameday. Even though HBO opted out of this year’s event, the popular series will live on with EPIX taking over.

The need for new teams to be involved

Recent news of the Boston Bruins being the front-runners to host the 2016 Winter Classic has many fans of other teams crying favoritism. It’s no secret that league commissioner Gary Bettman and NBC executives are trying to feature teams in large market areas but they are missing an opportunity to draw in new fans to the sport or add to an already large fanbase such as Minnesota’s. A game between the up-and-coming Minnesota Wild and perennial Cup-contenders St. Louis Blues in a hockey-crazed state like Minnesota would be tantamount to holding it in the northeast.

If the league decides to not host the game in small market areas, then they should consider featuring teams with small fan bases that need an infusion of prime time spotlight. Teams like the New York Islanders, Tampa Bay Lightning, or even Ottawa Senators have plenty of talent on their roster for an exciting game.

So how about it, commissioner? If Boston does end up being the host city (again), will you at the very least let other teams join in on the fun?