A busy Sunday evening  in the NHL as a full slate of three games was played.  The Detroit Red Wings maintained their hold on first place with a 6-2 pasting of the New York Rangers, Toronto dropped their second straight game, 4-2 to Chicago and the Boston Bruins surprised everyone by holding the Montreal Canadiens to a 2-2 tie.

At New York, Rod Gilbert gave the Rangers a 2-0 lead with a pair of second-period markers before the Wings exploded for six unanswered goals to win this one going away. 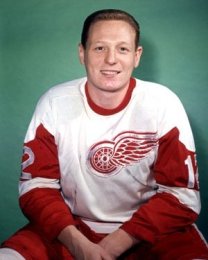 The Red Wings tied the score before the second frame ended on goals by Bruce MacGregor and defenceman Doug Barkley.  In the third, MacGregor counted again with what proved to be the game-winner just over seven minutes in.  Lowell MacDonald, Ron Murphy and Ted Lindsay followed up to make the final score 6-2.   Detroit outshot New York by a margin of 31-19.

In Chicago, the Bobby Hull Show!

In Chicago it was the Bobby Hull show, as the high scoring left winger of the Chicago Black Hawks fired three goals to lead his team past Toronto 4-2.  It was a game that drove home the message to the Leafs that without their two top stars Davey Keon and Frank Mahovlich, the rest of the team has to come up with a superlative effort.  While the Leafs mailed in a clunker against Boston on Saturday, last night’s game was an exciting affair.  The team gave a good effort, but just was unable to match the Hawks’ firepower. 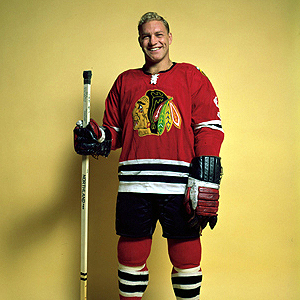 Stan Mikita gave Chicago a 1-0 first period lead before Andy Bathgate pulled the Leafs even halfway through the second.  Hull’s first of the night a couple of minutes later put Chicago up by one, but Tim Horton’s tally late in the second made things all even going to the third.

Hull put the Hawks ahead for good early in the final frame when Carl Brewer lost the puck at the Leaf blue line.  It eventually made its way to Hull whose rocket  from 30 feet caught the corner on Leaf goalie Johnny Bower.  The final goal of the night came when Hull recovered his own rebound off a fine save by Bower and shot it in off the Leaf netminder’s pad.

After the game, Hull, who played more than 40 minutes, was more interested in discussing Frank Mahovlich’s illness.  He told the Toronto Star’s Red Burnett:

“I hope there is nothing seriously wrong with the big guy.  We’ve heard a lot of wild rumours down here.”

About the winning goal, he said, “I was lucky to get two chances.  Bower stopped my first shot, the puck came right back to me and I just managed to spear it in off his pad.”

EJ was OK for Bruins

In Boston before a sellout crowd of 13,900 the Bruins tie with the Canadiens left them unbeaten in five of their last six games.  It was goaltender Ed Johnston who was mainly responsible for the single point tonight with two spectacular saves in the third period.

Gilles Tremblay scored both Montreal goals, while Forbes Kennedy and Dean Prentice replied for the Bruins. 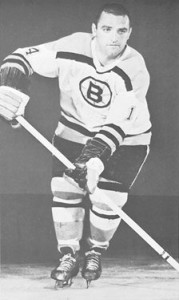 Johnston made 37 saves and had no chance on the two goals that did get by him.  Coach Milt Schmidt said that the dark-haired backstop has had only one bad game all season.

Although the Bruins had Murray Oliver back in the lineup, left winger Johnny Bucyk was unable to play after injuring his shoulder against Toronto on Saturday.  The game was a fast-skating, hard hitting affair.  Ted Harris of Montreal and Ted Green of Boston handed out most of the bruising body checks, keeping the forwards on both teams honest all night.

In the American Hockey League game at Buffalo last night, the Bisons came from behind to sink the Baltimore Clippers 3-2.  Art Stratton scored the first two goals for Buffalo, with Gerry Melnyk netting the winner.  Jean Ratelle and Dave Richardson connected for the Clippers. 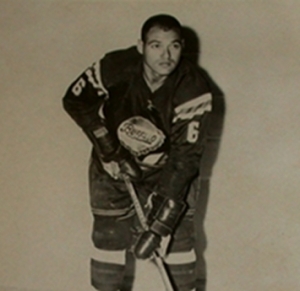 The Bisons played with only 14 skaters, as Ray Cullen was unable to suit up because of a bruised left hand.  By the end of the night they were down to 13, as defenceman Ian Cushenan had to leave thanks to a recurrence of a back ailment that has been bothering him off and on all season.  It looks like no help is on the way from the parent Black Hawks, so the trip to Quebec on Tuesday could see the Herd with only 13 skaters once again.

At Quebec City, the Providence Reds doubled the count on the home-town Aces 4-2.  Although six goals were scored in the game, only three players were responsible.  Jimmy Bartlett and Len Ronson had two each for Providence, while Terry Gray tallied twice for the Aces.

In the other AHL game, Pittsburgh got by Springfield 3-2.  Playing coach Vic Stasiuk scored the game-winner for the Hornets in the third period on an end-to-end rush that ended with him making a beautiful move on Indians goalie Jacques Caron.

OHA: Flyers, Marlies tie it up in a wild one

Before a crowd of over 10, 400 fans at Maple Leaf Gardens yesterday afternoon, the Niagara Falls Flyers came from behind twice to battle the Toronto Marlboros to a 5-5 draw.   The other OHA games saw Montreal double Hamilton 6-3, Kitchener down Oshawa 5-3 and Peterborough defeat St. Catharines 4-1.

Even though all the Flyers – Marlies scoring took place over the first two periods, it was the third that produced the most excitement.  That final frame saw end-to-end hockey, great goalkeeping and a little bit of everything.

Niagara Falls netminder Doug Favell engaged the Marlies’ Neil Clark in fisticuffs early in the third.  The fight started with a slashing and stick-swinging exchange, and ended up in a fist fight between the two.  Each player received minor, major and misconduct penalties.  Bud DeBrody served Favell’s sentences.

Mike Corrigan scored twice for Toronto.  Single goal-getters were Al Osborne, Mike Byers and Jim McKenny.  Bill Goldsworthy and Don Marcotte  had a pair each for Niagara, with Brian Bradley adding a singleton.

Niagara outshot the Marlies 44-32, and only the great work by Toronto goalkeeper Gerry Desjardins kept the Falls from running away with this one.

Don Leismer led Montreal past last-place Hamilton with a two-goal performance.  Others came from Rene Drolet, Carol Vadnais, Jacques Lemaire and Norm Ferguson.  Jimmy Peters was a 2-goal scorer for Hamilton with Real Lemieux netting the other.

Kitchener got two goals from  Jack McReady in their win.  Sandy Fitzpatrick, Pete Brennan and Billy Hway netted the others.  Chris Hayes, Ron Buchanan and Wayne Cashman had the Oshawa scores.

Danny Grant paced Peterborough over St. Catharines with a pair of markers.  Garry Monahan and Billy Plager each scored once.  Ken Hodge had the only Black Hawk goal.