The Russian National Hockey Team finally got its wish of playing against professionals last night, albeit it was the Montreal Junior A Canadiens, a team augmented by pros from North America’s top minor league.  The Russians won the game 3-2, but former NHL’ers Doug Harvey and Gump Worsley, now with Quebec of the American Hockey League,  were not impressed.

Harvey, who played nearly 50 minutes on defence for the Junior Habs, characterized the Russians as no better than a good intermediate team. 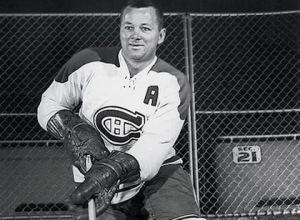 Doug Harvey played nearly 50 minutes, was not impressed with Russians

“Under our rules they’d be a good intermediate team with a fair system.  The switch to international rules hurts any of our clubs for a one-shot game like this, especially not being able to use the body while forechecking and being unable to shoot the puck over the blue line.  I didn’t see a National League player on the Russian team but a few might make the American League.”

“For one game they can get away with stuff like the drop pass, but we’d soon catch on to their system.”

Goaltender Worsely played a strong game, especially in the first period when the Canadiens were slow to start.  Gump was unimpressed with the Russians’ shooting skill.

“They are accurate shooters but they haven’t half the zip in their shots that the NHL’ers have.  They play hockey like a checker game and almost over-pass like the New York Rangers used to, but they don’t give the puck away.  A good American League team would give them a good shellacking.”

Red Berenson, another Quebec Aces AHL’er, played against the Russians with Belleville in the 1959 World Championships.  He feels the Russians have improved since then.

“They have a more flexible attack.  They don’t use as many set football-style plays as they did five years ago and are playing a more individual type of game.”

Bowman: It could have gone either way

Junior Canadiens coach Scotty Bowman said, “It could have gone either way.  The Russians aren’t any better than they were.”

A sellout crowd of 15,678 at the Montreal Forum gave both teams a standing ovation at the end of the exciting game.  Russian scorers were Veniamin Alexandrov, Alex Almetov and Yuri Volkov.  Bill Sutherland and Leon Rochefort fired the Canadien goals, with Berenson assisting on both.

The Rochester American defeated the Baltimore Clippers for the fourth time in five meetings this season in the American Hockey League’s only game last night. 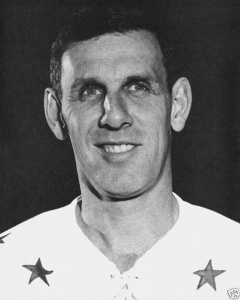 The Toronto Marlboros, the OHA Junior A league leaders, lost their second game in as many nights as they dropped a 3-2 decision to the St. Catharines Black Hawks at Maple Leaf Gardens.

The game featured great goaltending at both ends, with Hawks’ netminder Bob Groh making some amazing saves.  Groh is the Hawks’ backup, and had played only four periods previously this season.  He was given the start by coach Chirp Brenchley, who had decided to give regular goalkeeper Bob Taylor a night off.  Marlies netminder Gerry Desjardins was also solid and could not be faulted for the loss.

Maurice L’Abbe, Bob McAlpine and Wayne Maki scored for St. Catharines.  Paul Laurent, with his 22nd of the season, and Wayne Carleton replied for Toronto.

In the other OHA game, the Niagara Falls Flyers withstood a furious late rally and hung on to defeat the Oshawa Generals 5-4 in Niagara Falls.

The Flyers led 3-0 after two periods and had a 4-1 margin with ten minutes to play in the game.  Bill Goldsworthy led the Flyers with two goals.  Other Falls scorers were Brian Bradley, Jim Lorentz and Derek Sanderson.  Ron Buchanan was a two-goal shooter for Oshawa.  Chris Hayes and Wayne Cashman had the others.