He spent parts of seven seasons with the Toronto Maple Leafs and captained them for six of them. Now, seven years after the Leafs traded for Dion Phaneuf, the defenceman platoons the blue line in Ottawa and fans of both the Flames and Leafs are left questioning whether or not there was a winner from the seven-player blockbuster between the two clubs back on January 31, 2010.

The Maple Leafs were in the midst of their longest playoff drought in 2009-10. Already having missed the postseason in four consecutive seasons, Toronto had no idea that they were on the road to another year without playoff hockey (and another two years were set to follow).

At the time, the Leafs were 17-28-11 on the season. Clearly, things couldn’t get much worse for the club. On the other side, the Flames weren’t in as bad of a place with a record of 27-20-8. But the two teams decided to make a trade that included seven players – two of whom remain in the league today. 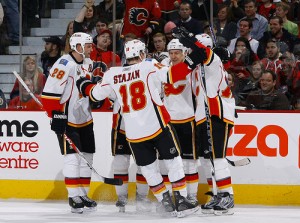 Matt Stajan is the only player from the seven-player trade that remains with either of the two clubs. (Phillip MacCallum/Flickr).

Phaneuf was a banger on the Flames blue line, but had an offensive side to his game as well. He had 49 penalty minutes to go along with 22 points (10g-12a) in 55 games for Calgary before he was shipped out. Aulie, was a major component of the trade and came with high praise and lots of promise.

Well, the trade never entirely worked out – for either team.

Neither team ended up making the playoffs that season, with each club having one postseason appearance since the trade. The Leafs faced a heartbreaking defeat at the hands of the Bruins in Game 7 of the 2012-13 Conference Quarterfinals while the Flames had an unlikely run into the second round of the playoffs in 2014-15.

When it comes to the players acquired in the trade, Calgary’s acquisitions weren’t around much longer afterwards. Hagman finished the season with the Flames and played 71 games in 2010-11. Eight games into 2011-12 he was placed on waivers and the Anaheim Ducks picked him up for the remainder of the year. That was his last stint in the NHL. With the Flames, he played 106 regular season games and notched 42 points (17g-25a). 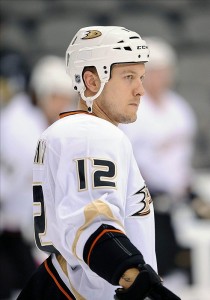 Niklas Hagman was placed on waivers by the Flames and finished his career with the Ducks. (Jerome Miron-US PRESSWIRE)

Mayers walked in free agency following the season and played three more years with San Jose and Chicago. In the final 27 games with the Flames in 2009-10 he scored just six points (1g-5a). White started the following year with Calgary before he was shipped out to Carolina followed by San Jose. He played two more seasons with Detroit before joining Russia’s KHL. While with Calgary he played 43 games over parts of two seasons with 18 points (6g-12a) to show for it.

In the White trade, the Flames acquired Anton Babchuk and Tom Kostopoulos. Babchuck played 104 games for Calgary with 38 points (10g-28a). He fizzled out of the league in 2012-13 after just seven games. Kostopoulos recorded 26 points (11g-15a) in 140 regular season games for the Flames. He left for New Jersey during the offseason following the 2011-12 season.

When it came to the Leafs, they too had some duds from this trade. Sjostrom played one more year with the Leafs before his NHL career was over. In total, he played 85 regular season games for the Leafs with just 10 points (4g-6a) to show for it.

Aulie was up and down in the Leafs organization. He never really got a chance to stick with the big club. He played 57 games for Toronto’s big club with four points (2g-2a) to show for it. The Leafs eventually moved him to Tampa Bay for Carter Ashton. Ashton played 54 games for the blue and white with three assists before he, too, was moved in 2015 along with David Broll for a conditional sixth-round pick.

Phaneuf played 423 games for the Leafs – captaining the club for most of them. He notched 196 points (45g-151a) over that span and helped the team to a postseason birth in 2012-13. In seven games against Boston he had a goal and three points. After signing a massive contract with the Leafs in 2013-14 worth $49-million over seven years, it was debated whether or not the Leafs would ever be able to move him when they decided they were going to rebuild. 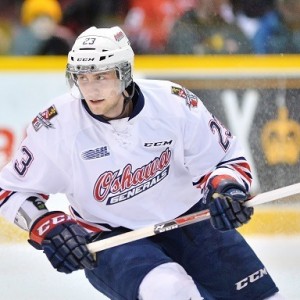 While it’s still too early to tell, 21-year-old Tobias Lindberg could be a valuable return in the Phaneuf trade to Ottawa. (Terry Wilson/OHL Images)

However, the Leafs ended up trading the gritty defenceman along with Matt Frattin, Casey Bailey, Ryan Rupert and Cody Donaghey to their division rival Ottawa Senators in exchange for Jared Cowen, Colin Greening, Milan Michalek, Tobias Lindberg and a 2017 second-round pick.

Cowen was bought out by the Leafs. Greening and Michalek were buried in the AHL with the Toronto Marlies and Lindberg has found some success with the Marlies over two seasons so far. He’s also seen six games with the big club adding two assists. But at 21, he still has potential to be an impact with the big club.

As for the pick, it still has chance to play out into a successful piece for the Maple Leafs. It’ll take even more than seven years for us to re-analyze just how valuable this pick might end up being. That being said, was there really a winner in the Phaneuf-Stajan trade from seven years ago?

Toronto or Calgary: Who Won the Trade?

With all the movement over the past seven years, it’s hard to really decipher if one team did better because of the trade than the other. Stajan continues to be a mainstay in the Flames’ lineup even though he’s like a third or fourth line player on their depth chart now.

On the other side of it, Phaneuf led the Leafs against other team’s top players for years and was crucified quite often for his play in a Toronto uniform. That being said, he averaged almost 0.5 points per game during his time as a Leaf defenceman and brought back both Lindberg and a second-round pick in 2017 when he was shipped to Ottawa.

So, while it still may be hard to call a clear-cut winner in this trade, some would argue that Toronto is in a better place than the Flames because of the move seven years after the fact.