One of the more lighter aspects of hockey that we fans like to “break down” is whether teams look good or bad on the ice. In other words, how slick do their sweaters (not jerseys, sweaters) look? Are they attractive? Are they ugly? Are they boring? Do they have too much going on? Sometimes change can be good, but more often than not original team sweaters are the best. Here are eight teams that should go back full time to their old sweaters.

The Sharks have made numerous alterations to their sweaters since being born in 1991. They have also made one significant alteration to their main logo. Almost all Sharks fans agree that the old logo and original jerseys are a classic (and better) look. For some bizarre reason, the Sharks have never had a single throwback sweater night since making the major logo and jersey change prior to 2007-08. The pictures below are of Brent Burns in the current sweater and Evgeni Nabokov circa 2004.

How boring and ugly are the current Anaheim Ducks sweaters? They almost look brown on their shoulders in the shot below of Ryan Kesler. The old school teal and purple jerseys were awesome. An original color scheme that neither the Ducks nor Major League Baseball’s Arizona Diamondbacks should have changed. 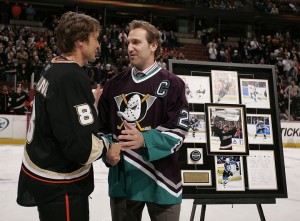 Calgary Flames (Get Rid of the Black)

The Calgary Flames haven’t done a whole lot to their jerseys over the years, but the changes they have done haven’t been for the better. Calgary should go back to the sweaters from the old days with the white C on the orange/red background instead of the current black added to the uniforms.

Arizona Coyotes (Bring Back the Originals)

There are too many teams in professional sports who wear red. Why did the Coyotes change from their terrific and unique look to these boring crimson red sweaters? Those old sweaters worn during their Jeremy Roenick days were things of beauty. Now, they wear some of the lamest looking sweaters in the league. 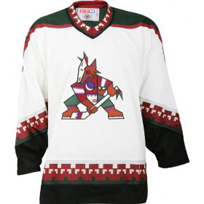 Technically speaking, the Sabres already went back to their original style sweaters. However, the blue and yellow color scheme is too similar to the St. Louis Blues. Not to mention the Sabres recently fell flat on their faces with a terrible third jersey in the picture below. Yellow with blue and gray? It is one of the worst jerseys of all time. In order to save some face, the Sabres ought to go back to the look they had for a few years in the 2000s with the big Buffalo head logo outlined in silver/gray, red, and black.

There are a number of attractive black sweaters in the NHL. Personally, I love the Sharks third black sweaters, but the Penguins main black sweaters are better with some yellow added in for contrast. The yellow infused jersey has much more flare than their current main blacks.

The current Jets franchise came up with a cool new logo and color scheme. That said, the sweaters worn by the first Jets franchise need to be brought back full time. The new jerseys have served their marketing purpose, now the throwbacks should be the norm again.

The Capitals current red jerseys are incredibly boring. Remember the classic on his back goal scored by Alexander Ovechkin when he first came into the league? Bring those back!

Agree or disagree with any of these teams reverting back to their former sweaters? Did I miss any franchises that you think belong on this list? Leave a comment below!