SUNRISE, Fla. — Nick Ritchie broke a tie with 1:28 left with his second goal of the game, John Gibson made 42 saves and the Anaheim Ducks beat the Florida Panthers 3-2 on Wednesday night.

Ritchie grabbed a loose puck in front and beat goalie James Reimer to the right side. 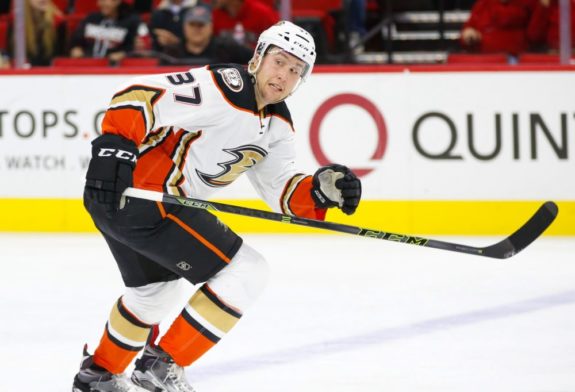 Josh Manson also scored to help the Ducks win for the fourth time in five games.

Dadonov gave Florida a 2-1 lead midway through the second period with a power-play goal. Dadonov redirected Jonathan Huberdeau’s shot from the point. The Ducks tied it at 2 at 12:28 of the second when Ritchie deflected Marcus Pettersson’s point shot.

Manson opened the scoring for the Ducks 15 seconds in, the second-fastest goal in Ducks history. He got the puck at the blue line off the faceoff and his shot bounced off Florida’s Bogdan Kiselevich and past Reimer. Paul Kariya holds the team record of eight seconds, set March 9. 1997, at Colorado.

Ekblad tied it at 3:01 of the second. Aleksander Barkov passed from behind the net out to Ekblad in the right circle and Ekblad one-timed the puck past Gibson.,

NOTES: Panthers D Keith Yandle played his 738th straight game to take sole possession of sixth place on the consecutive games list. Yandle last missed a game March 22, 2009 when he was with the Coyotes. … Panthers coach Bob Boughner said goalie Roberto Luongo, out with a knee injury since Friday, might return to the lineup on Friday or Saturday.

Ducks: At Carolina on Friday night.