Despite a fifth consecutive Pacific Division title and a run to the Western Conference Final in 2016-17, one name was conspicuously absent from the list of the Ducks’ top couple of goal scorers.

Corey Perry, one of the NHL’s elite scorers over the past decade, did not even crack the 20-goal mark, as he finished with just 19 tallies—his lowest output since 2006-07 (excluding the lockout-shortened 2012-13 season, where he scored 15 goals in 44 games).

Is the 32-year-old Perry declining? Perhaps a little bit. The bigger cause for his drop in production, however, is simply bad luck, suggesting that his production will bounce back in the upcoming season.

I’ve touched on the intrigue of Perry’s outlier of a season before, but it’s worth giving it renewed focus here. In 2015-16, Perry racked up 34 goals and shot at a 15.8-percent clip. One year later, when his goal production dropped to 19, that coincided with his shooting percentage dipping down to 8.8 percent—again, his lowest mark since 2006-07. In addition, Perry’s goal production dropped by almost 50 percent from the previous season even though his overall ice time per game was actually identical across the two years (17:42 TOI/game in each of the past two seasons).

Of course, this is not merely a coincidence. Perry’s shots were not finding the back of the twine. Fewer shots going in means fewer goals and a lower shooting percentage.

Looking at Perry’s goal totals and shooting percentages over the past four seasons paints this picture pretty clearly. It’s not a perfect relationship thanks to some variation in shot totals, but the correlation is high. 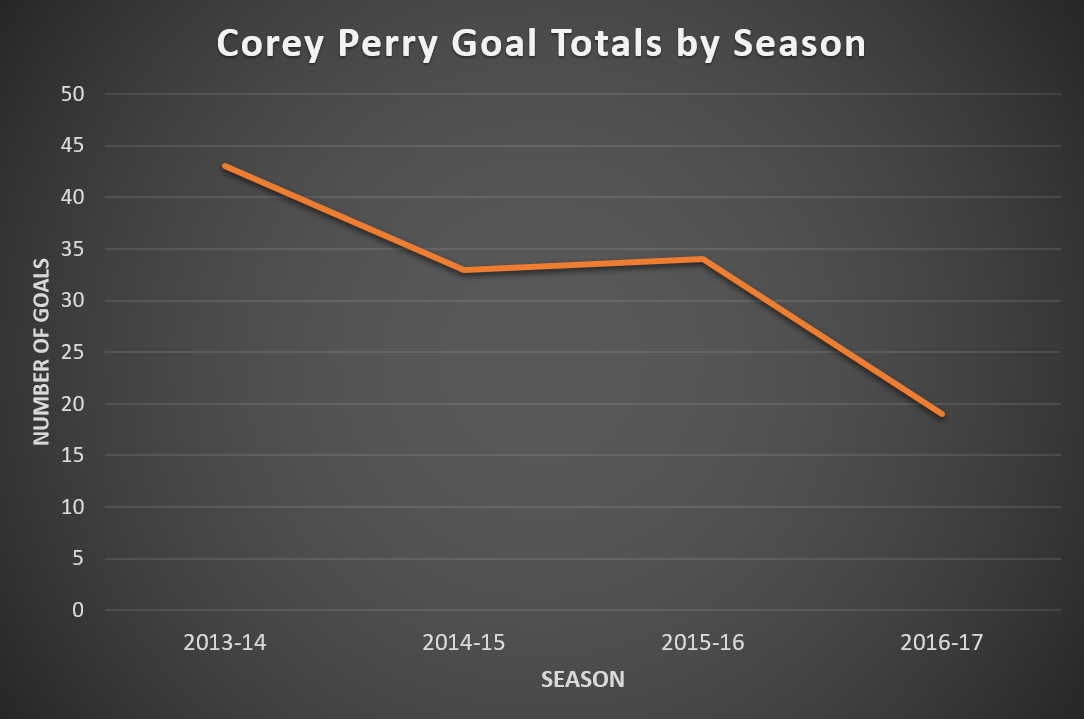 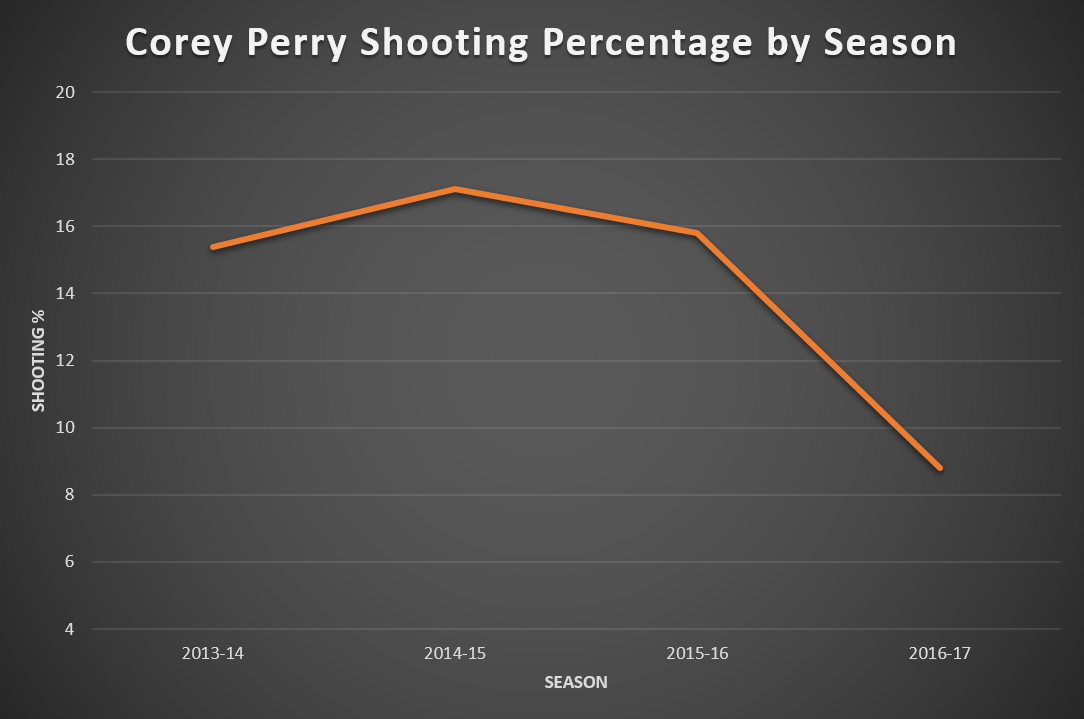 Last season stands out as a glaring aberration. Why the precipitous drop? As I pointed out when evaluating the long-term Cam Fowler contract, teams have to be mindful of the fact that players often decline quickly and dramatically once they hit the wrong side of 30, but the drop in shooting percentage necessitates a bit of a deeper look.

The answer for the nosedive in Perry’s shooting percentage and goal totals might be as simple as bad luck. When players age and inevitably decline, their foot speed is typically one of the first things to go. For snipers like Perry, hand quickness and shot accuracy are skills that should and usually do remain, at least for a longer stretch of time than others. Thus, Perry’s low shooting percentage probably does not much to do with any loss of ability in that area.

At the conclusion of the regular season, Perry acknowledged his struggles but also indicated that he felt good about his game and just was not getting the bounces.

“I’ve said this all season,” Perry said. “I was getting my opportunities. I was getting my shots. Whatever you might call it—luck, puck luck, whatever it is—the thing wasn’t going in the net.

“Those things happen. You go through during a season, during your career, those things to happen. You just try to stay focused and try to focus on the positives.”

Much to Perry’s point, the truth is that his overall game was still strong. He still drove possession at a decent rate and was on the right side of the scoring chance totals for the Ducks relative to their opponents.

Late in the season, Perry was not even playing on Ryan Getzlaf’s line as he so often has throughout his career. Patrick Eaves and Rickard Rakell took the wing spots on that top line. So, from a possession and chance-generation standpoint, Perry was still holding his own without Getzlaf.

Adding to all of this is that Perry reportedly played most of the season with a sprained MCL. It’s impressive that he still produced as much as he did and was an overall positive contributor in that condition. While a knee injury would seem to affect skating, speed, and agility more than anything else, it could have possibly had some effect on his ability to generate optimal power and precision on his shots. That combined with his aforementioned bad luck would lead to a drop in his scoring totals.

Corey Perry might not ever duplicate his 40-50 goal seasons of yesteryear, but there is plenty of evidence to suggest that he can get to the 30-goal plateau once again, as he was still effective last season in the other parts of his game. With emerging younger scorers like Rakell and Jakob Silfverberg, the Ducks have already proven to be potent enough to win consistently even when Perry is not lighting the lamp with great regularity. If his numbers come back up, Anaheim will be that much more dangerous.