Anaheim Ducks general manager Bob Murray’s decision to send Max Comtois — who was 19 years old at the time — back to his junior team in November was a difficult one considering the success he had at the NHL level. Fortunately, Comtois’ move to the Quebec Major Junior Hockey League’s Drummondville Voltigeurs hasn’t been a bad thing for Anaheim. In the aftermath of team Canada’s early exit from the IIHF World Junior Championship, Comtois has shown leadership and competitiveness that the Ducks will need in the upcoming seasons.

Comtois Keeps Cool in the Face of Abusive Fans

Comtois’ tenure as captain of the Canadian World Junior team started with a bang. He led Canada in their tournament-opening 14-0 blowout win over Denmark with four goals, but after such an encouraging start, things went downhill.

First, he endured jabs from opponents and the media about perceived diving incidents, and things only got worse as the tournament continued. He managed only one goal and one assist in the remaining four games, and missed a game-winning penalty shot in overtime against team Finland in the quarterfinals. What’s worse, Finland scored less than five minutes later to eliminate Team Canada from the tournament.

Immediately following the game, Comtois demonstrated composure and class that any NHL GM would love to see from a young prospect who floundered in a high-pressure situation.

“I knew what my move was going to be, and it’s not the first time I’m going to miss an important one,” Comtois told TSN. “I’m just going to dig in, and hopefully, if I get one more chance in my career, I’ll just try to bury it.”

In what became one of the major stories of the 2019 World Junior Championship, Comtois endured cyberbullying on his Instagram account that one politician even labeled “anti-francophone racism.”

To add insult to injury, or in this case, injury to insult, the Ducks revealed that Comtois played most or all of the tournament with a separated shoulder.

It’s safe to say his experience as the captain of team Canada was not an entirely enjoyable experience. In spite of that adversity, he excelled when he returned to the QMJHL, something that should further encourage Anaheim’s GM.

NHL GMs face a difficult choice when it comes to sending one of their young prospects back to major-junior when they can’t play in the AHL. If a young player remains in the NHL, he might not play enough to continue his development. Conversely, major-junior might not present enough of a challenge for that player.

Murray ran that risk with Comtois because the young winger already produced at more than a point-per-game pace in the QMJHL last season, and added seven points in 10 games at the NHL level to start 2018-19. Luckily, since he’s come back from his separated shoulder and the disappointment of the WJC, he has been on a rampage.

He has played 18 games after returning from his shoulder injury; in that time, he’s notched 34 points (23 goals, 11 assists). For those of you who aren’t the best at math, that’s almost a two-point-per-game pace. Sixteen of those points came in a single week, and that offensive eruption won him the Canadian Hockey League’s Player of the Week honors for the week ending Feb. 17.

During his time in major-junior, Comtois has never played on a team that has made it past the semi-finals of the QMJHL’s President’s Cup playoffs. This season, his team, the Voltigeurs, are one of the best squads in the QMJHL and a threat to win the league’s championship, the President’s Cup.

If they win the President’s Cup, he and the Voltigeurs have a chance to compete in the Memorial Cup, awarded to the winner of the entire CHL playoffs. 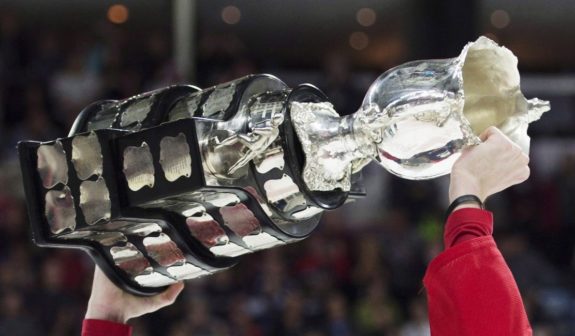 The Memorial Cup playoffs are a valuable test for young NHL prospects and the tournament’s most valuable player award, the Stafford Smythe Memorial Trophy, often goes to a future NHL superstar. The past five winners have been Sam Steel (the Ducks hope he turns into a superstar), Dylan Strome, Mitch Marner and Leon Draisaitl. If the Voltigeurs qualify for the Memorial Cup playoffs and make a run, you can bet Comtois’ name will be in the running for MVP.

After Murray fired Randy Carlyle and took over the Ducks’ head coaching duties, he said himself that he was worried about player leadership. He told the media,

“Not everybody has leadership capabilities. There are leaders and followers. I have too many guys following. There should be people leading here. One of the biggest things I have to determine here is if I have people that can do that. I thought we did. I haven’t given up on them yet, but I’m very worried.”

The team has performed better lately, winning four of its last seven games, but leadership is still a question going forward. With captain Ryan Getzlaf, and veterans Corey Perry and Ryan Kesler approaching the ends of their careers, the Ducks need to find their future leaders and Comtois fits that bill.

If there’s one big benefit to Comtois’ time in the QMJHL this season and playing for Canada, it’s the pressure. He’s shown that he can withstand adversity, and flourish on the ice. With the QMJHL playoffs approaching and maybe a Memorial Cup run, there’s potential for him to grow even more, which the Ducks and their fans should be excited about.