He may not know it, but Andrej Nestrasil is part of a long-standing rivalry with his former team.

Now, the Detroit Red Wings and the Carolina Hurricanes may not have a rivalry in the traditional sense. After all, the Red Wings are an Original Six team with a long history of success and the Hurricanes…aren’t. In either sense. About the only time the two teams had any sort of rivalry on the ice was in the 2002 Stanley Cup Finals, where the heavily underdog Hurricanes shocked the hockey world by winning Game 1, but ultimately fell to the Red Wings in five games.

However, off the ice, the rivalry has been anything but quiet. Hurricanes owner Peter Karmanos and Red Wings owner Mike Ilitch have a bitter history with each other, one that extends even today. So when the Hurricanes hunted for a new head coach in the offseason, it should come as no surprise that a former Red Wings coach was among the candidates interviewed. 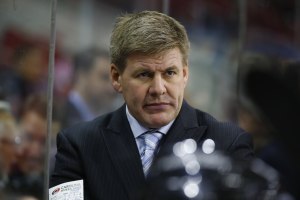 Bill Peters had served as the Red Wings assistant coach since the 2011-2012 season, working primarily with Detroit’s defensemen and the penalty kill. No doubt, his work in those areas influenced the Hurricanes’ decision to interview him. After all, one of the biggest issues in Carolina for almost a decade has been their defensive lapses, and the penalty kill was only a few years removed from being ranked 28th in the league at 77.6%.

What ultimately caused general manager Ron Francis to hire Peters as the new head coach is known only to Francis himself. The first-year general manager said that he was impressed with Peters’ attention to detail, having brought a player-by-player breakdown of the team to the first interview.

“He’s extremely, extremely detailed,” Francis said at the announcement of the hiring. “He’s going to communicate with our players. Our players are going to know where he stands, and there’s no little detail that (will) be overlooked.”

The decision to hire Peters did not sit well with the Red Wings organization. Shortly after the Canes hired their new coach, a report came down the press wire announcing a change regarding organizations poaching management from opposing clubs.

Today, NHL also approved compensation for a team losing someone hired to be head coach, GM or President/Hockey Ops with another club (1/2)

Generally, we're talking a third-round draft pick, and the club doing the hiring will have a window of three years to give it up.

It was an item that no doubt saw some support from the Red Wings organization, having just lost Peters and losing former assistant general manager Jim Nill to the Dallas Stars a year earlier.

Peters had a rocky start to his head coaching career. The Hurricanes went 0-6-2 in October, and were basically out of the playoff race before it even began. It must have been an unfamiliar position to be in for Peters, as the Red Wings have made the playoffs for 23 straight years (and counting). Perhaps the awful start to the season was a blessing in disguise for the Canes, as it gave them high priority in the waiver wire. So when the Red Wings were forced to send Nestrasil through waivers early in the season, Carolina jumped at the opportunity.

Though Red Wings coach Mike Babcock believed that Nestrasil needed more time to develop in the American Hockey League, the Hurricanes gave the younger player an opportunity to play in the NHL. It’s an opportunity that he is not letting go to waste. After putting up only 2 points in the 13 games with the Red Wings, Nestrasil has 15 points in 25 games with the Hurricanes, and he’s looking more and more comfortable with each passing game.

A Part of the Change in Culture

At 6’3″, 200 pounds, Nestrasil is exactly the kind of player that Peters was looking for when he first came to Carolina. He noted the struggling special teams and the lack of physical play that the Canes have displayed in the past.

“We’ve got to become a harder team to play against here in Raleigh,” Peters said. “We need to work hard and we want to make sure we’re organized so our team can be organized. We want to be a hard-working team.”

This year, the special teams have been in the Top 10 in both categories for the first time since the 2000-2001 season. The Canes, as a whole, have been more physical and more in line with a puck possession game than they have in years past. Andrej Nestrasil has been a big part of that change.

“It’s getting better,” said Nestrasil. “I was in the Detroit organization for six years and knew everybody and everything. Here, I haven’t been around, but it’s getting better over time. It’s a good group of guys and I like it here.”

Perhaps in an ultimate twist of irony, the rivalry between the owners of the Hurricanes and the Red Wings has caused Carolina to try to become what Detroit has been for the longest time: A consistently successful team that relies on hard work and puck possession to win games. They hired Peters because he knew Detroit’s system, they grabbed Nestrasil for the same. If Peters continues to improve the team as he has this year, and if he brings that long-awaited winning culture to Carolina, Peter Karmanos may have Mike Ilitch to thank.