ANAHEIM, Calif. — Nick Schmaltz scored 33 seconds into overtime and the Arizona Coyotes rallied from a two-goal deficit to defeat the skidding Anaheim Ducks 5-4 on Saturday night. 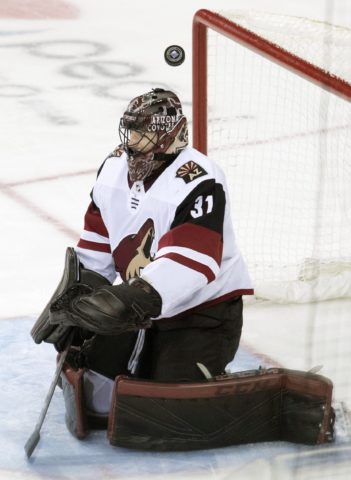 The Coyotes trailed 4-2 less than nine minutes into the second but tied it before the period was over. Oliver Ekman-Larsson, Christian Fischer, Nick Cousins and Jakob Chychrun also scored for Arizona, and Adin Hill stopped 37 shots.

Alex Galchenyuk and Clayton Keller each had two assists. Schmaltz and Ekman-Larsson also had assists for multi-point games.

Ondrej Kase had two goals for the Ducks, who have dropped five straight. Daniel Sprong and Adam Henrique also scored. Nick Ritchie had three assists and John Gibson made 25 saves.

Kase opened the scoring 46 seconds into the game when he flipped a backhand past Hill on a breakaway. It was the second-quickest goal for Anaheim to start a game this season.

The teams then traded power-play goals on one-timers.

Sprong gave the Ducks a two-goal advantage when he took a pass from Jakob Silfverberg less than 14 minutes in for his fourth of the season. Ekman-Larsson got Arizona on the board with 17 seconds remaining in the first when he scored from the faceoff circle off a feed from Galchenyuk for his fifth.

Henrique got his eighth when he converted a turnover deep in the Coyotes end for his eighth 12 seconds into the second. Arizona answered eight minutes later when Fischer took a wild carom off the boards that Gibson was unable to corral and fired it into the net while falling to the ice.

Kase got his second goal 12 minutes into the second when he was in front and redirected Ritchie’s shot for his 11th. But the Coyotes rallied to tie it with a pair of goals 39 seconds apart when Cousins and Chychrun both beat Gibson up high.

NOTES: Arizona has taken two of three in the season series, with two meetings remaining in March. … Henrique’s goal was the quickest score at the start of any period by the Ducks this season. The previous fastest was when Rickard Rackell scored 14 seconds into overtime against Edmonton on Nov. 23. … Sprong has four goals in 11 games for the Ducks since being acquired in a trade from Pittsburgh on Dec. 3.