The Colorado Avalanche have 28 games under their belt and are one-third of the way through their season. How do they measure up?

The Avalanche launched into the first third of the season with one of their hottest starts in a decade. The contributions came from team efforts and individuals.

The Avalanche set themselves apart from the franchise’s recent history. Their first 28 games of the season have marked a difference in both the standings and the statistics.

Through 28 games played, the Avalanche sat in fifth place in the overall standings with 37 points to their name from a 16-7-5 record. Among Western Conference teams, they ranked second, behind the Nashville Predators. The Avalanche made it to second place in the highly competitive Central Division as well. The Winnipeg Jets trailed the Avalanche by a single point with a game in hand. The Central Division had four of the top six teams in the Western Conference and five of the top eight. The Central appeared to be headed for ‘group of death’ status again.

Along the way, the Avalanche had an 11-game point streak and a six-game road winning streak.

Colorado’s power play helped propel the team forward as it ranked first in the league, converting on the man-advantage 32.2 percent of the time. Their power play was nearly three percent more effective than the next-highest contender.

While not as dominant as last year, the Avalanche’s penalty kill unit ranked 13th in the league at the one-third mark. They successfully killed the 80.4 percent of their shorthanded situations. It’s also important to note the Avalanche were shorthanded more often than 28 other teams in the NHL. Only the Anaheim Ducks and the Canucks had more calls go against them, and they had each played two more games than Colorado. While some of the special team players haven’t gotten much recognition, their contributions have been substantial. 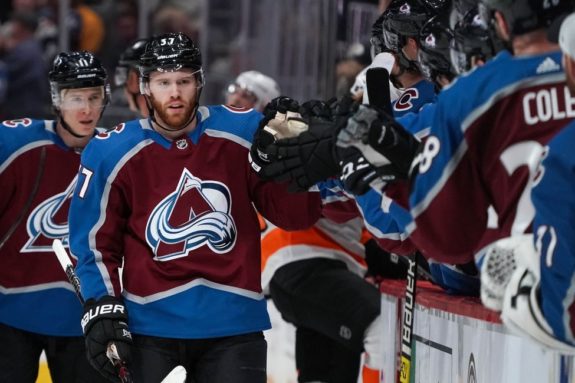 J.T. Compher has been a key contributor to the Avalanche’s penalty kill. (Troy Babbitt-USA TODAY Sports)

The Avalanche ranked third in the league in goals scored, tied with the Maple Leafs at 102 goals notched. The team averaged 3.64 goals per game, tied for second in the NHL. Colorado iced the 10th-stingiest team in goals allowed, surrendering only 79 goals over 28 games.

The Avalanche sat in a second-place tie (with the Predators – who else?) for best goal differential in the NHL with a plus-23. They trailed two Atlantic Division teams who tied for first place – the Toronto Maple Leafs and the Tampa Bay Lightning. It’s not a coincidence both those teams sat atop the NHL leaderboard for points as well. 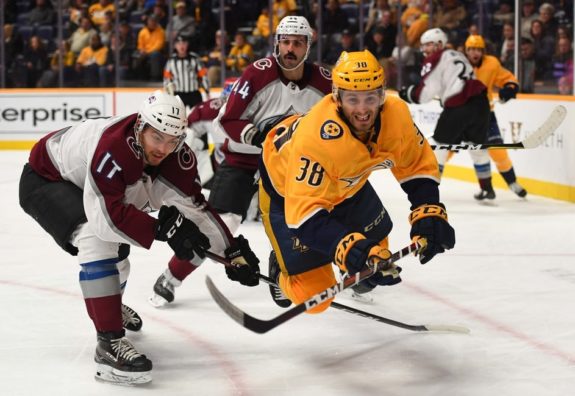 The Avalanche are chasing the Nashville Predators atop the Western Conference. (Christopher Hanewinckel-USA TODAY Sports)

In the “not a surprise” category, the Avalanche sat dead last in face-offs. They won 46.6% of the puck drops so far, placing them at the bottom of the NHL. However, they have improved since the start of the season so there’s a bit of a silver lining.

The other item that’s not much of a surprise – the Avalanche have lost five games in overtime, tied with seven other teams for most overtime losses. For a team that plays with skilled young guys, Colorado’s 3-on-3 plays has been…ugly.

The Nathan MacKinnon-Mikko Rantanen-Gabriel Landeskog line dominated hockey through the first third of the season. The “line of fire” combined for 120 points over the course of 28 contests. They were involved with 56 percent of the Avalanche goals. MacKinnon and Rantanen were tied for most multi-point games, in first place with 15 games apiece. Rantanen earned the most NHL road points to date, followed by MacKinnon in second. All three of them contributed on goals together 16 times.

MacKinnon’s performance landed him the NHL’s second star of the month honors for November. He earned 23 points in November, putting him in a tie for most points scored in the month. He also tied Peter Forsberg’s Avalanche record for most points scored in November which was set in 1996-96. He ranked second in the league in points. Nate the Great also led the league in number of goals created while placing second in number of even-strength goals scored.

Rantanen was the first star of the month for October. Rantanen led the NHL in points and assists after 28 games and finished third in points for the month of November. He also earned 20 points in back-to-back months which hadn’t happened for the Avalanche since 2002-03 (Forsberg had three months of 20 or more points in a row).

Landeskog placed third in the league in plus/minus, 11th in goals scored and 17th in points. The captain proved especially scary when playing 5-on-5 as he ranked ninth in even-strength goals scored. But Landeskog really shone when considering game-winning goals where he tied for first place in the NHL. It’s also worth noting that while the team struggled with puck drops through the first third of the season, Landeskog did not. The captain won 54.8% of his face-offs, good enough to place 21st in the league.

Goaltender Semyon Varlamov did his part to help the Avalanche’s hot start. He saved .923 of the shots at the net, good enough to put him ninth in the league. His goals-against average placed him 11th. And he managed to rank 10th in number of wins. While not dominating the league, Varlamov provided a solid presence in net over the first third of the season. 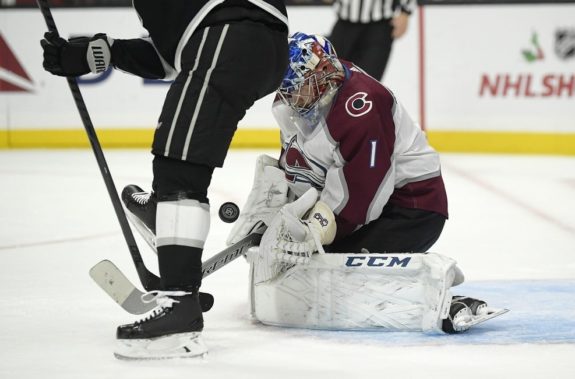 Semyon Varlamov has been a solid presence in the Avalanche net.  (AP Photo/Mark J. Terrill)

Defenseman Ian Cole brought a stabilizing presence to the Avalanche. He led the league in blocked shots 28 games into the season. His physical style of play also racked up the penalty minutes, ranking sixth in the league for penalty time assessed. Cole racked up a plus-nine and scored nine points.

Tyson Barrie also made substantial contributions on the blue-line, particularly when it came to scoring. His 21 points placed him eighth in scoring among defensemen despite missing four games due to injury.

Overall, nine players on the team managed double-digit scoring throughout the first third of the season. Seven defensemen earned at least a point. Secondary scoring really improved as the line combinations settled after the initial juggling.

Should the Avalanche be able to sustain their hot start, they could easily be the second seed in the Central Division and if they continue to improve, they might even be able to top the Predators.

If the Avalanche continue at this pace, they could end the season with 108 points. Because they are in the Central, they’ll need every point they can get to secure home ice for the first round of the playoffs. The Nashville Predators have been the leaders in the Central for a long time. 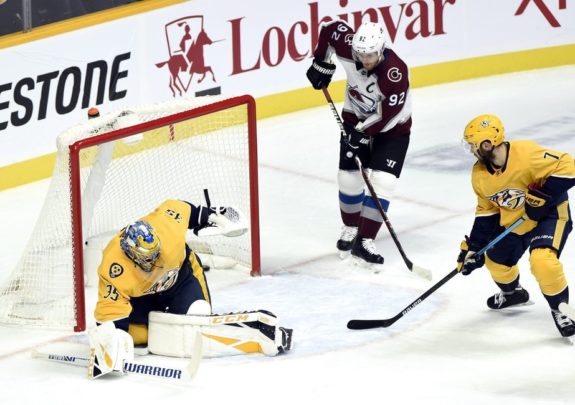 It’s amazing to even be considering playoff spots for Colorado. That it’s even reasonable in a conversation upsets any wager. Their 48-point season was just two years ago. In the 2016-17 season, the Avalanche had 23 points after the 28th game. That’s a 14-point improvement in two years.

The last time the Avalanche broke the 30-point mark after 28 games was in the 2009-10 season. They racked up 35 points and lost to the San Jose Sharks in the first round of the playoffs.

The fans have noticed the difference as well. While attendance last year improved, this season has seen nearly sold out games. There were times in the past few years when opponents’ fans outnumbered Avalanche fans. But those days are gone. The Avalanche have proven to be an exciting team people enjoy rooting for and the fans have returned.

Rantanen’s 46-point pace may be hard to maintain throughout the season. MacKinnon’s 43 points through 28 games could also be hard to sustain for the season’s duration. It’s unlikely Rantanen racks up 134 points for the season. But even a little cool down will keep the trio near the top of the NHL leaderboards. 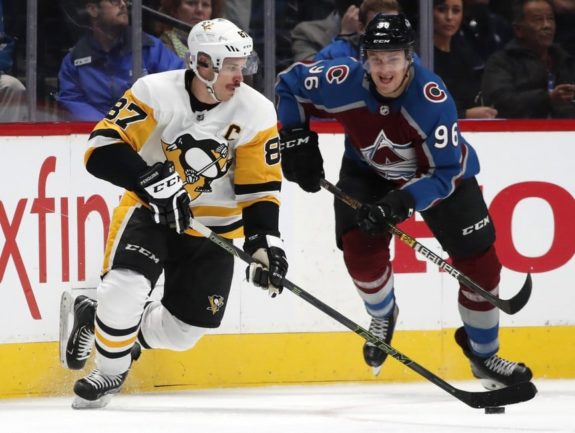 The Avalanche also have other weapons in their arsenal. They have quality goaltending, talented depth and a solid blue line. The team overcame a host of challenges that plagued them two years ago. Two-thirds of the season remain.

Colorado looks poised to freeze out its opponents and bury them under an avalanche of scoring. Anything is possible, but it’s a great start for the Avalanche and the view, from the top of the standings is a refreshing change.