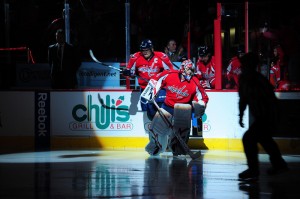 As fans we pride ourselves on knowing everything there is to know about our favorite team. Despite that, many Caps fans don’t know one of the team’s integral members, equipment manager Brock Myles.

Myles is in his sixth-season as the head equipment manager with the Capitals, having served time in the Ontario, Kontinental and American leagues, but now he calls Washington home. Myles hopes to bring big wins to the capital city. I chatted with him about his players, the game and his role on HBO’s 24/7.

How does getting ready for practice compare to a game?

Myles: People I’ve met and the friends I’ve made along the way.

Myles: The job description has changed over the years, we handle a lot of paper work and administrative work instead of physical hands on work with the players. I’m in the locker room or on the phone, ordering supplies, budgets, travel and doing those types of things. It takes up a lot of your time. You’re not as close with the players as you are in the juniors, but that’s because you can’t be in three different places at once. I get along great with all the players, that includes coaches and other trainers. We’re all professionals.

What’s the strangest special request you’ve ever had from a player?

Myles: One I can remember is players wanting their sticks in the trashcan between periods because they thought it would get them a garbage goal. They would come off the bench saying ‘put this in the trash’ and some stick boys would think they want the stick thrown out thinking it was broken, but I’d say ‘no, no, no, that’s what he likes’. I’ve had players drink Coke on the bench, stuff like that, it’s all about what makes them tick.

How do you prepare for equipment emergencies?

Myles: You have to be organized and have plenty of equipment on the shelf. Then you’re about as prepared as you can get. Last night Tomas Vokoun took a Zdeno Chara slapshot right in the cage, it dented his cage almost a millimeter from his nose, as soon as he came off we had to change his mask right away, and obviously you want him to use his game mask, not his backup. We had 17 minutes to change his cage and as usual you have a screw that’s rusted. I handed him his mask just in time so he didn’t have to wear his backup.

Myles: After the first day or two the guys blended in really nicely. They understood how we worked and it worked out pretty smooth. After it was all said and done we kinda missed some of the guys on the crew. They were total professionals, from what I heard from all the guys we still talk to everything went smooth.