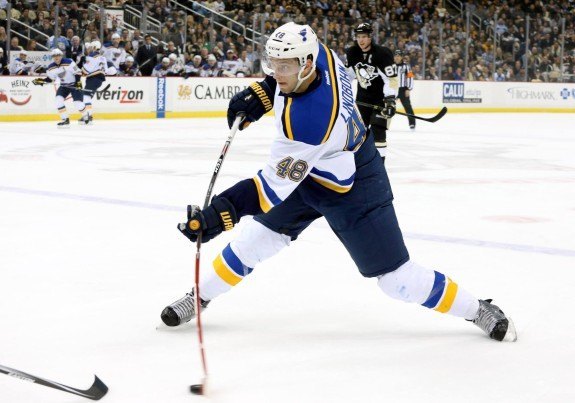 The defensive depth currently enjoyed by the St. Louis Blues is both boon and bane. Head coach Ken Hitchcock has eight healthy skaters to choose from in his defensive corps, but sometimes a team can have too much of a good thing.

As the season began the defensive depth was rounded out by a couple of guys eager to prove they belonged in the Top-Six and a rookie looking to make the jump from the AHL to NHL. Ian Cole appeared to have (finally) earned a starting spot and Chris Butler was there to challenge him for it. Petteri Lindbohm impressed in camp and was showing he could play with the big club.

Injuries to top guys would see the lineups shuffled and Cole playing regular, third-pair minutes while Butler filled in admirably as Carl Gunnarsson recovered fully from off-season surgery and Jay Bouwmeester missed time on IR. Lindbohm was the natural choice for a 10-game call-up when an extra body was needed in December and was brought back again in February for two dozen more appearances.

Defensive depth was, apparently, first in the mind of Blues GM Doug Armstrong at the 2015 NHL Trade Deadline, when he brought in not one, but two defensive reinforcements: Robert Bortuzzo from the Pittsburgh Penguins and Zybnek Michalek from the Arizona Coyotes. Bortuzzo was swapped for Cole, who reportedly wanted more playing time. Michalek hadn’t played in weeks due to concussion symptoms and wasn’t immediately ready for action. 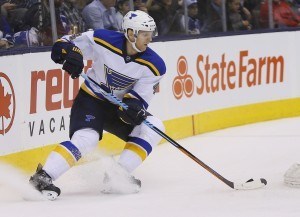 Bortuzzo has made his presence felt from his first game wearing the Bluenote and quickly endeared himself to St. Louis fans and his teammates with his stand-up, physical style of play. Bortuzzo has also been consistently making crisp, accurate passes out of his own zone, giving the Blues a much-needed shot in the arm on the back-end of their game. Michalek’s affinity for shot-blocking was well know prior to joining the club and he’s played regularly since finally getting back into game action.

Those moves were aimed at relieving uncertainty about Shattenkirk’s return after missing two months of hockey but Shatty is now back in the daily lineup. Carl Gunnarsson is also healthy and playing again after missing a few games with concussion-like symptoms, giving St. Louis an arguably stronger corps of eight defensemen than most teams in the league. That number doesn’t even include Lindbohm who is back in Chicago for their own playoff push, despite having won over many in the media and fan-base with his tenacious, physical play.

Defensive depth such as this poses a potentially welcome problem for coaches: Who sits? With Alex Pietrangelo, Shattenkirk, Bouwmeester, and Barrett Jackman all but guaranteed starting spots, Hitchcock has Gunnarsson, Bortuzzo and Butler to fill the bottom two spots, and many believe Lindbohm earned the right to stick with the Blues as well. That’s NINE NHL quality defensemen for St. Louis. Jackman received a day off and logic would dictate seeing at least one of those other starters getting one down the stretch.

Hitchcock has shown a propensity for playing veterans regardless of performance, and that could lead to some guys playing tired or less than 100%. I’m looking at you, Jay Bouwmeester. With such extensive defensive depth that shouldn’t be an issue though I worry the lines will be juggled too frequently, further fouling the chemistry that’s been lacking over the course of the regular season due to injuries. The Blues have seven games to figure it out.