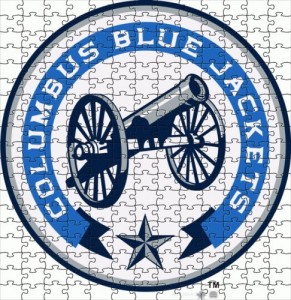 On the heels of two losses — the first a “we woke up too late” 3 -2 road loss to the Minnesota Wild, and the second a listless 4-1 home loss to St. Louis that  had coach Todd Richards scratching his head over the quality of effort — the Columbus fan base approached last night’s contest with the Red Wings with a significant amount of trepidation.  What team would take the ice?   Did the front office misjudge the talent acquisitions . . . again?   Would there be signs that the players were finally getting on the same page?  The Blue Jacketsw responded last night, with a 4 – 2 victory over Detroit that was equal measures effort and skill, and provided the assembled 17,612 with a glimmer of hope that the pieces of the puzzle are starting to drop into place.

While Detroit briefly took control of the game in the middle of the first — outshooting Columbus 9 – 0 over a stretch that culminated with Johan Franzen’s conversion of a Mason rebound at the 8:36 mark — that would prove to be the highlight of the Red Wings’ evening.  The Blue Jackets combined sound defense with aggressive offense and reliable goaltending to register their most complete effort of the young season.  The four goals scored was a season high, and the game marked the first time that Columbus entered the third period with a lead.  To be honest, the Blue Jackets likely could have had three or four more tallies, but squandered the opportunities.  Still, it was a quality of offensive effort that the club had not come close to displaying during the first eight games.

The Blue Jackets were able to gain entry to the offensive zone with increasing speed and confidence as the game progressed, and the time of possession in the offensive zone similarly increased.  Passes were crisper than they’ve been, and the squad found differing passing lanes — both at even strength and on the power play — which kept Detroit off-balance.  Brassard had some sharp passes just miss, Dubinsky showed terrific awareness, and Foligno, Johansen and Prospal also showed good puck movement.  Tyutin continued his scoring knack with two assists, John Moore played his best game as a Blue Jacket and Jack Johnson showed increasing presence in the offensive end.   When Wisniewski connected on a howitzer from the point with less than two minutes in the first, it more than tied the score — it marked the beginning of the Artem Anisimov Show.

Anisimov continues to impress, displaying new dimensions of his game each day.   His first of two goals was a thing of beauty — watch:

Apparently not content with the accolades from the first goal, Anisimov provided the following encore, again featuring a deadly ability to effectively move to the backhand:

While Anisimov’s antics took control of the game, an incident earlier in the period threatened to overshadow anything else that was happening on the ice.  Coming hard down the left side of the offensive zone, defenseman James Wisniewski tangled a skate with a teammate, and crashed awkwardly backwards into the end boards.  Wisniewski remained down for what seemed an eternity, attended by increasing numbers of medical staff.  Eventually, he rose and was able to skate off with assistance.  No hospital care was called for, but the presumption was “at least” a concussion.   Officially, of course, it is simply an “upper body injury”, and it will likely be Monday before a prognosis is revealed.

The third period really illustrated the qualitative difference between this effort and those in the previous games.  Columbus began by killing off the remainder of a Jared

Boll, then did a good job of maintaining equilibrium through the middle portions of the period, refusing to go into “prevent defense mode”, despite a two-goal advantage.  However, when R.J. Umberger went to the box on a questionable goaltender interference call with 6:48 left, a feeling of unease crept into Nationwide Arena.  Too many Red Wings rallies have been seen in Nationwide Arena over the years, and fearing the worst has become something of an avocation for the fans.  However, this is a new crop of Blue Jackets.  Just 23 seconds into the power play, Brandon Dubinsky and Mark Letestu led a shorthanded break, with Dubinsky ultimately fining Letestu’s blade in the crease, and Letestu finding the net through Howard’s five hole.  4 – 1 Blue Jackets, and the exhales of relief fanned the flags in the rafters.  Brunner’s last-minute goal was little more than an irritating aferthought.

The highlights of this one were fundamental.  The offense spread the work around, with everyone contributing in some meaningful way — terrific passes, keeping pucks in (or out of) the zone, winning races/battles for the puck, and generally being more aware of where teammates were.  Defensively, the club was positionally solid, was harassing without taking unnecessary risks, and helped move the puck up ice quickly.  Savard was the weakest of the bunch, perhaps showing why he was a healthy scratch until the Nikitin injury.   Mason was solid, showed better rebound control and displayed that “smooth anticipation” that was characteristic of his rookie campaign.  He got across the crease, into position, without exposing the far corner.  For the first time, the club looked like a cohesive unit moving up and down the ice.

Skeptics will say that Columbus was lucky to catch Detroit on the tail end of a back-to-back engagement.   While that is a true statement, it really begs the point.  With the compacted schedule, every team will be entering or exiting a consecutive game string with regularity.  The victors at the end of the season will be those teams that managed adversity the best.  Columbus had an opportunity, took advantage of it, and did so in impressive fashion, showing elements of control and chemistry that had been lacking.  The challenge will be to do it consistently.

Keep in mind that in a normal season, last night’s game would have been the season opener, following eight exhibition games.  With lots of new faces, a lot of youngsters, and only a six-day camp, I had mentally pegged the club at 4-6 or so after the first ten.   At 3-5-1 after nine, they are on pace.  After beginning with one of the more brutal schedules in the league, the Blue Jackets now have five days off over the next seven.  That will help provide some injury recovery time, provide some practice time to develop chemistry and work on gaps, and hopefully insure maximum energy for the remainder of the home stand.  Without scoring contributions thus far from Dubinsky, Johansen and Umberger, an injured Atkinson, and other guys looking to hit their stride, there is a lot of up-side to this squad, as the investing guys would say.  That up-side provides room for optimism, which will only blossom further should the club provide efforts of the quality seen last night.